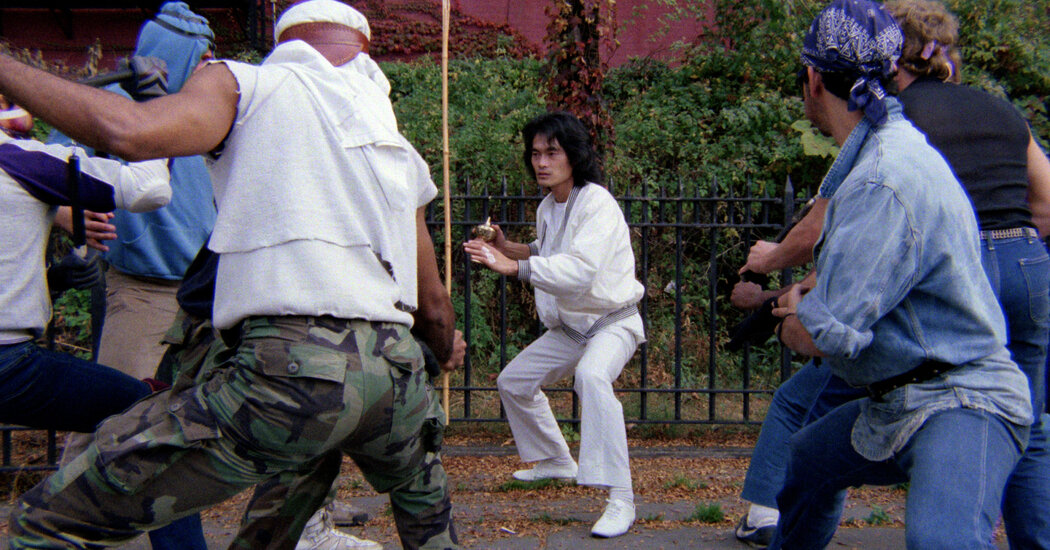 Kung fu fights on roller skates! An ex-C.I.A. Plutonium Killer who can peel off his own face! A battalion of kid ninjas! The promise of Dolemite himself, Rudy Ray Moore, as an insult-spewing police detective!

In 1984, audiences had never seen anything like the low-budget epic “New York Ninja,” in which the Taiwanese kung fu performer John Liu directs himself as a high-kicking sound man who avenges his wife’s death.

And despite lurid “Coming Soon” ads in the trade magazines (“WHEN YOU BACK A TIGER INTO A CORNER HE COMES OUT FIGHTING!”), audiences never got to see it in 1985. Or 1986. Or the ensuing three decades.

“It was one of those things that was on my résumé for years, but I never thought it would see the light of day,” the special effects artist Carl Morano said of “New York Ninja,” which vanished after its distribution company, 21st Century, went bankrupt and sold off its assets.

All that remained was a set of film reels with six to eight hours of footage. No audio. No credits or call sheets. No storyboards. Not even a script to explain who exactly the New York Ninja was fighting and why, let alone how the roller skates came into play.

Those reels eventually ended up in the vaults of the film distribution company Vinegar Syndrome, known for such disreputable titles as “Christmas Evil” and “Don’t Answer the Phone!” It took a two-year resuscitation effort for Vinegar Syndrome to bring “New York Ninja” to life. The result came out on Blu-ray earlier this month after a few raucously received appearances at genre film festivals, and a theatrical release is slated for early 2022.

Much of the reconstruction fell to Kurtis M. Spieler, who is credited as the new iteration’s “re-director” and editor. “What I tried to do was make the most coherent thing I could with the footage I had,” said Spieler, who spent evenings and weekends piecing together a workable edit and then writing a new script to match his cut.

This took some effort given the source material. “They had zero resources,” said Morano, who spent most of his estimated special effects budget of $100 on the Plutonium Killer’s melting face. “Different people showed up on different days. We’d meet every morning at the Howard Johnson’s where John was staying and then take a van to the location.”

When he arrived in New York, John Liu was already a cult figure in martial arts circles, known for his high kicks and his collaborations with the fight choreographer Yuen Woo-ping, who went on to work on films like “The Matrix” and “Crouching Tiger, Hidden Dragon.”

The huge popularity of Bruce Lee put a ceiling on just how familiar audiences were with Liu’s name, according to the film historian Chris Poggiali, a co-author of the new book “These Fists Break Bricks: How Kung Fu Movies Swept America and Changed the World.”

“At the time, the studios were doing anything they could to tie in with Bruce Lee,” Poggiali said. This meant changing Liu’s name on the posters. For example, the poster for the film “Hammerfist” billed Liu as Marty Lee.

By the time shooting on “New York Ninja” began in late 1984, one actor no longer attached to the project (if he ever really was in the first place) was Rudy Ray Moore. But Morano’s original shooting script, the only one known to exist, still alluded to “Detective Dolemite,” which made Morano wonder just how scrupulously the script was being followed. “My feeling is that they just kind of winged it,” he said.

Poggiali described the final result as “very different from a lot of the other ninja movies at the time.” As Liu’s character frequently slips away from his co-workers to put on his New York Ninja garb and then returns as if nothing had happened, “it’s more like a crime-fighting superhero film, like Clark Kent and Superman.”

The names of most of the original cast and crew are lost to time, and Spieler said Vinegar Syndrome tried to find Liu but wasn’t able to. This gave Spieler the chance to start fresh with the audio, commissioning a synth-heavy retro score by the Detroit band Voyag3r and fielding a murderer’s row of genre-film stalwarts to dub the actors.

Joining the likes of Don Wilson, a.k.a. the Dragon, and Cynthia Rothrock in the recording booth was the 1980s scream queen Linnea Quigley (“Return of the Living Dead”), who here dubs the voice of the frequently imperiled TV reporter Randi Rydell. “They said, ‘You’re playing the reporter, do what you want with it,’” Quigley said. “It seemed like fun — which is wild because I think they kind of wanted it to be serious.”

Or, if not exactly serious, at least not too campy. “We’re playing this straight,” said Spieler, who compared the final result to “Miami Connection,” “Samurai Cop” and other so-bad-they’re-kind-of-extraordinary titles. “We’re not trying to play up the silliness because it already comes through naturally.”

While it’s impossible to know for sure, Spieler said he suspects Liu wasn’t able to complete filming before the production shut down. “The ending doesn’t feel like it was ever finished,” he said. Vinegar Syndrome originally floated the possibility of filming new scenes, but Spieler was intent on working with what they had.

“I asked myself, ‘If my job was to have been an editor in the 1980s, what would I have done?’” he said. “This was how I could maintain the spirit of the original.” (In fact, he didn’t let himself look at Morano’s original shooting script until he completed his own version.)

Spieler believes that the intervening decades may actually have done “New York Ninja” some favors. “We knew it was campy and silly and over the top,” he said, “but we also knew it can be appreciated from a modern-day sensibility in a different way.

Plenty uses vertical farming to grow a high volume of leafy greens year-round. It plans to use the technology to grow other crops, including strawberries and tomatoes. Photo: Spencer Lowell…