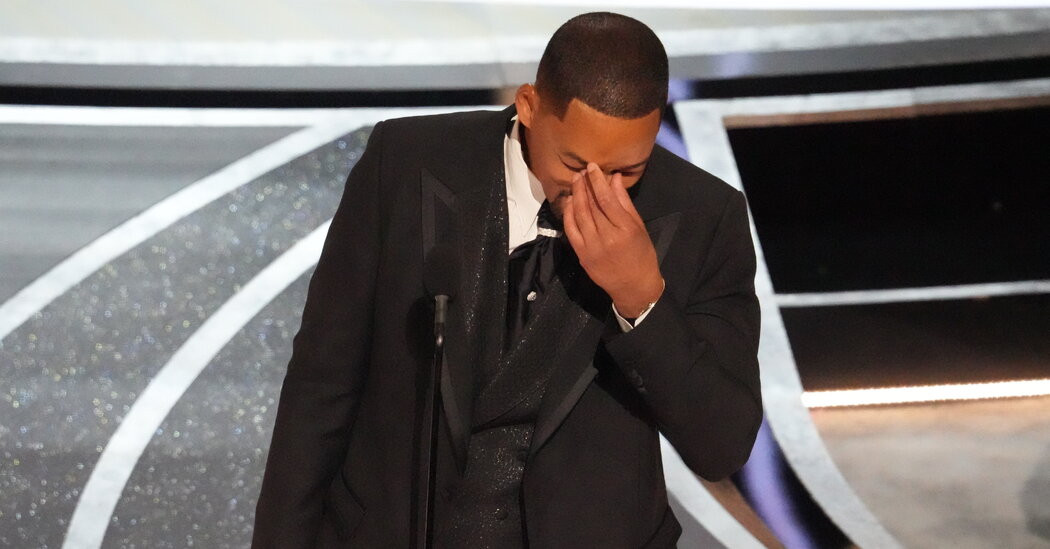 This pandemic is still killing us. The virus at its center is one of the body. But it’s also costing us our minds. A sacked Capitol building, an invaded and decimated sovereign nation, a raft of refugee crises, more American murders, more overdoses, more harassment — for being Asian, for being Black, for being trans, for being on the subway, for waiting to ride the subway. On Sunday, a couple of hours before the 94th Academy Awards, I watched a man drive the wrong direction down my one-way street. He wasn’t in reverse. His car moved with confidence, with joy, as if this was the way it should be. At the end of the block, he took a right. That was the wrong way, too.

So I don’t know why I was shocked when Will Smith got up from his seat that night and slapped Chris Rock. I actually wasn’t at first. I assumed, like lots of other people, that it was a bit because, by reputation, Will Smith walks on water. And surely, the crack that Rock had just made about Jada Pinkett Smith’s short, sharp haircut — that it looked like Demi Moore’s in “G.I. Jane,” a 25-year-old work of crypto-feminist trash — wasn’t the sort of joke one risks his reputation for. But these are now the times of our lives. Anybody could snap, even a man who was once one of Earth’s most beloved humans, even a man who, before he left his seat and swung, was poised to enjoy one of the happiest nights of his 53 years by accepting an Oscar for his role in “King Richard.”

I assumed it was a bit also because of the easy way Smith strolled up to Rock and both the compact efficiency of his swing and the physics of Rock’s absorption of it. There was some choreography in it, some second nature. Smith returned to his seat and proceeded to yell up at Rock. ABC had cut the sound. But it was clear by then that we were well beyond bit territory. Rage had pooled around Smith’s eyes. Lupita Nyong’o was seated behind Smith; the agape attention in her face was all but audible. “Keep my wife’s name out your mouth,” he could be seen saying, plus the expletive I can’t print here.

So why the eventual shock? For one thing, it wasn’t Kanye West who’d lost it. It wasn’t Martin Lawrence. It wasn’t Antonio Brown, whose erratic N.F.L. antics resumed in January when, in the middle of a Buccaneers-Jets game, he removed his jersey and pads, tossed his shirt and gloves into the stands and then ran off the field flashing a peace sign (this, for Brown, was mild). The source of Sunday night’s disruption is the winner of 10 individual Nickelodeon Kid’s Choice Awards. And the shock was its disturbance of the Oscars routine, a routine that both Smith and Rock were familiar with, as a three-time nominee and a two-time host. The show wanted to settle back into its routine after Smith seemed to calm himself. That was shocking, too. The show just … went on.

And yet it didn’t, not with the same disposable exuberance. Smith’s altercation with Rock occurred with an hour to go. And it began a journey through some strange entertainment prism of the Black male experience in this country. It was dominated by ’90s hip-hop stalwarts and capped by Tyler Perry, an artist whose movies the academy had never acknowledged but who lately tends to be on hand as a kind of dignitary. He kicked off the in memoriam segment with a tribute to Sidney Poitier, who died at the beginning of the year and whose enormous symbolic appeal Smith’s most evokes.

Rock had been invited to announce the winner of the documentary feature Oscar. Once he’d regained his post-slap composure, he read Ahmir “Questlove” Thompson’s name for “Summer of Soul” — well, what he said was, “Ahmir Thompson and four white guys,” which isn’t accurate. Questlove, like Smith, grew up making music in Philadelphia. And he, too, was overcome by where he found himself — expressing gratitude to his mother and late father, considering the canonical importance of his movie, which presents the 1969 Harlem Cultural Festival as a seamless outpouring of musical rhapsody.

Then, perhaps, the show’s second most astonishing event took place. Sean Combs arrived, wiser than I’ve ever seen him. He sensed, perhaps, that maybe we’d forgotten that Rock wasn’t the actual host and that the night had gotten away from Wanda Sykes, Regina Hall and Amy Schumer, the show’s official M.C.s, and asked the room to give it up for them. He then addressed The Incident. “I did not know that this year was going to be the most exciting Oscars ever,” he said. “OK, Will and Chris, we’re going to solve that like family at the gold party, OK? But right now we’re moving on with love.” Had anyone told me that the person who might follow an altercation between the Fresh Prince and the star and co-writer of the rap parody “CB4” with an offer of conflict resolution was the founder of Bad Boy Records, that this offer would be extended at the Academy Awards, and that this person had been invited to pay tribute to “The Godfather” for its 50th anniversary, I would’ve asked whether Combs was the last star alive. He knows from beef. And in the matter of skirmishes, he appears to be a vegetarian now.

That stretch of the broadcast said something to me about both how much farther Black people — Black men, especially — had come after centuries of American entertainment that for most of its existence had ignored their work and their existence. That stretch began in tastelessness, violence and pique, included the anointing of a divine achievement in nonfiction filmmaking and ended in a gospel-oriented celebration of the lives of the dead. Something had come full circle. A lot of odds had to be beat for these men — raised poor, lower-middle-class — to converge in this strange moment, as affluent shapers of culture. But an arc on that circle has marred the whole. And I don’t think that it’s overdoing it to identify that blemish as a tragic drama.

Back in his seat, Smith waited, as per custom, for his category, best actor. The producers apparently didn’t ask him to leave. His name was called. As per custom, he took the stage and delivered a speech that has been inspected for the contrition expressed (to everyone but Rock) and identifications forged. He used it to explain that playing Richard Williams, the father of Venus and Serena Williams, had awakened in him an understanding of himself as a protector and defender — of women, of Black women. A couple of weeks earlier, he’d watched Jane Campion insult the meaning of the Williams sisters’ importance and could do nothing. And last year, he reconvened the cast of his show, “The Fresh Prince of Bel-Air,” and wept over his failure to save the job of Janet Hubert, who spent three seasons playing Aunt Viv. At the Oscars, as he spoke through tears and clutched his Oscar, the Williamses, up in their seats, seemed like passengers on a roller coaster.

Since November, Smith’s memoir, “Will,” has been one of the most popular books in the country. Its psychological centerpiece involves his guilt over seeing his father badly beat his mother when he was 9. But its prevailing psychological metaphor is the brick wall he learns to build alongside his father, his Daddio. What seemed to break on Sunday night was a kind of cycle. He watched his wife wince and perhaps saw his mother. Snap. Trauma can’t exonerate Smith: The combined age of the three people involved in this triangle is 160. But maybe it can explain that, for a few rueful minutes, a wall had come down — or gone up. Smith might have left his body. He was no longer 53 but 9 again; and poor Chris Rock, he was Daddio.

In the altercation’s wake, Smith said he received some wisdom from Denzel Washington, his fellow best actor nominee and a Hollywood sage now, one who’s been giving him advice since the beginning of his acting career. As Smith recounted in his speech, Washington said, “At your highest moment, be careful. That’s when the devil comes for you.” A shallow piece of me assumed the devil to be Rock. But we all understand what Rock was doing that night: his job, not well with that hair joke, but he was working. The devil is deeper than that. When something breaks, he gets loose. He got loose at the Oscars.

Watching Smith up there on Sunday, burying his behavior in the Williamses’ story, I’m not sure he was entirely back in his body. I’ve never experienced a victory that feels this much like defeat. I suspect he knew this, too. He wondered whether he’d ever be invited back. That feels right. He wasn’t accepting an Oscar so much as trying to turn himself in.

WHEN SOMETHING BREAKS, it’s probably best not to use your hands to pick up the pieces. But there was Smith using a hand. What happened on Sunday will be one of those live events that we’ll now spend the rest of our lives baffled by, like Justin Timberlake exposing Janet Jackson’s breast at the end of the 2004 Super Bowl halftime show. It’s been 55 years since anybody cared this much about a Hollywood slap. But when Poitier launched his against a haughty white moneybags in “In the Heat of the Night,” it was against racism. Sunday’s incident involved someone experiencing a private episode that we should never have seen.

That’s one thing about the last two years. We’ve been made privy to all kinds of behavior we’d rather not see, witnesses of people’s worst moments. Now we’ve been made privy to one of Smith’s. Most of us don’t know any of these people. Yet we kind of do. We’ve made them part of some cultural family — that’s part of how stardom works (TV stardom, especially, which, early on, is what Smith, Pinkett Smith and Rock achieved). The reason so many of us are asking one another what just happened, the reason we’re so disturbed — a reason — is that maybe these three are like family, and it hurts to watch them feud. To witness intense emotional and psychological frailty (call it narcissism if you must) is to be left with as many questions about who we are as about who, Sunday night, Will Smith became. It’s like every other mystery of these past two years. We’ll never know. And with respect to him, why do we deserve to?