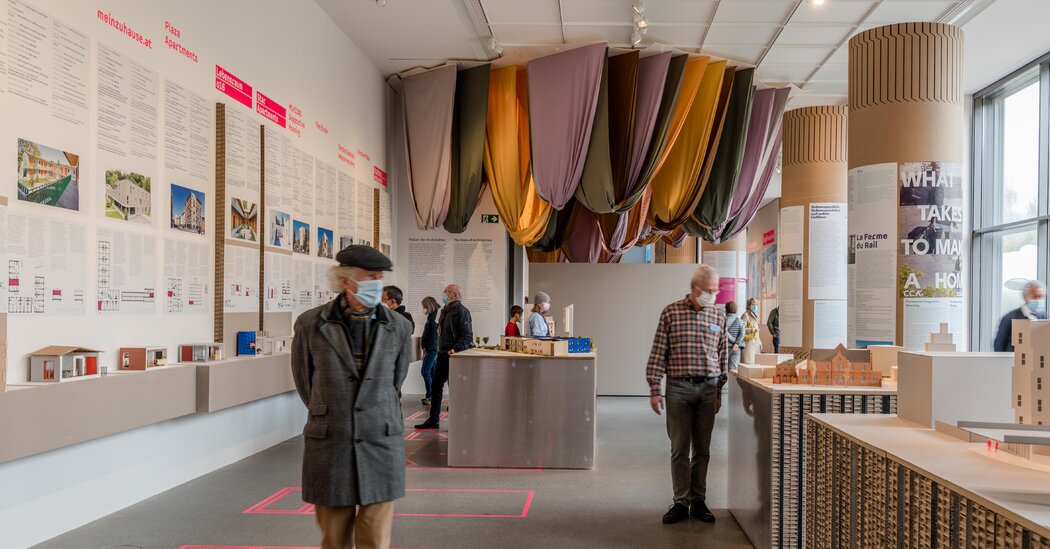 From afar, the Star Apartments housing complex in Los Angeles could easily be mistaken for luxury condos. Its striking silhouette hovers over the city’s Skid Row neighborhood like stacks of cantilevered Legos. But the building, designed by the renowned architect Michael Maltzan, is not for Hollywood executives or tech entrepreneurs: It is one of the world’s most ambitious attempts at housing the formerly homeless.

The $21-million construction contains 102 apartments, as well as a running track, library and on-site social services. Maltzan wanted the building’s powerful presence to send a message to passers-by who might like to ignore those living on the city’s streets. “The building makes it clear that those communities are present in the city,” he said in a recent video interview.

“I have found that the building creates a sense of pride for people who live there, because something was created with real intention, and a sense of spirit — and, I hope, beauty,” he said.

The building is one of 19 such projects highlighted in the exhibition “Who’s Next?” at the Architecture Museum of the Technical University of Munich, which the organizers say is the first major worldwide survey of contemporary architectural approaches to housing the homeless. A theme of the exhibition, which runs through Feb. 6, 2022, is that, along with economic and social measures, architecture can play a powerful role in addressing a worsening crisis.

Homelessness has surged in the United States and many parts of Europe in recent years. According to New York City’s Homeless Shelter Census, the number of people sleeping in the city’s shelters has more than doubled since 1990. The number of people living on the street in London increased by 18 percent between 2018 and 2019 alone: The city’s mayor, Sadiq Khan, has described this trend as a “national disgrace.” The problem has also grown in countries, like Germany, with comparatively generous social benefits.

Alongside architectural models and films about the issue, the exhibition includes a detailed overview of the problems driving homelessness in cities including Moscow, São Paulo and Tokyo. In many countries, the rise in unemployment resulting from the coronavirus pandemic has forced even more people into poverty and onto the streets, and the imposition of lockdowns forced many into increasingly precarious situations.

Many of the largest housing projects in the exhibition are in the United States, where the scale of the problem remains greater than in Europe. In Los Angeles, with a population of 4 million, 66,436 people experienced homelessness in 2020, according to the city’s official count. Munich officials believe the city of 1.5 million has approximately 9,000 people living in shelters.

In an interview, Daniel Talesnik, an architect and assistant professor at the Technical University of Munich, who curated the exhibition, said that homelessness “centralizes so many of the failures of our societies: the schooling, justice and housing systems.”

Architects, he added, have often fed the crisis by working on projects that have driven gentrification and pushed people out of their homes. “We are part of the problem, but we can also be part of the positive end of things.”

Talesnik emphasized that there is no one-size-fits-all approach to creating homeless accommodation, which can include everything from emergency shelters to long-term social housing, or buildings catering to specific populations, like alcoholics. Most projects require careful consideration of their residents’ needs for privacy — a rarity for those living on the street — and must include community spaces so people can form support networks.

In many cases, budgetary constraints require creative architectural solutions, including prefabricated modules, as in Star Apartments, or the use of donated materials to save costs.

The sole project from New York in the exhibition is The Brook, a social housing project in the Bronx designed by Alexander Gorlin Architects, which is based in the city. The building, commissioned by the Common Ground community organization, consists of 190 housing units for low-income residents, the formerly homeless and for people living with H.I.V. or mental illness.

“Design was often not seen as an important aspect of homeless housing,” Gorlin said in a phone interview. “They were faceless vanilla blocks that looked cheap and made people, by implication, feel that where they were living wasn’t important.”

The Brook, he noted, was specifically tailored for its residents, for example by including “breakout spaces” in hallways to encourage gatherings and build a sense of community. “I don’t think the architect should try to do what a psychologist or a social worker is better qualified to do,” he said. “The architecture provides a framework.”

Other highlighted projects in the exhibition included Lebensraum o16, a snake-shaped construction in Frankfurt built to replace one of Germany’s most notorious emergency shelters, where a 56-year-old resident was stabbed to death in 2012. The new building’s eye-catching, iridescent exterior has made it an unexpected architectural highlight in the city.

The show also features VinziRast-Mittendrin, a 2013 project in a former pram factory in Vienna that was the first attempt in Europe to create joint housing for students and the formerly homeless. The building, which includes a restaurant open to the public and a roof terrace, was designed by Alexander Hagner, Ulrike Schartner and their firm gaupenraub+/-, which has become known in Europe for its work for the formerly homeless.

The project emerged after students protesting university cuts occupied a Vienna auditorium in 2009. When they were joined by homeless people looking for a place to stay, the groups eventually got along well enough that students later called for the construction of a joint housing project. Some critics accused the project’s leaders of carrying out a high-risk experiment that could endanger students.

But VinziRast-Mittendrin — and its architecture — have now been widely acknowledged as a success. In a video interview, Hagner explained that his team had incorporated subtle design tweaks to improve the lives of residents. To help avoid potential conflicts, he said, he eschewed tight interior hallways that would force residents into close proximity; they also added multiple entries and exits to common spaces, so that residents could easily leave and de-escalate any disputes.

Hagner’s firm previously designed VinziDorf Wien, a grouping of prefabricated housing modules for housing chronically homeless alcoholic men that is currently being viewed as a model by several cities in the German-speaking world. He is also working on a project similar to VinziRast-Mittendrin located in the forest outside Vienna.

He explained that he had noticed growing interest among other architects in designing for the formerly homeless. “Because of climate change and pandemics and robotization, we will have more refugees in the future, more poverty,” he said. Young architects realized that “we have learned a profession in which we can perhaps not save the world.” But, he added, they could “contribute to making it a better place.”

World Health Organization (WHO) Chief Scientist Soumya Swaminathan attends a press conference organised by the Geneva Association of United Nations Correspondents (ACANU) amid the COVID-19 outbreak, caused by the novel…