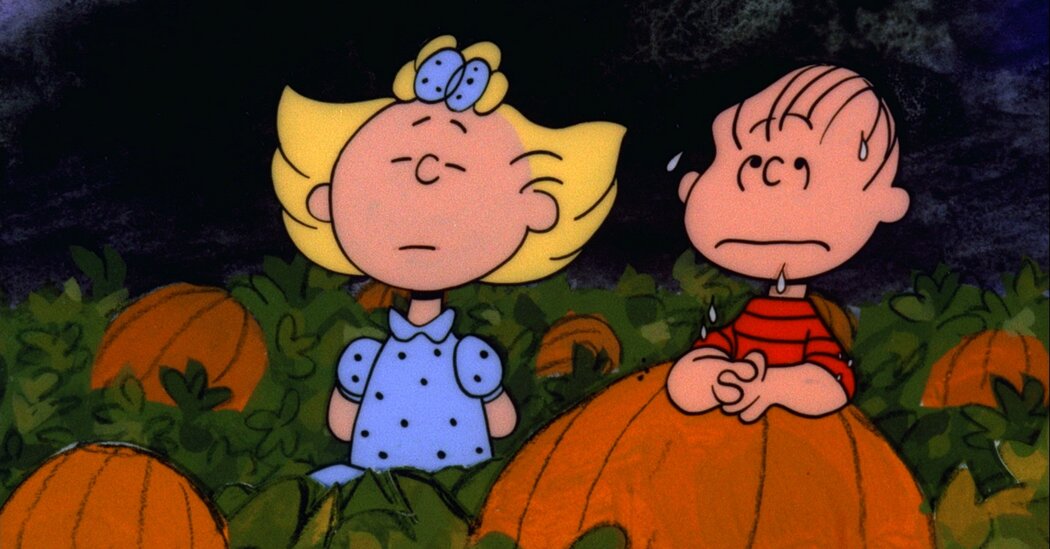 Recently, a friend told me she hated horror movies. Make that horror movie. Turns out she’d only seen one, and didn’t make it through: “The Texas Chainsaw Massacre.”

Renouncing horror after watching one of its most notoriously grisly films through trembling fingers is like watching “The Sopranos” and swearing off New Jersey. Take it from a horror movie fan: Being scared doesn’t have to be that scary.

In time for Halloween, here’s a selection of in-person experiences around New York City, as well as movies to view at home, to get the just right amount of fright, whether you’re a curious newbie or a seasoned aficionado.

For families with kids.

Through Oct. 31, the Metrograph Theater is offering digital streams of a 45-minute compilation of Halloween-themed cartoons from the collection of the archivist Tommy José Stathes, with live-action and animated shorts featuring Felix the Cat and Koko the Clown. (It’s recommended for ages 8 and up.) On Halloween, head to the Film Forum for an 11 a.m. screening of the original “Frankenstein” (1931).

On Saturday, costume contests for all ages are set at the Bronx Halloween Parade, where the entertainment lineup includes the Marching Cobras, a drum line; Mazarte, a Mexican dance company; and the comedian Sasha Merci, the parade’s host. The Halloween Kids Spooky Cruise (Oct. 23, 30 and 31) offers panoramic views of the Manhattan skyline and — you’ve been warned — unlimited Halloween-themed candies. BAMboo! at the Brooklyn Academy of Music (Oct. 31) is a free block party with goody bags that kids can grab from decorated car trunks.

For families with little ones, steer clear of the movie “Pumpkinhead” and go for the real thing. Pumpkin Point transforms Nolan Park on Governors Island into a family-friendly pumpkin patch; for a donation, you can take home a pumpkin of your own. Decker Farm on Staten Island offers pumpkin carving and a corn maze. Bring your own bag and load up on pumpkins or explore the Amazing Maize Maze at the Queens County Farm, which will host trick or treating with farm animals on Halloween.

Finish your day with “It’s the Great Pumpkin, Charlie Brown,” streaming on AppleTV+.

After being canceled last year because of the coronavirus, New York City’s Village Halloween Parade is back on Oct. 31. Now in its 48th year, the parade runs up Sixth Avenue from Spring Street to 16th Street, starting at 7 p.m. and finishing around 11 p.m. The grand marshal is the comedian and YouTube star Randy Rainbow. If you can’t participate in person, the parade will be telecast live on NY1 starting at 8 p.m.

“Universal Horror,” a new eight-film collection on the Criterion Channel, spotlights some of the legendary movie monsters, like Frankenstein and the Mummy, that originated at Universal Pictures in the 1930s. Highlights include the longer and racier Spanish-language version of the original “Dracula” (1931), and Boris Karloff and Bela Lugosi in the grisly, Poe-inspired revenge tale “The Raven” (1935).

Ghost stories, true crime — and interior design? That’s “Dark House,” a new podcast from House Beautiful magazine and the first podcast in Hearst’s 125-year history. The five-episode series is free, and explores the architectural elements of spooky houses around the country. One episode is about a house in the Hollywood Hills — where Jean Harlow and Sharon Tate’s boyfriend Jay Sebring once lived — that may be cursed.

The Brooklyn Brainery offers digital and in-person (and affordable!) classes for adults who want to learn about the scary side of history. Options include a “Murder at the Seaport” walking tour in Manhattan (Oct. 23 for $25) and a virtual class on witch hunts (Oct. 27 for $7).

As New York begins its post-pandemic life, we explore Covid’s lasting impact on the city.

For a scare that won’t keep you up at night.

The guided NYC Ghosts tour stops at said-to-be haunted locations across New York, including the Jefferson Market Library, which once served as a women’s prison, and a Revivalist Greek brownstone in the West Village that’s known as the House of Death, where the ghost of Mark Twain, who lived there for a year, allegedly roams.

For chilly nights, stay at home and read “Yours Cruelly, Elvira,” the dishy new memoir from Elvira (a.k.a. Cassandra Peterson), the longtime horror movie hostess and entrepreneur. In it, she details her rise from a Kansas childhood to Las Vegas showgirl to beloved horror personality. But she also spills the beans on her chance encounter with Elvis and her relationship with a woman. Stream the horror comedy “Elvira, Mistress of the Dark” (1998) on Amazon Prime.

The Alamo Drafthouse Lower Manhattan opened this month beneath the landmark 28 Liberty Street building in the Financial District. “Lights of New York,” a series of movies set in and about the city, will include the religious paranoia thriller “God Told Me To” (1976) and the gritty vampire film “The Addiction” (1995), for a week starting Oct. 29.

For horror fans on a budget, the new streaming service Kino Cult offers a free deep dive into cinematic weirdness. The collection includes bizarro films by the Oscar-winner Yorgos Lanthimos (“Dogtooth”) and the Italian master Mario Bava (“Black Sabbath”), as well as themed collections like ’70s and ’80s Flashback (“The Pit”) and Drive-In Favorites (“Beware! The Blob”).

“The Dark House” in the Hudson Valley, inspired by W.W. Jacobs’s ghost story “The Toll House,” is an immersive theatrical experience that takes place entirely in the dark. Written and directed by Timothy Haskell, the story is told through a headset you wear as you navigate the darkened space, where sounds, tastes and smells emerge around you. The show continues through Oct. 31 at the Philipstown Depot Theater in Garrison, N.Y.

Spectacle Theater, the offbeat Brooklyn microcinema, has reopened its doors, and its Halloween offerings are as delightfully bizarre as ever. On Halloween night the theater is showing “Cemetery of Terror” (1985), a Mexican film about teenagers who bring a serial killer back from the dead.

The creative team behind Blood Manor, the ultra-scary haunted house in Lower Manhattan (through Nov. 6), takes a culinary turn this year with Nightmare on Beech Street, a “haunted dining experience” in Long Beach on Long Island. Costumed actors will interact with diners, who will choose from a menu that includes Witches Hair Pasta, the Death Wish-key cocktail and the Brain Hemorrhage, a chocolate brain-shaped dessert. The venue is open until 2 a.m. through Oct. 31.