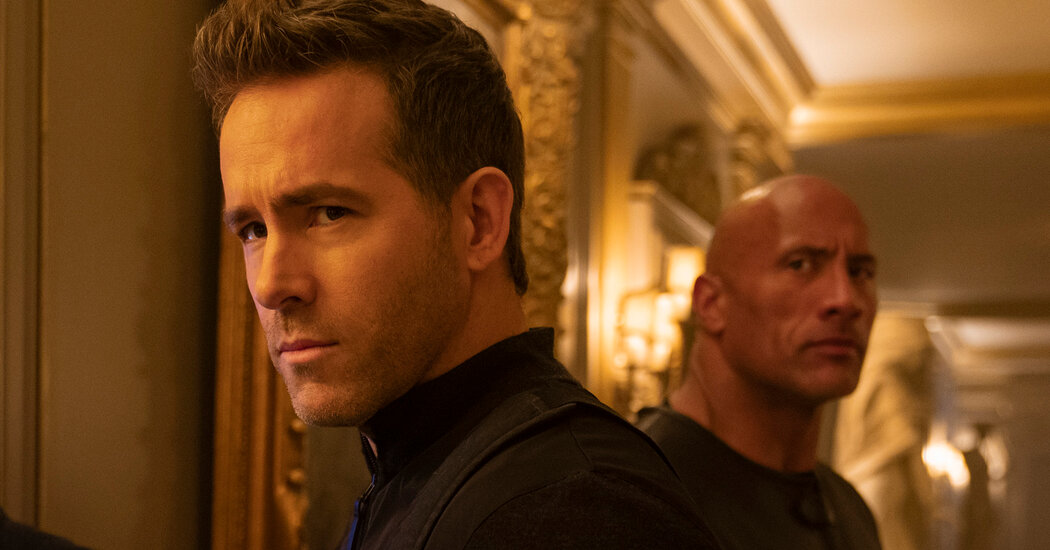 “Hi, I’m Rawson Marshall Thurber. I’m the writer/director of Red Notice.” “He knows what he’s doing.” “Red Notice opens with John Hartley, an FBI profiler played by Dwayne Johnson, arriving at the Castle Sant’Angelo Museum to try to stop Nolan Booth, played by Ryan Reynolds, from stealing a priceless egg. So John Hartley has come in, and he’s realized that this egg is probably not the real one. And he decides to prove it by grabbing a nearby soda and pouring it on top of the egg and watching as the egg melts in front of his eyes. And the moment he does, he spots Nolan Booth, Ryan Reynolds, take off. And that begins our chase. I wanted to start the movie off with a bang, and I thought a foot chase through the museum might be a fun way to do it. Because of some of the restrictions put on us from the pandemic, we couldn’t leave Atlanta. So we had to build the entire museum on a soundstage in Atlanta. We had an incredible production design team led by Andy Nicholson, Academy Award nominee. And he and his team built the entire museum inside. And if you watch the sequence, Ryan and Dwayne chase each other through hallways. And oftentimes what we would do is have them run through one hallway, and then overnight, we would change it over to look like a different hallway, and they’d run back the other way. And if you didn’t know it, you wouldn’t know it. It’s part of movie magic. So we kept reusing the sets over and over, rebuilding them, redressing them, and got ourselves a pretty cool foot chase to start things off. On top of which, we wanted to add some dynamic camera movement to the opening chase. So not only were we in a handheld mode, but we also added a piece of technology that is not used very often. We used a tiny little camera called a Komodo Cam, created by the Red Digital camera system. And it’s about the size of a tissue box, and we attached that camera to a race drone. And we chased Ryan and Dwayne through our sets as they ran hither and thither, and it got us some pretty great shots. As you’ll see, certainly when Ryan comes into the big scaffolding room and he goes running and jumps over the table, the camera that follows him and chases him all the way up onto the scaffolding is our Komodo Cam, our race drone operated by the world renowned Johnny FPV I wanted the chase to be fun. I wanted it to be fast. I wanted to show Ryan’s character, Nolan Booth, that he’s someone who out-thinks problems. He would rather trick you than try to punch you. And so what I liked about the scaffolding sequence is that Nolan Booth never throws a punch. Ryan never throws a punch. He’s bobbing and weaving, ducking and dodging and using his wits to outsmart the security guards trying to chase him. And to me, that’s much more fun than simply pulling out a gun and shooting at people. We had a great stunt team that started to design the actual sequence in terms of the pratfalls and the gags. At the end of the sequence, Ryan pulls a final pin, and the entire scaffolding collapses. What we had to do is, of course, shoot every single piece of it before we collapsed the scaffolding. And then overnight, our special effects team and rigging technicians set the scaffolding to blow and fall. And then you set up about eight or nine cameras, because you really only want to do this once. And then everybody gets safe, and on the count of three, they hit the button, and the whole thing collapses. And we got it in one take.”