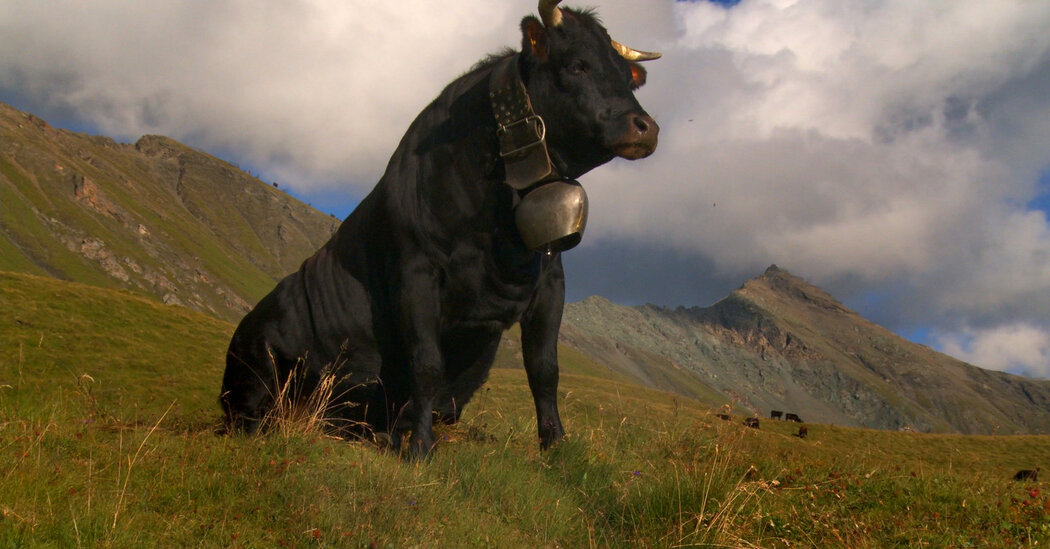 Few places are lovelier for cows to ruminate in than the Valais in southern Switzerland. This alpine region’s most famous attraction is the Matterhorn, but it is also where you find a breed of cattle known as Hérens. There, on lush, steep slopes, these brown-black animals graze and graze some more, at times using their horns to plow into the dirt and one another.

The title subject of the French documentary “Vedette” is a typically brawny specimen with a massive head and formidable bass-y moo. She looks so tough, so intimidating, though this may be fantasy; it is, after all, easy to imagine all sorts of nonsense about animals. That’s certainly one of the lessons of “Vedette,” which was directed by Claudine Bories and Patrice Chagnard, who are married, although it’s unclear if they entirely grasp their movie’s contradictory messages, its untapped complexities or its downright weirdness.

Over a leisurely, sometimes slack hour and a half, the filmmakers tell an initially inviting and benign story of one cow and the sparsely populated area in which two- and four-legged creatures exist side by side, seemingly much like generations have done before. With Bories serving as the narrator and interviewer, and Chagnard handling the cinematography, the directors introduce a world that looks almost untouched by modernity, despite technologies like cellphones and portable milking machines. A lot of this seems genuine and true, even if there’s also a tourist-board quality to the upbeat tone and some of the hovering camerawork.

Amid copious beauty shots of cows and land alike, the movie skitters from the personal to the lightly ethnographic and the quasi-sociological. One ritual that’s distinct to this region is cow fighting — “combats de reines” or “battle of queens” — bloodless, surprisingly watchable spectacles in which pairs of bovines push against each other’s heads. (Their horns have been dulled.) Each winner is then matched with another cow until a head-ramming champion is declared queen. She receives a little crown of flowers for her troubles; for their part, the proud owners earn bragging rights to owning a queen, a honor Vedette has long held.

It’s not clear why, when or how this ritual emerged, which is typical of Bories and Chagnard’s frustratingly incurious approach. There’s much you never learn here, including fundamentals about dairy farming. Cows need to have calves to produce milk, and at one point, you see Vedette during a difficult birth. The calf needs to be pulled out using an obstetric chain, and right after it’s born, it disappears; like most dairy calves, it was probably sent to another farm or to slaughter. The possibility that Vedette’s calves were turned into veal chops might be a bummer for some viewers, but it would provide a true picture of life for most dairy cows.

The movie loses its thread and interest midway through after Vedette loses a fight. As they do throughout, the owners speak about Vedette’s feelings — how it affects “her morale” — anthropomorphizing that Bories doesn’t question and repeatedly echoes. To spare Vedette’s ostensible shame, the owners move her alone to a barn next to the directors’ home, where Bories sings her a song and reads aloud passages from Descartes’s “Animals Are Machines.” I imagine the filmmakers thought this charming, though they’re also clearly fumbling toward some greater awareness about animals beyond the purely instrumental.

“Vedette” joins a recent roster of documentaries about the uses and abuses of farm animals (others include “Cow” and “Gunda”). It’s disappointing that Bories and Chagnard fail to add anything to this environmentally urgent topic beyond their own surprise that these animals are more than indistinguishable milk factories. Vedette is a nice cow; she deserves more consideration than she receives. This shallowness is especially disappointing given the shocker ending, which throws everything that’s come before into a new, mind-bending light. I’ll say no more other than, as history teaches us, some queens lose more than their crowns.

Vedette
Not rated. In French, with subtitles. Running time: 1 hour 39 minutes. In theaters.