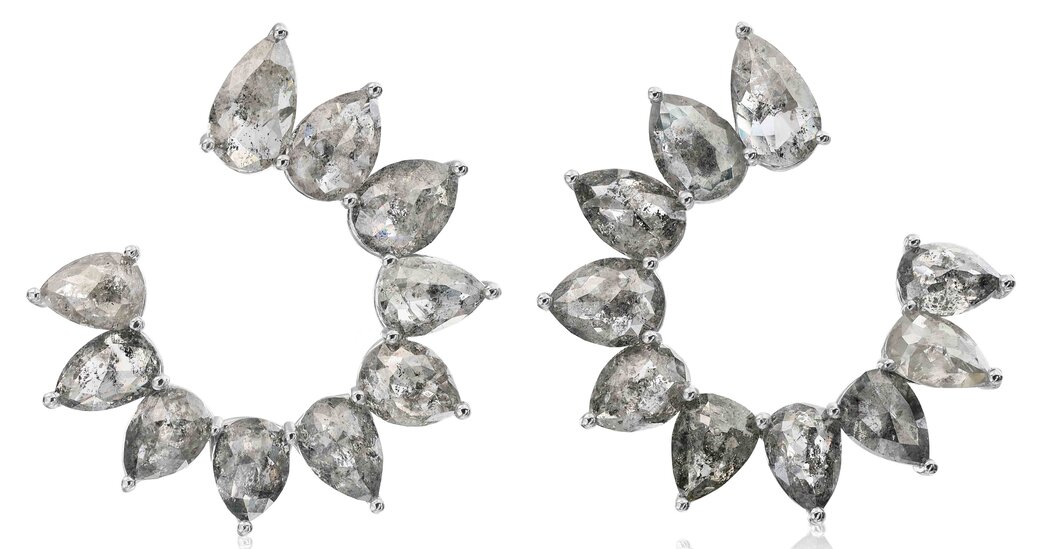 In the Munich atelier of the jewelry house Hemmerle, diamonds are meticulously sorted according to color into a series of little boxes. The labels read: Flaschengrün, or bottle green; Benzin, or gasoline; Camouflage; Dark Golden; Grau I, II and III, which are three variations of gray; and Schlamm, or muddy.

These names hardly conjure up the dazzling glow usually associated with diamonds, but the gems they identify — what traditionalists might call “ugly diamonds” — are increasingly being favored by both designers and buyers.

At Hemmerle, the gray, brown and green diamonds blend well with the metals, like bronze, copper and aluminum, that have come to dominate the house’s subdued color palette.

Christian Hemmerle, a member of the fourth generation to work in the family business, said that he grew up knowing about the colored diamonds that his father, Stefan, used. And he now follows in those footsteps, sometimes even disregarding the presence of inclusions, or flaws, when a stone is particularly appealing.

“Nobody is going to look at a diamond with a microscope, so as long as the inclusions are not disturbing to the eye,” he said. “If the color is a pleasant one, it is fine.”

That holds true for the sparkle, too. “Diamonds do not have to sparkle; they have to speak. If they do, then I know that I have something special,” said Mr. Hemmerle, who predominantly looks for gems in the vintage market for the added charm of an old cut.

For example, Sruti Swaminathan, a lawyer, wrote in an email that she commissioned an engagement ring featuring a salt-and-pepper diamond from the London-based jeweler Emma Clarkson Webb because of the stone’s beauty, asymmetry and what she called its “organic look.”

Certainly part of the appeal of “ugly” diamonds is the fashion trend for the offbeat, like the saturated lime at Bottega Veneta or Dior’s tangerine and white go-go boots.

But they also are considerably more affordable than their colorless counterparts or those in sought-after shades of red, pink and blue. For example, at Christie’s Magnificent Jewels sale on Nov. 9 in Geneva, a pear-shape brilliant-cut diamond of 7.60 carats that was VS1, or only very slightly included, sold for 39,474 Swiss francs, or $42,835, per carat.

That was several times more than an old mine brilliant-cut fancy deep brown-yellow diamond of 35.28 carats, with the same clarity rating, that sold for 10,630 Swiss francs, or $11,568, per carat.

And while Michela Gombacci-Minoli, founder of a vintage and auction concierge service called Otis On Park in New York, wouldn’t say how much she paid for a classic spiral ring set with gray diamonds, she said she bought it in the New York Diamond District because “it felt different, but still replete with the charm of diamonds and costing about 60 percent less than if it were set with white diamonds.”

Paul Zimnisky, a diamond analyst based in New York, said in an email that “a lot of consumers want a diamond ring that is unique and different from what everyone else has.” But, he added, suppliers also are always looking for ways “to drive demand for otherwise harder to move stones.”

By way of an example, Mr. Zimnisky mentioned in his email the successful marketing of “chocolate diamonds,” orchestrated by the jewelry house Le Vian.

Eddie LeVian, chief executive of his family company based in New York, recalled how his interest in brown diamonds began about 20 years ago during a meeting with executives at Rio Tinto, owner of the now-closed Argyle mine in Australia, renowned for its pink and red diamonds.

But other colors have their advocates, too. “I believe that green diamonds are undervalued,” said Nadine Ghosn, a London designer best known for her signature Hamburger ring. She was inspired to design a ring set with a 15-carat green diamond after clients tried to buy — while she was actually wearing them — two matching 2.85-carat Asscher-cut olive diamond earrings that she had made for herself after completing her M.B.A.

Gray and brown diamonds are the mainstays of the Nudo (nude) and Sabbia (sand) collections by Pomellato, while a crescendo of diamonds from clear through shades of gray to black distinguishes a pair of dramatic drop earrings by the London designer Glenn Spiro.

And salt-and-pepper stones have been featured by Nina Runsdorf, a New York jeweler, since she started her company in 2005 because they “add uniqueness, so much so that when a client walks in a room, they’re often asked about the stone.”

Twenty years ago in Mumbai, the Brazilian designer Ara Vartanian picked some large white diamonds with a cloudy fluorescence from a group of puzzled dealers who thought them worthless. Mr. Vartanian ended up using them in a seven-carat engagement ring for his now-wife because, he said, the stones were “much more interesting than the usual ‘perfect’ ones.”

Consumers’ attraction to the unusual and seemingly imperfect appears to be part of the reaction to a world in which classical beauty is easily achievable through surgery or social media filters, said Elisabetta Pollastri, co-founder of The Spotter Lab, a trend forecast agency in Paris. They have come to “value elements of differentiation in search for authenticity,” which has become synonymous with rarity, Ms. Pollastri said.

She added that “perhaps now that perfect diamonds can be easily produced in a lab, ‘imperfect’ diamonds from Mother Earth become more appealing.”

But Krishna Choudhary, a member of a family that for 10 generations has dealt with some of India’s most precious jewels, said jewelry there has long featured brown and yellow gems. For example, the Maharajah of Nawanagar had Cartier set an unusual 61.50-carat golden-brown diamond, known as the Tiger’s Eye, as a turban ornament in the 1930s.

And Mr. Choudhary himself set a brown diamond in a men’s ring for his Santi jewelry brand.

But, he added, clients have a “love-hate relationship with unconventional colors,” although he says he believes their interest grows after they become accustomed to the hues.

Christian Hemmerle was not surprised. “Colors of nature are always beautiful,” he said.