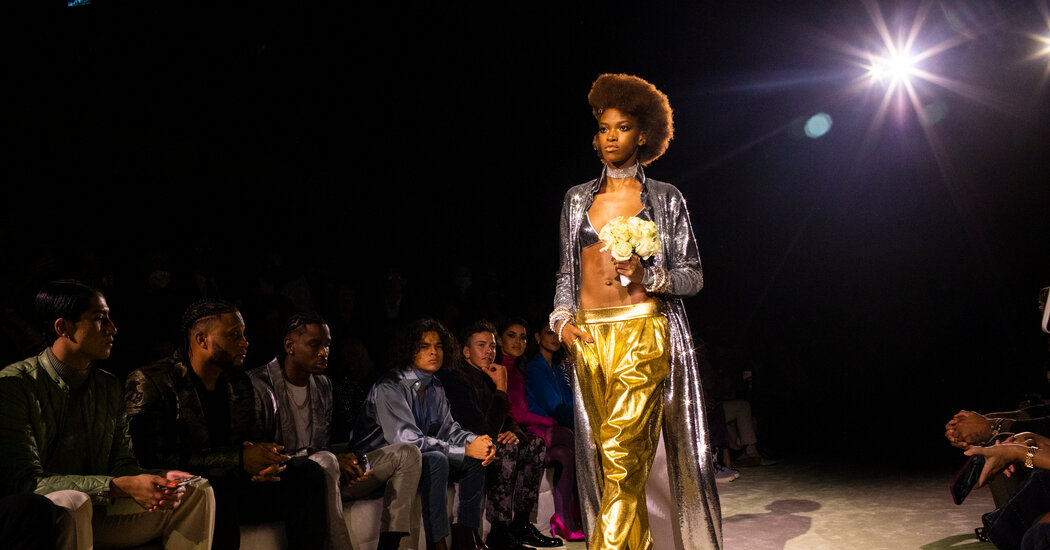 “New York Fashion Week: The Return” came to a wannabe happy ending like a Ryan Murphy mini-series: in a discorama shower of glitz and Technicolor, with very high production values and a star-studded cast that disguised a questionable story line, leaving open the option to renew.

In the soaring environs of Lincoln Center, on the mezzanine level of the David H. Koch Theater, Tom Ford — chairman of the Council of Fashion Designers of America, honorary co-chair of the Met Gala — held the last show of the American season, his runway lined by two rows of low white sofas with a mirror on one end, the better to bounce the bling that followed to every corner of the room. Out came Gigi Hadid in a lustrous oversize satin jacket atop a shiny emerald tank and gleaming turquoise track pants.

Mr. Ford had amped up the sparkle to full volume, in bedazzled loungewear cut with a dash of black leather, deep-pile velvet culotte suits and corsetry. There were tank tops spray-painted silver and denim-washed in gold. A finale “bride” wearing 24-karat sweats, a bikini top and a trailing silver trench. “Respect” blared on the soundtrack (Jennifer Hudson, coming off her role as Aretha Franklin in … well, “Respect,” was in the audience) followed by “Let the Sun Shine In.”

It was like the parody version of past career hits filtered through a working-from-home lens and then doused in Swarovski for the re-emergence. Mr. Ford acknowledged as much in his show notes, musing on moving to Los Angeles with its more casual ethos and the effects of social media, which, he said, have made everyone exaggeration-prone when it comes to appearance.

He’s not wrong. At the MTV Video Music Awards, held across the river in Brooklyn at the same time as Mr. Ford’s show, Lil Nas X practically leapt out of Instagram in his glittering violet Versace gown. But it’s also true that increasingly what’s most interesting in life, both on- and off-line, is not the heavily stage-managed imagery but the weird and the individual; the found object (or subject), as opposed to the forcibly received.

There’s a growing fault line opening up in New York fashion between the brands that made their names in a time at the end of the last century when the city was shaped by its Bonfire of the Vanities, and the brands that emerged thereafter.

Rawer and rougher and sometimes ridiculous, the newer names have expanded its boundaries in every sense of the word, dragging fashion week with them to other boroughs and underground venues; changing the definition of who gets to define dress; recalibrating what matters. They’re interested less in the hallowed halls of the Met or the linen-covered tables at Cipriani than inequity and the damage done; are accountable not to the Best-Dressed List but to the communities they attract.

(The irony is that this has made the Costume Institute very interested in them, and many are attending the Met Gala for the first time this year, as their clothes are part of the exhibition on American fashion scheduled to open this week.)

You could see it in the choice of venues, split between glamorous New York sites like the Empire State Building, Little Island, Tavern on the Green and the Rainbow Room and the industrial streets and warehouses of Bushwick and Gowanus.

You could see it in Telfar Clemens’s announcement that he was starting his own TV channel — TCTV, available via Apple TV and Roku — to sell his products and to showcase the work of artist friends and other like-minded individuals directly to his audience, rather than through the filter of a gallery or retail shop or Instagram.

And you could see it in the Vaquera show, held in Cortlandt Alley, behind Canal Street, with the sidewalks — there was no seating — lined by raucous fans (including ASAP Rocky). The designers Patric DiCaprio and Bryn Taubensee were, like Mr. Ford, plumbing the tension between the constraints of a pandemic and the desire to be seen out in the real world. But they leaned into the damage done rather than glossing over it: dumping a crumpled foil ruffle, like a remnant from an alternate Miss America pageant or an old bed skirt, over basic gray sweats; splashing the message “Go Away Evil” on a glittering black sweater; crafting billowing ball gowns out of what looked like trash bags.

There’s a middle ground, of course, as expressed in Tory Burch’s terrific homage to Claire McCardell, a.k.a., “the godmother of sportswear,” which cleverly subverted the classicism of the shirtdress and the concept of American ease via off-kilter color and fabric combinations, the proportions skewed to the side.

Ditto Joseph Altuzarra’s updating of his signature boho deluxe scarf and shibori dresses with crocheted breast plates like the most crafty handmade armor. And the padded satin hoodies and bubbled organzas of the Cate Holstein label Khaite, held in a dim basement dripping with overgrown greenery, like a lost world.

But for all the lip service paid this week to the belief that We Will Go Out Again! — and although the much-awaited first Met Gala since 2019, to be held the evening after fashion week ended, would seem to be a prior proof — it was hard not to feel there was some magical thinking going on; the fashion equivalent of “build it and they will come” (design it and they will wear).

Like shows held in outdoor venues that required cramming the audience into small stuffy elevators for access, it didn’t necessarily add up. And the clothes that seemed most relevant spoke not in a generic form of sunny-side-up glamour but in a primal assertion of difference. In the end, that may be the story line that is truly something to watch.