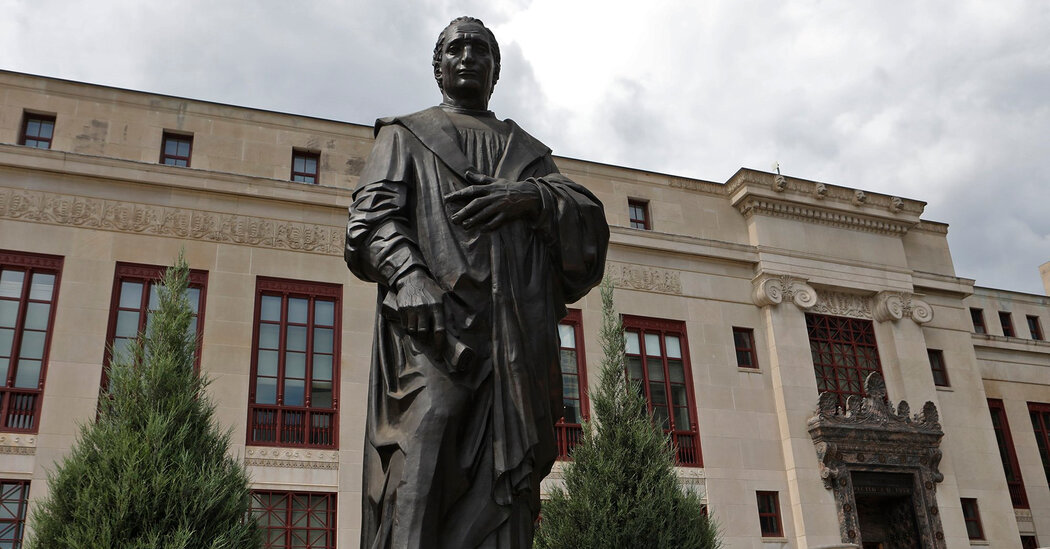 After a year when challenges to Confederate statues and calls for racial justice reached a new peak, the Andrew W. Mellon Foundation released a study on Wednesday that examined about 50,000 monuments to determine the demographics of what the foundation called “the nation’s commemorative landscape.”

The report says that of the 50 individuals represented most frequently by monuments in this country, 88 percent are white men, and half were slave owners. Only six percent of statues represent women, and 10 percent honor Black or Indigenous figures, according to the National Monument Audit, the product of a yearlong review that will help guide the foundation’s $250 million initiative to rethink who Americans honor, why and how.

Of those most represented, Abraham Lincoln, topped the list, followed by George Washington and Christopher Columbus. The Rev. Dr. Martin Luther King Jr. was fourth; St. Francis of Assisi, fifth; and Robert E. Lee was sixth. The first woman is Joan of Arc, in 18th place, and the first American woman is in 24th place: the abolitionist Harriet Tubman.

To produce the audit, Elizabeth Alexander, president of the Mellon Foundation, chose Monument Lab, a Philadelphia-based research studio that focuses on public art and has a strong philosophy of social justice. A 30-member team there found the monuments through publicly available data.

“Without this audit, we wouldn’t be able to do our work,” Alexander said. The goal of the initiative by Mellon, the largest humanities philanthropy in the nation, is to diversify the country’s monuments.

“We are trying to get people to look around and imagine themselves in the monuments,” Alexander said. The five-year Monuments Project, which will include adding new commemorative works and reconfiguring existing ones, is the most ambitious in the foundation’s history.

Paul Farber, director of Monument Lab, said, “We must see monuments as way stations that reflect our values.”

“This is a generational process,” he added.

Farber said that his organization will commission 10 teams of artists across the country to pursue projects that respond to the diversity gap. “We received applications from every state and territory, from tribal communities and cross-border collectives,” he said. The Monument Lab is using part of a $4 million Mellon Foundation grant on the commissions.

Some scholars who have reviewed the study are eager to start diving into the numbers, which were released along with it. “The benefit of having this information publicly available as a database is that activists and scholars can justify their arguments,” said Erin Thompson, an associate professor of art crime at John Jay College of Criminal Justice, who has a book coming out on the history of how monuments became cultural flashpoints.

“It’s not surprising that these monuments have distorted the past,” she added. “But the report shows there is no such easy fix.”

Another historian who reviewed Monument Lab’s study had questions about the approach to the research.

“The notion of an audit is a very technocratic idea. It assumes that there is a problem or crime to be ferreted out,” said Michele H. Bogart, an art historian at Stony Brook University in New York who has researched monuments for 40 years. “There is an assumption in the data crunch that assumes people in the past should have known that figures like Sacagawea or Sojourner Truth would be important in the future.”

Florie Hutchinson, a spokeswoman for Monument Lab, said there is a need for a database on public monuments that is more comprehensive than the currently available patchwork of government record keeping.

“A common misconception about monuments is that there is someone or some central government agency out there that tracks all of our monuments,” she said. “There is no trove of monument data waiting to be accessed and analyzed.” She said the lab’s research was driven by the idea that tapping existing information sources would help identify “overarching national patterns and themes.”