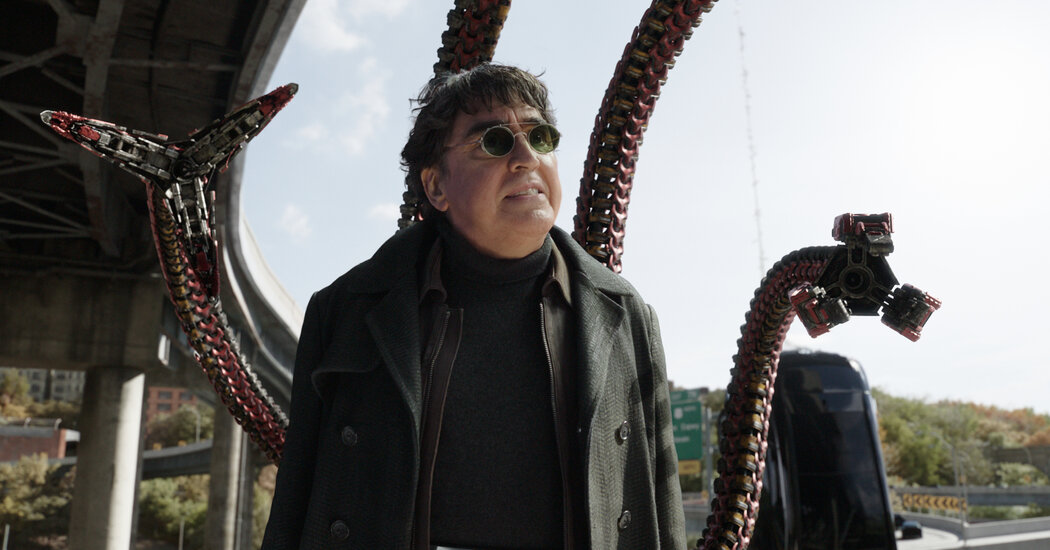 They were very good at being bad.

At the dawn of the “Spider-Man” film franchise in 2002, Willem Dafoe, the acclaimed actor of movies like “Shadow of the Vampire” and “The Last Temptation of Christ,” inaugurated the superhero series with a credible, formidable villain, Norman Osborn — otherwise known as the Green Goblin.

Another decade and another iteration of the franchise went by, and the mantle of eminent evildoer was passed to Jamie Foxx, an Academy Award winner for “Ray,” who played Max Dillon and his high-voltage alter ego, Electro, in “The Amazing Spider-Man 2.”

Each reset — not to mention the fact that some of the characters died in their films — seemed to preclude the possibility that these actors and the bad guys they played could ever meet up in a single film.

But that comic-book fantasy became cinematic reality in the current blockbuster “Spider-Man: No Way Home,” in which an errant spell cast by Doctor Strange brings Osborn, Octavius and Dillon into a dimension where Tom Holland wears the Spidey suit. (Oh yeah, the movie also unites Holland and his “Spider-Man” predecessors, Tobey Maguire and Andrew Garfield — blah, blah, blah.)

For Dafoe, Molina and Foxx, “No Way Home” allowed them to share (or steal) trade secrets. The movie also gave their bad guys the opportunity to try out being good guys: as Molina explained, “All the villains got a chance to not just redeem ourselves but find a deeper, more nuanced level to fill out our characters and make them richer.”

In individual interviews, the actors talked about being recruited to the “Spider-Man” franchise, returning for “No Way Home,” and the process and pleasures of doing their dirty deeds. These are edited excerpts from those conversations.

What do you remember about first being offered your role in the “Spider-Man” series? What was different about superhero movies at the time?

WILLEM DAFOE They offered the Goblin/Norman Osborn part to many people before they arrived at me. I was shooting a film in Spain [“The Reckoning”], and they sent the casting director to Spain and we shot a little audition in my hotel room. It wasn’t business as usual. But it was something I was very interested in doing, and I had a good feeling for Sam Raimi [who directed the original “Spider-Man” movies]. Of course, some people, at that point, thought it was very strange to make a film out of a comic. But I saw there could be a great pleasure and a great adventure in it, so I pursued it.

ALFRED MOLINA These movies have become very specific and almost forensic in the way they’re made. They have to appeal to all kinds of quadrants. On Sam Raimi’s film, I found the best way to handle the enormity of the event was to remember that as an actor, you’re a small cog in a much, much larger machine. You don’t spend a great deal of time exploring character or motivations, particularly if you’re playing a villain. But for me, that’s part of the joy of it — of turning a moment into, hopefully, a fun piece of storytelling.

The popular franchise of superhero films and television series continues to expand.

JAMIE FOXX All I can tell you is that my kids finally thought I was cool. “OK, we get all that other stuff you’ve been doing. But what? You’re going to go where? Are you kidding me?” They just loved Andrew Garfield. I was so jazzed to be able to be a kid myself. Watching the “Spider-Man” television show, back in the day, when his web was like a shoestring or whatever, and then to be part of this huge, huge world, it was just mind-blowing.

After your movies, did you ever feel pangs of disappointment to see the “Spider-Man” franchise continue without you?

DAFOE Even in the second and third installments [of the Raimi films], having me do little cameos, it was a pleasure to just see everyone again and stick my toe in the pool. But I didn’t have the imagination of continuing on.

MOLINA I just walked away from my movie thinking, well, that was fun. I really had a great time. But I never thought, oh God, I wish they’d bring him back. I never had any kind of hankering to do it again. When your character dies, you go, that’s it.

FOXX You can never look at it that way. If you look at the disappointments of what could have been, you can never do this business.

How were you approached about “No Way Home,” and how much did you know about the other actors who were participating in it?

DAFOE When Amy Pascal [a “Spider-Man” producer] and Jon Watts [the director of “No Way Home”] called me up and said we’d like to pitch you this idea, I thought, this is crazy. But let’s see what they have to say. I really didn’t want to do a cameo. I wanted to make sure there was something substantial enough to do that wasn’t just a tip of the hat. And the other thing was, I said I really want there to be action — I want to take part in action scenes. Because that’s really fun for me. It’s the only way to root the character. Otherwise it just becomes a series of memes.

MOLINA When I got asked to come in for a meeting with Amy and Jon, I actually thought it was for a completely different project, maybe to play another villain, or maybe an interview for some retrospective documentary. As the years had gone by, I thought, they may well bring Doc Ock back. But I never thought they’d bring him back with me. I was witness to my body changing, things moving. I walked in completely innocent. Like everyone else, I didn’t know the full extent of where the film was going. I didn’t get to read a whole script — I just saw the pages pertinent to me.

FOXX They were able to keep the mystique alive in a world where mystique doesn’t exist, anywhere. There’s Instagram posts and it’s about how many likes you get. Imagine if Picasso was screenshotting everything, everybody could see it, like, “Eh, I don’t want to buy that painting.” They kept everything under wraps and we all bought into something.

Did anything change about how you played your characters in the new film?

DAFOE I must be honest, I am aware that there was some criticism of that [Green Goblin] mask in the original one. We heard it enough that it was probably a consideration, to change it up a little bit. I don’t think about that because I don’t think about emoting with my face. My face follows my heart. It’s just an expression of what you’re feeling.

MOLINA In my original film, the tentacles — I almost said my tentacles — they were mechanical. They were played by puppeteers who gave them personality. We were like a gang — I dubbed us the Octourage. But this time around, the technology is so much more advanced that the tentacles were computer-generated and I was on my own. That was a whole other way of looking at it.

FOXX There was a character I played in “Baby Driver,” his name was Bats. He got killed off, but this was an opportunity to let Bats a little bit in on Electro. He wasn’t like, I want to [expletive] everybody up — I just want to get mine. Everybody flying through the air, looking good, got girlfriends. That now becomes the mantra of Electro.

Had you previously met the actors who play your fellow villains? What was it like encountering them on “No Way Home”?

DAFOE [Alfred and I] started at about the same time, so I was aware of his work and I’d see him through the years, so it was fun to see him and hear his stories. He’s got a million of them. And it was really fun to work with Jamie, because I’ve loved him ever since “In Living Color.” He’s a supremely sweet and energetic guy.

MOLINA Willem and I met each other briefly on the set of Sam’s movie. They brought me to watch Willem doing a scene as Doc Ock, just a little practical joke, which was delightful. For me, Green Goblin is the absolute zenith of supervillains, and he plays him with such relish. For my money, he’s the top man.

FOXX Alfred is the funniest guy on the planet. But then, the first time I saw Willem, I said, I’ve got to bow seven times, bro. He said, [bashful Willem Dafoe voice] “Ah, Jamie, you’re so nice, thank you so much, Jamie.” I said, no, bro, you’re going to get these seven bows. I would just watch these guys work and even small things that they would do, I’d say, ooh, I’mma steal that.

Your characters in “No Way Home” each have ample opportunity to be very bad and the chance to turn good. Which side do you prefer?

DAFOE Whenever you play a role, it is you and it isn’t you. If you’re going to play one of these archvillains, it’s the most natural thing in the world to cultivate the opposite of what they lead with. You develop a vulnerability and an insecurity against the confidence of the aggression. We all have that little devil on one shoulder and that little angel on the other shoulder. I remember as a kid seeing cartoons with that image. God knows it stayed with me.

MOLINA They’re two very different things, but in a way they belong to each other. Whatever element in Doc Ock that is villainous is made more villainous in the minds of the audience because of their knowledge of his goodness. And at the same time, his return to decency is even more poignant because of what we know he’s capable of doing and has done.

FOXX Oh, it’s always great to be bad, bro. What makes the superheroes super is how bad the villains can be.

If any of the characters you’ve previously played could appear in the same movie, who would you want to see team up?

DAFOE Once you finish something, you’ve got to make room for the next thing. So I don’t have much of an imagination for that kind of thing. Maybe I’m a little simpler. One at a time, one at a time.

MOLINA Just off the top of my head, I think it might be cool if Doc Ock met up with Diego Rivera [from “Frida”] and lent him the tentacles so he could finish off all those glorious murals. He could get so much work done. He could be working on four or five canvases at the same time.

FOXX Oh, man, Django [from “Django Unchained”], Willie Beamen [from “Any Given Sunday”] and Electro would be crazy. If they could share, they’d be like, yo, I need a little bit of that electricity over here.