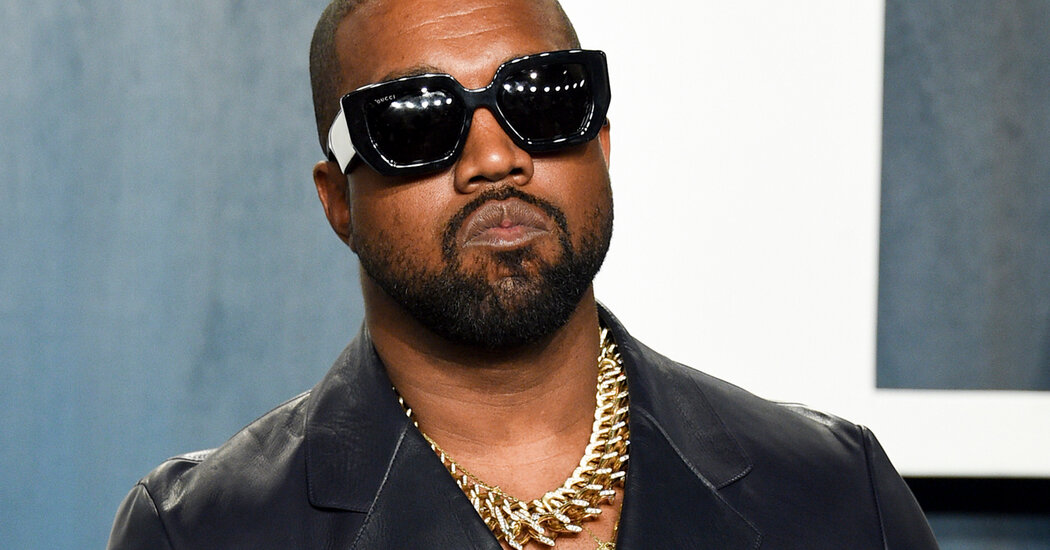 The intermarriage of fashion and music, streetwear and luxury, mass and elite, is about to reach its final frontier. The much rumored collaboration between the power mononyms, cultural influencers and BFFs Ye (formerly known as Kanye West) and Demna (formerly known as Demna Gvasalia, the creative director of Balenciaga) has come to fruition with the announcement on Jan. 7 of a new joint project: “Yeezy Gap engineered by Balenciaga.”

What exactly that means in specific is not yet clear. The news release described it as “a new creative exploration” and said it would continue “Ye’s commitment” to “delivering his vision of utilitarian design for all.” The only piece of design that has been revealed is a slightly torqued version of the Yeezy Gap logo featuring the trademark YZY on a black rectangle, though this time the corners have been rounded down and the whole thing is oozing slightly off-center. A spokeswoman for Gap said the first examples of whatever it is would be unveiled in June.

It could be clothes! It could be something completely different! Who knows.

What the project means in general, though, is simpler to parse: a collective meltdown among hypebeasts and haute couturiers alike and good things for Gap, which is once again all over the news even before any actual products have been revealed. (Ye may not have made a lot of stuff in year one and a half of his 10-year deal with Gap, but he has made a lot of marketing noise, which may be worth the investment.)

Both Ye and Demna have been geniuses at creating and cultivating their own notions of community, breaking down old silos and stereotypes, and what they represent together will be more than the sum of their parts. The potential variety of who will buy into their world is enormous, and if the cost of citizenship is a T-shirt or a carrier bag, well … expect it to sell out. The actual object is almost beside the point. What matters is what it represents in terms of a value system as espoused by the creators, and their ability to crystallize a moment in social evolution. Each object is a potential artifact.

Precedent has already been set by the two pieces Ye has produced for Gap thus far — a puffer that looks like a cross between a giant pillow and a garbage bag, and a hoodie that looks like, well, a pretty generic hoodie — and by their earlier collaboration on Ye’s arena-size “Donda” listening events in Atlanta and Chicago, which Demna directed (using up his vacation to do it, he told me last year). Each created outsize buzz and attracted the sort of attention that, if taken out of context or looked at objectively, may seem almost inexplicable.

As one might expect of the mind meld of the designer who grew up in Georgia in the former Soviet Union, immigrated with his family to Europe and ended up at the top of one of the most storied French heritage houses and the rapper from Chicago who briefly ran for president. But they are clearly fangirls about each other’s work. (Another rumor had it that Ye had bought out pretty much an entire shop’s worth of Balenciaga stock last year, and his estranged wife Kim Kardashian now wears almost exclusively Balenciaga.)

Also, both have a vested creative interest in elevating the everyday, though Demna’s focus is in reinventing basics with the most extreme high-fashion techniques and Ye’s is pushing high-fashion ideas into mass-market shape. Both are increasingly interested in scale and spectacle. And both have a willingness to question pretty much every kind of received convention that binds them together in artistic harmony. Or so Demna told me when I spoke to him late last year.

The two men have known each other for six or seven years but, Demna said, have “had a very intense creative exchange for about two years,” generally over text and WhatsApp.

To be specific, Demna said: “With Ye, I have something that I don’t really have with other people I know, where anything is possible. The sky’s the limit. He’s so out of the box. Whatever we know is uninteresting. What’s the next thing? He always thinks and talks about the future, and it’s very motivating. It’s like, ‘Hey, what about buttons? Do you like buttons?’ We spent like 2.5 hours talking about buttons. He’s the only person I know that actually goes that far in questioning things.

“Packaging. Why do we need packaging? Why can’t we just roll up a T-shirt and send that? Why the logo on the chest? Because you have buttons! So take off the buttons and have the branding in the middle of the garment.

“For me, talking with him is like going back in time to the 8-year-old me who doesn’t have all these barriers and filters. And those kinds of conversations help me to evolve as a designer because I think: ‘Yeah, why? Why do we do it like this? I never thought about that before.’ It makes me a better designer. Sometimes it brings me nowhere, but sometimes it triggers a thought that makes me change my way of designing. I think it’s the same with him — he feels he needs to share things with me and see what I think.

“We don’t have any ego issues, either. Very often for two creatives to have this exchange, ego can be a problem. We don’t have that.”

Demna also said that the experience of creating the sets for “Donda” was thrilling for him — as thrilling as fashion design — and had opened up new creative possibilities. “The other night I woke up, and I had all these ideas I had to write down on the phone about set design,” he said. “I woke up at five and couldn’t sleep after. I would love to realize them.”

So maybe the “Yeezy Gap engineered by Balenciaga” project will have something to do with that. Maybe Demna will set-design every Gap store. Maybe it’ll be a game. Maybe it will be a carrier bag. Whatever it is, though, and even if it feels like it’s pulling our leg, they’ll probably have a lot of fun doing it. And it’ll be something to think about, not just to see.