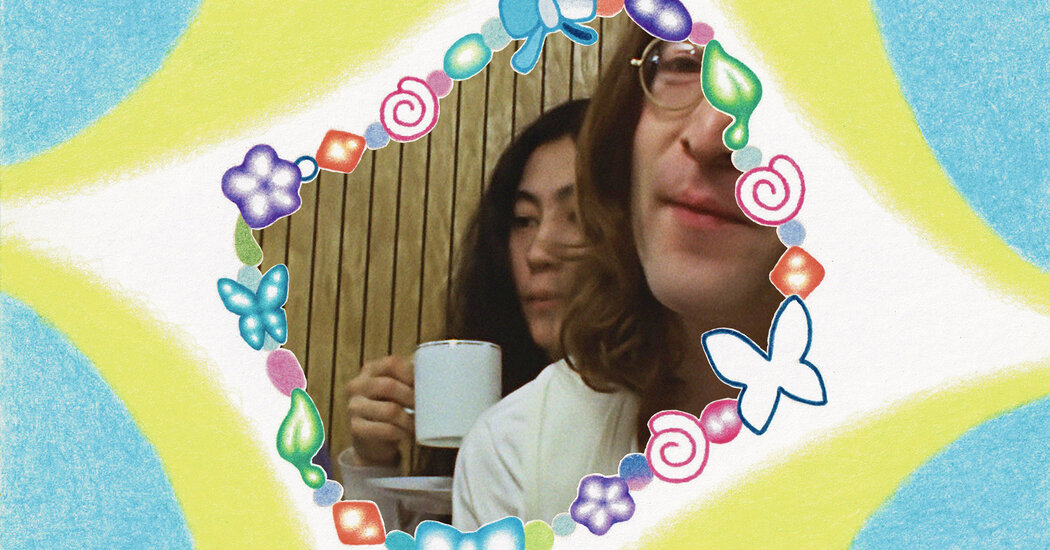 To hear more audio stories from publications like The New York Times, download Audm for iPhone or Android.

Early in “The Beatles: Get Back,” Peter Jackson’s nearly eight-hour documentary about the making of the album “Let It Be,” the band forms a tight circle in the corner of a movie soundstage. Inexplicably, Yoko Ono is there. She perches in reach of John Lennon, her bemused face oriented toward him like a plant growing to the light. When Paul McCartney starts to play “I’ve Got a Feeling,” Ono is there, stitching a furry object in her lap. When the band starts into “Don’t Let Me Down,” Ono is there, reading a newspaper. Lennon slips behind the piano and Ono is there, her head hovering above his shoulder. Later, when the group squeezes into a recording booth, Ono is there, wedged between Lennon and Ringo Starr, wordlessly unwrapping a piece of chewing gum and working it between Lennon’s fingers. When George Harrison walks off, briefly quitting the band, there is Ono, wailing inchoately into his microphone.

At first I found Ono’s omnipresence in the documentary bizarre, even unnerving. The vast set only emphasizes the ludicrousness of her proximity. Why is she there? I pleaded with my television set. But as the hours passed, and Ono remained — painting at an easel, chewing a pastry, paging through a Lennon fan magazine — I found myself impressed by her stamina, then entranced by the provocation of her existence and ultimately dazzled by her performance. My attention kept drifting toward her corner of the frame. I was seeing intimate, long-lost footage of the world’s most famous band preparing for its final performance, and I couldn’t stop watching Yoko Ono sitting around, doing nothing.

“The Beatles: Get Back” is being read by some as an exculpatory document — proof that Ono was not responsible for destroying the Beatles. “She never has opinions about the stuff they’re doing,” Jackson, who crafted the series out of more than 60 hours of footage, told “60 Minutes.” “She’s a very benign presence and she doesn’t interfere in the slightest.” Ono, also a producer on the series, tweeted an article without comment that claims she is merely performing “mundane tasks” as the band gets to work. In the series, McCartney himself — from the vantage of January 1969, more than a year before the band’s public dissolution — pokes fun at the idea that the Beatles would end “because Yoko sat on an amp.”

Her presence has been described as gentle, quiet and unimposing. Indeed, she is not the set’s most meddlesome interloper: That is Michael Lindsay-Hogg, the hapless director of the original documentary “Let It Be,” who keeps urging the band to stage a concert in an ancient amphitheater in Libya or perhaps at a hospital for children suffering from reassuringly minor ailments.

And yet there is something depressing about the recasting of Ono as a quiet, inconspicuous lump of a person. Of course her appearance in the studio is obtrusive. The fact that she is not there to directly influence the band’s recordings only makes her behavior more ridiculous. To deny this is to sap her of her power.

What to Know About ‘The Beatles: Get Back’

Peter Jackson’s seven-plus hour documentary series, which explores the most contested period in the band’s history, is available on Disney Plus.

From the beginning, Ono’s presence feels intentional. Her gauzy black outfit and flowing, center-parted hair lend her a tent-like appearance; it is as if she is setting up camp, carving out space in the band’s environment. A “mundane” task becomes peculiar when you choose to perform it in front of Paul McCartney’s face as he tries to write “Let It Be.” When you repeat this for 21 days, it becomes astonishing. The documentary’s shaggy run-time reveals Ono’s provocation in all its intensity. It’s as if she is staging a marathon performance piece, and in a way, she is.

Jackson has called his series “a documentary about a documentary,” and we are constantly reminded that we are watching the band produce its image for the camera. Ono was, of course, already an accomplished performance artist when she encountered Lennon, seven years her junior, at a gallery show in 1966. She was a pioneer of participatory artwork, a collaborator of experimental musicians like John Cage and a master at coyly appearing in spaces where she was not supposed to belong. In 1971, she would stage an imaginary exhibition of ephemeral works at the Museum of Modern Art in New York. In the catalog, she is photographed in front of the museum holding a sign that says “F,” recasting it as the “Museum of Modern [F]art.”

The idea that Ono doomed the band was always a canard that smacked of misogyny and racism. She was cast as the groupie from hell, a sexually domineering “dragon lady” and a witch who hypnotized Lennon into spurning the lads for some woman. (In 1970, Esquire published an article titled “John Rennon’s Excrusive Gloupie” that promised to reveal “the Yoko nobody Onos,” featuring an illustration of Ono looming over Lennon, who is rendered as a cockroach on her leash.) These slurs would spiral into an indefatigable pop-culture meme that has haunted generations of women accused of intruding on male genius.

Ono did not “break up the Beatles.” (If Lennon’s distancing from the band was influenced by his desire to explore other pursuits, including his personal and creative relationship with Ono, that was his call.) But she did intrude. In the documentary, McCartney politely complains that his songwriting with Lennon is disrupted by Ono’s omnipresence. For her part, she was vigilant about escaping the typical role of the artist’s wife. In a 1997 interview, she commented on the status of women in rock in the 1960s: “My first impression was that they were all wives, kind of sitting in the next room while the guys were talking,” she said. “I was afraid of being something like that.” Later, she would dedicate her barbed 1973 song, “Potbelly Rocker,” to the “wives of rockers who are nameless.”

In her 1964 text project “Grapefruit,” a kind of recipe book for staging art experiences, she instructs her audience “not to look at Rock Hudson but only Doris Day,” and in “The Beatles: Get Back,” she skillfully redirects the eye away from the band and toward herself. Her image stands in contrast to that of other Beatles partners — modelesque white women in chic outfits who occasionally swoop in with kisses, nod encouragingly and slip unobtrusively away. Linda Eastman, McCartney’s future wife, lingers a little longer, occasionally circulating and photographing the band. Eastman was a rock portraitist, and one of the film’s most fascinating moments shows her in deep conversation with Ono — as if to prove Ono’s point, it is a rare on-set interaction with no recovered audio.

Ono simply never leaves. She refuses to decamp to the sidelines, but she also resists acting out stereotypes; she appears as neither a doting naïf nor a needling busybody. Instead she seems engaged in a kind of passive resistance, defying all expectations of women who enter the realm of rock genius.

The Barenaked Ladies song “Be My Yoko Ono” compares Ono to a ball and chain (for the record, Ono said of the song, “I liked it”), but as the sessions go on, she assumes a weightless quality. She seems to orbit Lennon, eclipsing his bandmates and becoming a physical manifestation of his psychological distance from his old artistic center of gravity. Later, her performance would grow in intensity. The “Let It Be” sessions were followed by the recording of “Abbey Road,” and according to the studio’s engineer, when Ono was injured in a car accident, Lennon arranged for a bed to be delivered to the studio; Ono tucked herself in, commandeered a microphone and invited friends to visit her bedside. This is a lot of things: grotesquely codependent, terribly rude and iconic. The more Ono’s presence is challenged, the more her performance escalates.

All of this was used to crudely fashion Ono into a cultural villain, but it would also later establish her as a kind of folk hero. “It all comes down to YOKO ONO,” the drummer Tobi Vail wrote in a zine connected to her riot grrrl band Bikini Kill in 1991. “Part of what your boyfriend teaches you is that Yoko Ono broke up the Beatles,” she writes. That story “makes you into the opposite of his band.” It relegates women to the audience and ridicules them for attempting to make their own music. In Hole’s 1997 song “20 Years in the Dakota,” Courtney Love summons Ono’s powers against a new generation of whining fanboys, and says that riot grrrl is “forever in her debt.” Vail called Ono “the first punk rock girl singer ever.”

In Jackson’s film, you can see the seeds of this generational shift. One day, Eastman’s young daughter, Heather, a bob-haired munchkin, whirls aimlessly about the studio. Then she spies Ono singing. Heather observes her with scrunch-faced intensity, steps up to the microphone and wails.

In interviews, Berg and Carlebecker offered multiple theories to explain why Swedes produce such good K-pop tracks, including the country’s strong songwriting tradition and comprehensive music education system. Sweden is…