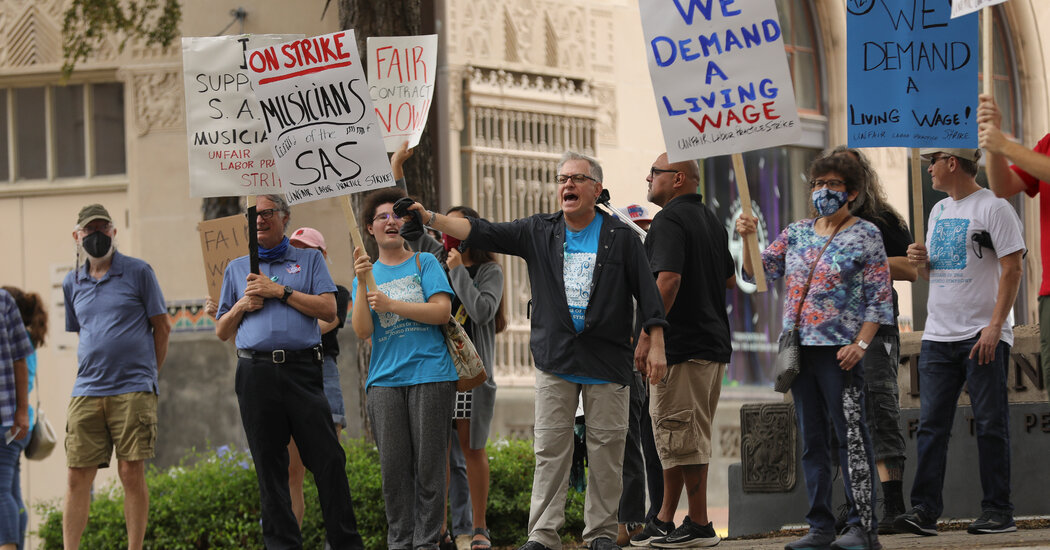 For months, the musicians of the San Antonio Symphony had eagerly awaited the chance to play before full audiences after the disruption of the pandemic, gearing up for favorites like Ravel’s “La Valse” and Handel’s “Messiah.”

Then came word of budget cuts. Saying the pandemic could exacerbate longstanding financial woes, the orchestra’s leaders in September proposed slashing the size of the full-time ensemble by more than 40 percent, to 42 positions from 72, shortening their season and reducing pay by almost a third.

The orchestra’s musicians resisted these moves, accusing administrators of mismanagement and greed and going on strike in late September. So far, a dozen concerts in the 2021-22 season have been canceled or postponed, management has cut off the health insurance of the striking players, and a compromise remains elusive.

“There’s a real risk this is going to end with no professional orchestra in San Antonio,” said Mary Ellen Goree, principal second violin of the orchestra, who has been involved in negotiations.

After more than a year without live performances before full audiences, many American orchestras have returned with much fanfare to their concert halls this fall to play for grateful audiences, eager to bounce back from the turmoil of the pandemic.

But for some ensembles, the economic disruption wrought by the pandemic has compounded long-term problems, including the decline of the old subscription model in which patrons bought season tickets each year, dwindling revenues at the box office, an increasing reliance on donations and turnovers in leadership. With labor disputes dragging on in some cities amid attempts to lower expenses, orchestras are grappling with fresh questions about their ability to survive the pandemic and beyond.

In Massachusetts, the Springfield Symphony Orchestra has been in labor negotiations with its players for more than a year.

The orchestra’s leaders, saying that they were drawing heavily from their endowment to cover operational losses even before the pandemic struck, have proposed a contract that significantly reduces the usual number of concerts. They say they need time to gauge audience enthusiasm for returning to hear live music during the pandemic.

“We need to test the waters before we make long-term commitments,” said John Anz, the orchestra’s interim executive director.

Turnover in the top ranks has complicated the negotiations. Anz plans to step down next week, after eight months in the job. He is Springfield’s fourth leader since 2012.

Springfield’s players have pushed for a promise to preserve engagements and jobs over a longer period of time. After the fall season was canceled, the musicians started hosting concerts on their own, soliciting donations to help cover costs.

“If we can’t get a commitment, we will leave,” said Alexander Svensen, who plays double bass and has been involved in the negotiations. “We’ll find other work because Springfield will just be too inconsistent.”

The disputes in San Antonio and Springfield come after a tumultuous period for many American orchestras, in which major ensembles from Philadelphia, Chicago, Atlanta, Baltimore, Minnesota and beyond have been rocked by labor battles, strikes and lockouts in the years since the Great Recession. They may also reflect the broader surge in labor activism during the pandemic, as employees have fought for better wages, working conditions and job protection.

“Workers across the spectrum are demanding more and feel like they have more power,” said Patricia Campos-Medina, a longtime labor activist who serves as executive director of Cornell University’s Worker Institute.

The pandemic has tested the relationship between cultural institutions and their workers. Several major ensembles, including the New York Philharmonic and the Boston Symphony Orchestra, have agreed to deep pay cuts to help their institutions weather the crisis, and many have managed to stay afloat by trimming administrative staffing and relying on federal grants and loans. But there have been a number of protracted labor disputes this year, including at smaller ensembles such as the Colorado Springs Philharmonic and the Fort Wayne Philharmonic in Indiana.

If the virus continues to pose a threat, and support from the government and donors wanes, orchestras could face more challenges over the next several years, and tensions between arts groups and unions could grow, labor experts said.

Softer ticket sales in many cities amid ongoing concerns about the Omicron variant of the coronavirus is adding to fears about the financial future of orchestras.

Orchestra leaders and labor activists alike worry that the ongoing gridlock in Texas and Massachusetts could hurt their efforts to woo back audiences.

“It’s always detrimental to the long term-health of an institution for that institution to go dormant for any period of time,” said Rochelle Skolnick, the director of the symphonic services division of the American Federation of Musicians, a union representing instrumentalists in the United States and Canada.

Skolnick said she believed managers in San Antonio and Springfield were “exploiting the pandemic” to push through reductions in pay and benefits that they had long pursued. Rather than seeking reductions, she said, orchestra leaders should redouble efforts to attract philanthropic support. But many orchestras have struggled to obtain the donations they need to keep their budgets balanced after a long period of rising costs.

In San Antonio, where the strike has stretched on for nearly three months, hopes for a quick resolution have faded. The musicians’ union and management each recently filed complaints with the National Labor Relations Board accusing the other of negotiating in bad faith.

Corey Cowart, the executive director of the orchestra, said that while cuts were painful, they were necessary to keep the organization alive. He defended the decision to halt health insurance coverage for striking musicians, saying they were not entitled to benefits because they were not working.

Cowart said there were limits to how much money could be raised from donors. He also noted the orchestra’s history of financial problems, including its filing for bankruptcy in 2003.

“We can’t even start to talk about artistic quality unless there’s financial viability,” Cowart said. “If we aren’t able to have a sustainable organization, the future of the orchestra is in question.”

In recent weeks, some players have found temporary work at nearby ensembles. Others have embraced activism, picketing outside the orchestra’s office with signs reading, “We demand a living wage!” and “How low can you go?”

Goree, the violinist, joined the orchestra in 1988. She said she was saddened to see it face yet another existential crisis. Many musicians, she said, suffered during the pandemic when concerts were canceled and paychecks disappeared. Now they fear for their livelihoods, she said, and worry that the future of the orchestra, which was founded in 1939, is in doubt.

“It’s very easy to destroy something,” Goree said. “Building it back up is much harder, if it can be done at all.”