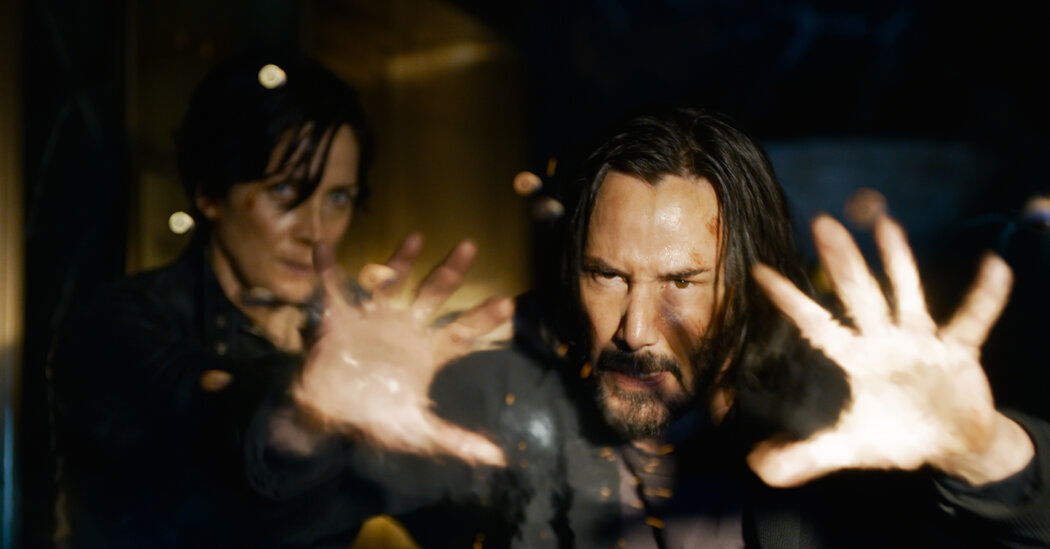 After she chases the White Rabbit down a very long tunnel, Alice enters a low, dim hall. There are doors up and down the passageway, but they’re all locked. As she walks through the hall, Alice wonders how she’s ever going to get out. You may find yourself asking much the same question while watching the fourth movie in “The Matrix” series, as it alternately amuses and frustrates you with its fantastical world.

The series first invoked Lewis Carroll’s elusive bunny in the first movie, the 1999 genre game changer that was jointly directed by the Wachowski siblings and soon set audiences’ heads on fire. “Follow the white rabbit” Neo, a.k.a. the One (Keanu Reeves, cinema’s ideal savior), reads on his desktop monitor, shortly before doing just that. The chase continued and at times seemed never-ending as it endured through two sequels, comics and video games. It also provided grist for reams of articles, dissertations and scholarly books (“The Matrix and Philosophy: Welcome to the Desert of the Real”), taking its place as one of contemporary pop culture’s supreme interpretive chew toys.

The series resumes in “The Matrix Resurrections,” which nudges the cycle forward even while it circles back to swallow its own tail. Once again, Reeves plays both Thomas Anderson and Neo, who exist in separate yet conjoined realms. Anderson’s world resembles our own (though airlessly art directed) but is a software program called the Matrix that’s run by artificially intelligent machines. Here, human avatars go about their business believing themselves free. In the series’ wittily perverse take on the circle of life, these machines keep human bodies — Anderson’s included — imprisoned in goo-filled vats, using the energy from these meat puppets to power the Matrix.

The Return of ‘The Matrix’

In “The Matrix Resurrections,” written and directed by Lana Wachowski, Keanu Reeves plunges down the rabbit hole again.

Directed solely by Lana Wachowski, “Resurrections” announces its intentions after the opening credits, with their streams of cascading green code. Somewhere in the illusory world, a woman with short hair fights unsmiling men in suits and shades, a setup that mirrors the banging preliminaries in the original film and makes you ache for Carrie-Anne Moss’s Trinity, Neo’s comrade in arms. Don’t worry, she’s onboard, too, just wait. Now, though, two others are also watching the action along with us, including a guy wearing a headset (Toby Onwumere) who analyzes the action like a sports commentator just before Bugs (Jessica Henwick) jumps into a very familiar fray.

What follows plays like a loving, narratively clotted tribute video to the “Matrix” cycle itself complete with innumerable bullets and almost as many flashbacks to the younger Neo. (You don’t need to revisit what happened earlier in the cycle, the movie does it for you.) Once again, Anderson is in dreamland writing code, this time for his role as a video game designer working on a project called Binary. Speaking of which: As before, he also has an apparent choice to remain ignorant about his existential condition or embrace its painful truth. He also meets a mysterious figure called both Agent Smith and Morpheus (Yahya Abdul-Mateen II, whose velvety, sepulchral voice adds shivers of danger).

There have been some significant cast changes since the third movie. Alas, missing in action are both Hugo Weaving and Laurence Fishburne, who added gravitas and much-needed wit. Instead, a silky Jonathan Groff now prowls around menacingly, his boyishness having been nicely weaponized for his role as a sly trickster. A less happy addition is Neil Patrick Harris, who delivers an unhelpful, one-dimensional performance as the Analyst. Still, not much here is different other than some of Reeves’s facial creases and salt-and-pepper hair. Characters still wear fetish clothing or nubby threads, and still keep fighting the fight as they brawl and yammer through the labyrinth.

Some of that yammering is amusing simply because “The Matrix” (and its successors) are exemplars of what’s been called mind-game movies, “a ‘certain tendency’ in contemporary cinema,” as the film theorist Thomas Elsaesser put it. Like others of this type, “The Matrix” plays with the perception of reality held by both the protagonist and the audience, poses questions about the limits of knowledge and addresses doubts about other minds and worlds. What makes mind-game movies especially fascinating — and helps explain their cultish appeal — is how they draw spectators into the game, partly by showing them worlds that they recognize. Or, as Morpheus put it once upon a time: “You’ve felt it your entire life, that there’s something wrong with the world.”

So, yes, “You have many questions,” as a character called the Architect tells Neo in “The Matrix Reloaded.” No kidding! That movie offered some persuasive, or at least tantalizing, answers: The world is an illusion, a simulation, an ideological prison, but it’s possible to escape with lots of guns and cool kids in black, that is until the sequel. The first movie offered viewers doors that they — unlike Alice — could open, allowing them to enter more rabbit holes. Once there, one of the more resonant readings, as the critic Andrea Long Chu has explained, is that “The Matrix” has been embraced by trans women as an allegory for gender transition. In this take, the world of illusions is the gender binary.

Whatever the limits of allegory, this interpretation is both intriguing and touching. (Lana’s sister Lilly Wachowski has said “that was the original intention.”) It adds emotional resonance to “Resurrection,” which gets a great deal of mileage from its — and our — nostalgic yearning, appreciatively stoked by Reeves and Moss’s reunion. The actors’ sincerity and effortlessly synced performances have always been this series’ greatest special effects, and watching them slip back into their old roles is a pleasure. The movie they’re in is still as beholden to the same old guns and poses as the earlier ones, the same dubious ideas about what constitutes coolness, the same box-office-friendly annihilating violence. But it’s still nice to dream of an escape with them.

The Matrix Resurrections
Rated R for extreme gun and other violence. Running time: 2 hours 28 minutes. In theaters and on HBO Max.