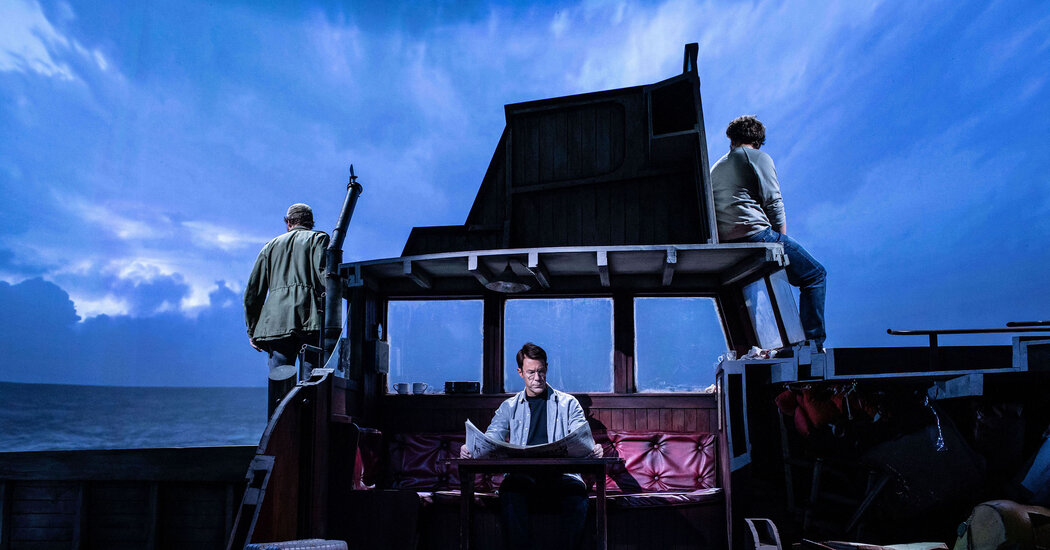 LONDON — When Ian Shaw was 5, he did something to make any movie fan jealous: He visited the set of “Jaws.” On location on Martha’s Vineyard, an assistant pulled back a huge sheet and young Shaw found himself staring into the gaping mouth of the man-eating shark that would soon become a cinematic icon.

“I was terrified!” Shaw, now 51, recalled in a recent interview.

Shaw was on set because his father, Robert Shaw, was starring in the movie as Quint, the psychotic shark hunter who, by the film’s end, has been bitten in two. Shaw said he visited many of his father’s sets, and the “Jaws” shoot seemed like any other. But what he didn’t know back then was that the shoot was one of movie history’s most notoriously dysfunctional, plagued by technical problems and cast feuds.

The production’s three mechanical sharks kept breaking down, and shooting was often delayed: Steven Spielberg, the film’s director, took to calling the special effects team the “special defects department.” At one point, a boat they were filming on sunk, sending two cameras down to the sea floor. (The film inside the cameras turned out to be safe.)

Shaw’s father — who died in 1978 — brought difficulties of his own to the production. He drank heavily during the shoot, and clashed with a co-star, Richard Dreyfuss. The elder Shaw repeatedly belittled and tried to humiliate Dreyfuss, making off-putting comments seconds before the cameras rolled, or goading Dreyfuss into performing silly stunts, like climbing a ship’s mast and jumping into the sea.

Roy Scheider, the movie’s other star, was stuck between the feuding pair.

The younger Shaw didn’t learn the full extent of the chaos on the set of “Jaws” until decades later, he said, but he realized that they had enough the drama for a play. Now he is winning rave reviews in Britain for “The Shark Is Broken,” a comedy three-hander running at the Ambassadors Theater in London’s West End through Jan. 15. In it, Shaw plays his father, stuck on a boat with Dreyfuss (Liam Murray Scott) and Scheider (Demetri Goritsas) as the tensions wax and wane.

In a recent interview, Shaw talked about the difficulty of portraying his father’s darker side onstage, and whether conflict can spur creativity. These are edited extracts of that conversation.

In the play, your father clearly dislikes “Jaws.” Did he ever take you to see the movie?

I saw it when I was very young, in a screening room somewhere, and was absolutely terrified and couldn’t go in the swimming pool afterward. I remember having nightmares, imagining sharks around my bed and calling for my dad to come and save me. Even though I knew that in the film he got eaten, I was able to suspend my disbelief about that.

What made you come up with the idea to turn the movie’s problems into this play?

I once had to grow a mustache for a part, and looked in the mirror and thought, “Oh, I look like Quint.” That’s what started it, but it seemed a very silly and foolish idea because I’d spent my whole career avoiding association with my dad.

Then I read Carl Gottlieb’s “The Jaws Log,” and watched documentaries, and saw there was this really interesting relationship between Robert and Richard and Roy — this triangle which makes for great drama. And you only need three people, so it’s affordable!

I toyed with the idea for years, because I felt it could be very embarrassing — potentially disrespectful to my dad and to the movie “Jaws,” which I love. To step into my dad’s shoes, and to paint him as an alcoholic — do I have the right to do that publicly?

Did you know he was an alcoholic at the time? He died only a few years after making “Jaws” when you were still young.

I did used to see him drink. I was often playing under the table in the Irish pubs when he would be having a session. But it didn’t seem a problem then. It actually seemed kind of normal.

I feel that generation, especially the more working-class actors like Richard Burton, had a little discomfort with the profession in terms of putting on tights and makeup. So their way of asserting their masculinity was to be hard drinkers, the sort of Viking method of proving themselves.

What made you get over your fear of disrespecting him?

When I started writing the play with Joseph Nixon, we quickly saw it wasn’t just about “Jaws.” Joe’s father died very sadly, and it became a little bit more about fathers and sons, about addiction, about making movies in general. There were these other themes that meant it wasn’t just a stunt.

You show your father continually antagonizing Dreyfuss, often seemingly just for fun. Why do you think he behaved like that?

He really didn’t want to do “Jaws,” because, at the time, he was offered [the remake of] “Brief Encounter,” or was certainly in the running for it. He would have rather have done that, to break away from this macho image. He kind of felt handcuffed to “Jaws” to provide for his family.

Then the shark’s not working, so they’re hanging around. And he liked to drink. But also Dreyfus genuinely did wind him up and so he thought he needed a bit of a slap down. He dared Dreyfuss to jump off the mast from the top of the ship, and I think he fired a fire hose in his face. There’s so many stories, and a lot of them are true.

In the play, your father says he’s needling Dreyfuss to improve the movie. Their characters are meant to dislike each other. Did you consider that he might just have been trying to create a mood?

Personally, I think it was both because he was annoyed with Richard, but also he did think it was getting some good work done between them. The acting is so good in the film, so it probably did help.

You once auditioned for a role in a production Dreyfuss was directing. How did that go given his past with your father?

He was directing “Hamlet,” and I went in and mentioned that I was Robert Shaw’s son and he looked, ironically, like Hamlet seeing his dead father. He just sat down and looked slightly ill. I was really taken aback at the time. I’d been expecting him to go, “Wonderful!” then give me a big hug. But he was very professional, because we obviously went through the audition.

Did you get the part?

Given that “Jaws” experienced so many problems, did you have any of your own making “The Shark Is Broken?”

Not that I remember. When I had the first ideas on paper, I did wake up with cold sweats at three o’clock in the morning thinking, “This is really bad idea,” because I was really worried that I would offend my family. But in terms of the writing process, I really enjoyed it.

Do you think “Jaws” would have been a better movie without the problems?

No, because the problems meant they all hung around and developed it. It allowed them to improvise. “You’re gonna need a bigger boat” was a piece of improvisation from Steven Spielberg. And the delays allowed my father to rewrite the Indianapolis speech, which is a big moment. All sorts of things in it were devised while they were hanging around waiting.

So disaster is a good recipe for creative success?