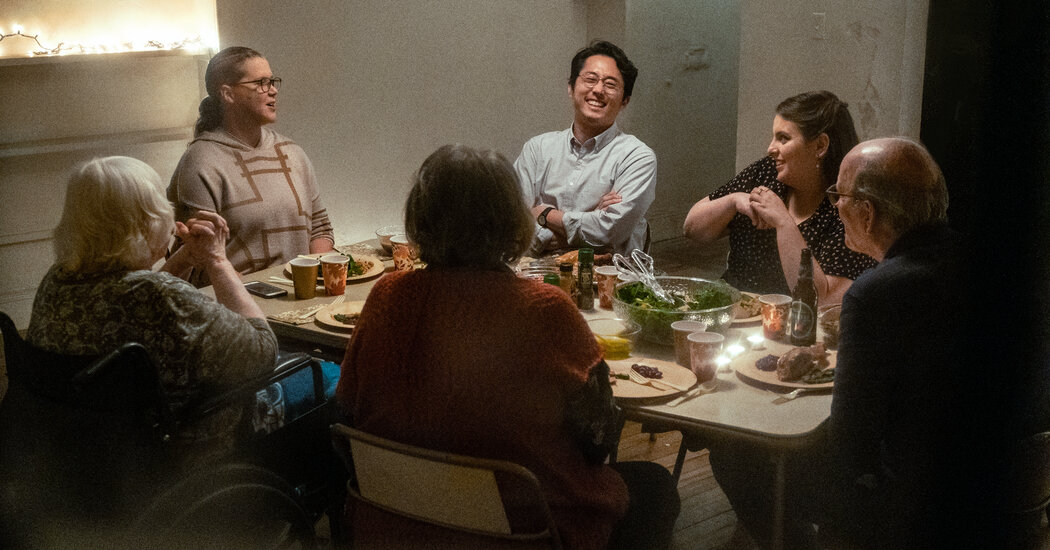 “The Humans” — Stephen Karam’s startling film of his 2016 Tony Award-winning play — has seven characters, only six of whom are human. The seventh is a dilapidated Manhattan apartment where three generations of the Blake family have convened for Thanksgiving dinner.

The occasion is also a housewarming for Brigid (Beanie Feldstein) and her boyfriend, Richard (Steven Yeun), who have just moved in together and seem blithely unfazed by the monstrous disrepair of their new home. Not so Brigid’s father, Erik (Richard Jenkins), whom we meet staring through a filthy window at the uninviting courtyard below. There’s something despairing in the slump of his shoulders and the set of his mouth; but neither his wife, Deirdre (the magnificent Jayne Houdyshell, reprising her stage role), nor his older daughter, Aimee (Amy Schumer), seems to notice. His mother, Momo (June Squibb), her mind confiscated by dementia, is demanding all their attention.

“Don’t wait until after dinner,” Deirdre whispers ominously to Erik, teasing at least one uncomfortable revelation. And as the evening wears on and banal pleasantries rub shoulders with more pointed exchanges, secrets spill with almost comical regularity. The confessions and tensions are commonplace, but “The Humans” is never less than high on the terrible power of the mundane. To that end, Karam, aided by Skip Lievsay’s marvelous sound design, gives the apartment an eerie, sinister life. Thuds and groans and rumbles disturb the dinner, as if the family’s psychic baggage — Erik’s petrifying nightmares; Momo’s unearthly screaming fit — has stirred something foul in the home’s sludgy depths.

Thrusting into every crumbling corner, Lol Crawley’s camera distorts and blurs. A faceted glass doorknob turns the screen into a honeycomb of refracted light. Pustules of water-damaged paint bloom on the walls and exposed pipes flake and gurgle. An oppressive sense of ruin blankets the film, its repeated adoption of Erik’s gaze suggesting the projection of an ongoing mental collapse.

“Don’t you think it should cost less to be alive?” he bursts out at one point, seemingly at random, as if the decrepitude around him has stirred much larger anxieties. And had I not seen the play, I may not have fully registered how ingeniously Karam has used the freedom of film to open up and underscore his already powerful material. Inside that haunted house, the family members in “The Humans” are all as trapped as Momo is in her illness, shrieking uselessly into the void.

The Humans
Rated R for serious illness and a sex-related secret. Running time: 1 hour 48 minutes. In theaters and on Showtime platforms.