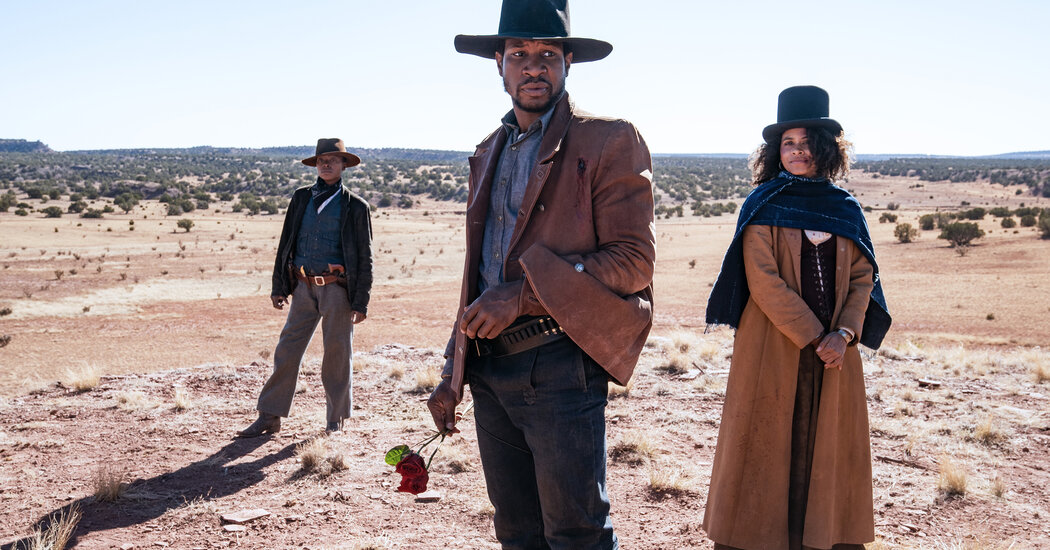 The upcoming Netflix western “The Harder They Fall” chronicles a blood feud between the Nat Love Gang and the Rufus Buck Gang. As in many westerns, the dueling outlaws hold deep grudges. They live outside polite society. They shoot first and occasionally get around to asking questions.

They’re also all Black, a fact that goes unmentioned throughout the course of the film. “The Harder They Fall,” directed by Jeymes Samuel and starring an impressive lineup of stars, doesn’t use race as a means of social commentary, as many Black westerns have. Its radical gambit lies in reminding us there were Black outlaws and lawmen, even if they’ve often been given short shrift by the genre. The film makes its point through this brazen matter-of-factness.

“This is a western about Black people doing their own thing in their own space,” Samuel, a London native, said during a video call from Los Angeles. “It’s a western for us. We have been ignored from the history of the Old West and the cinematic presentation of what the Old West was.”

Samuel is correct in that what we think of as classic mainstream westerns tend to be white affairs. On the margins, however, the Black western is nearly as old as the genre itself. Race movies, or low-budget films made for Black audiences during the Jim Crow era, frequently featured western stories. Many of these starred Herb Jeffries, who often played a singing cowboy in the mold of Gene Autry. Some of the films were quite topical: In “Two Gun Man From Harlem” (1938), a Black man is framed by a white woman for the murder of her husband.

“These films are similar to the Roy Rogers and Gene Autry movies, which were very popular,” said Rick Worland, a professor of film at Southern Methodist University in Dallas. “Basically, they were Black-cast westerns” — not unlike “The Harder They Fall.”

Meanwhile, the Hollywood western seldom made room for Black characters. One exception was Woody Strode.

A former football star — he played alongside Jackie Robinson at the University of California, Los Angeles — Strode became a favorite of the king of the western, John Ford, who was smitten with Strode’s physicality and striking features. The parts could be demeaning; In Ford’s “The Man Who Shot Liberty Valance” (1962), Jimmy Stewart’s Yankee senator hands Strode’s Pompey a wad of “pork chop money.” But Ford also gave Strode center stage in “Sergeant Rutledge” (1960), the story of a Black cavalry soldier and former slave charged with raping a white woman and murdering her and her father.

When Samuel sees a film like “Sergeant Rutledge,” he notes that the Black character’s presence must be explained in some way. “Every time they’ll show a Black person in a western, somewhere along the line they’ll give a reason for why that particular Black guy is in that town,” he said. “It’s like, ‘Oh, he used to belong to Laura Ingalls’s family,’” a reference to the author of “Little House on the Prairie.” He added, “Come on man, we can’t just exist in the town? We can’t just exist?”

By the early ’70s, and the advent of cheaply made Blaxploitation movies, the rules and expectations had changed. “The goal with Blaxploitation was to just churn this stuff out very quickly,” said Eric Pierson, professor of communication studies at the University of San Diego. “So you reach for inspiration wherever you can.” That often meant genre movies, be they horror (“Blacula,” 1972) or westerns.

Some of these were quite good. In “Buck and the Preacher” (1972), Sidney Poitier’s wagon master and Harry Belafonte’s con man come to the aid of freed slaves under attack by vicious labor agents. As Worland pointed out, the white agents in “Buck and the Preacher” serve the same function as Native Americans in classic westerns. “The savages are essentially the white racists,” Worland said. “They rape women and kill children. They’re doing all this stuff that Indians traditionally are portrayed as doing.”

This historical revision and retribution continued into the ’90s with “Posse” (1993). Mario Van Peebles, son of the Blaxploitation pioneer Melvin Van Peebles, directed and starred in this western about five Buffalo Soldiers in the Spanish-American War who leave Cuba and return to the United States, where they end up defending a Black prairie town from the Ku Klux Klan. The movie begins with a lengthy introduction recited on camera by none other than Woody Strode, who explains that Black Westerners did indeed help settle the land and create the West.

“The Harder They Fall” begins with its own version of Strode’s introduction, taken care of in a few quick strokes with onscreen text: “While the events of this story are fictional … These. People. Existed.”

As a western-mad teen in London, Samuel was thrilled to read about these historical figures at the local library.

“All of these people that I had never learned about before,” Samuel said. And whom he never saw on the screen. “I knew all of the words to Doris Day’s ‘Windy City’ from ‘Calamity Jane,’ but I’d never heard about Stagecoach Mary. So to find out about these people was a real treat.”

“The Harder They Fall” doesn’t much bother with white people — with one exception. In need of cash, Nat brings the gang member Cuffee (Danielle Deadwyler) with him to rob a bank. They’ve been warned their target is in a white town, and boy is it ever. The buildings are white. The roads are white. The horses are white. And, of course, the people are white. When Nat and Cuffee enter the bank, they’re met with shocked silence, much as the cowboy bar Eddie Murphy commandeers in “48 Hrs.” grows mute.

“That particular scene was fun for me because I wanted to play on the premise of what we regard as white,” Samuel said. “I really keep away from color in the movie, so you could be any race and just look at these characters and support who you support and just enjoy the universal story. But when I do go into color, I make a point of turning it on its head and making us rethink it.”

For the most part, the film’s statement is its lack thereof. With a roster of Black outlaws and lawmen, “The Harder They Fall” is a Black western.

“It’s a film about a group of people, and, by default, these people are Black,” Samuel said. “But their skin color has nothing to do with the story. Which is what we’ve been waiting for, right?”