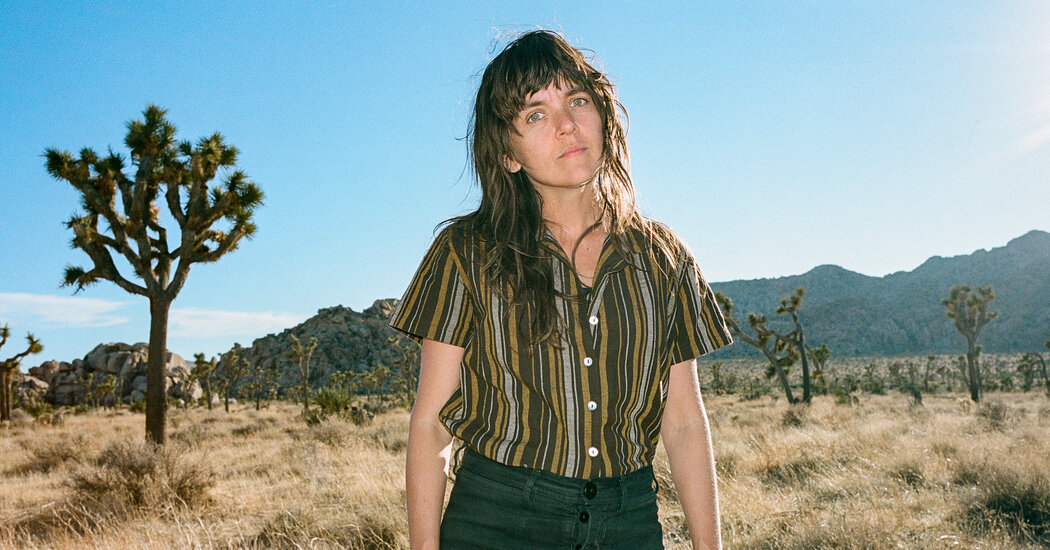 MELBOURNE — Courtney Barnett has been spending a lot of time thinking about the future.

The Grammy-nominated Australian songwriter built a reputation and an audience from spinning the minutiae of her everyday life into sprawling, clever songs. The title of her third, “Things Take Time, Take Time,” is both a reminder and new way of thinking for Barnett, 33. The album, due Friday, largely swaps her grungy guitars for soft, sweet drum machines and urges patience and reflection in its lyrics.

Barnett seems both the deliverer and recipient of its gentle prodding. A contemplative and unhurried speaker, she projects an air of calm but writes songs that betray her inner turmoil, like the metaphorical duck paddling madly beneath the smooth pond surface. In 2014 she started to gather more international attention, boosted by a performance on “The Tonight Show,” where she played “Avant Gardener,” a song chronicling a mundane day set alight by an asthma attack that lands her in an ambulance.

In a September interview, she described how she’d recently opened her copy of “Comfortable With Uncertainty” by the Buddhist teacher Pema Chodron to a chapter titled “Start Where You Are (Again and Again)” and was struck by its message: “Like: ‘Start, start right here, right now’ — as in, don’t focus on the future so much,” she said. “I’ve been thinking about that in the last few years. There’s something really peaceful in being able to just be like, ‘OK, I’m just going to do that thing — right now, for now — that I want to do, instead of projecting it into the impossible future.”

Barnett was chatting in a park near her home in Melbourne. It was the city’s 221st cumulative day under strict Covid-19 lockdown, and indoor interviews were out of the question, so she grabbed a weak soy latte and found a spot in the sun. Kids who had been stuck inside for months jockeyed for attention; a woman nearby gossiped with a friend in a shirt that said “Empathy Coach.”

Observations of how people interact when they think no one is watching recur often in Barnett’s songs. “Rae Street,” where she lived when she wrote the song that opens her new record, is filled with them. Her apartment there provided her with solitude after years of alternating between tour vans and living with her former partner, Jen Cloher.

The song pieces her glimpses of neighborhood life together with a sense of impermanence: “Next door the kids run amok/The mother screams, ‘Don’t you ever shut up?’/And there’s one thing I know/The sun will rise today and tomorrow.” That’s about as far into the future, it seems, that she’s comfortable focusing on.

During a brief gap in lockdowns last year, Barnett’s struggle to grasp what she called “the unknown elements of an unknown future” culminated in a late-night panic attack. “I walked to the emergency room at 4 a.m. and then was too embarrassed to go inside,” she wrote in an email after our interview, “and then I realized I was half-hysterical and the sun was coming up. It really knocked me around for a while.”

Overwhelmed and overstimulated, the next day she took two significant steps: She started seeing a therapist, and decided to begin watching “The Sopranos” for the first time — without knowing that the opening scene shows Tony Soprano in therapy after having a panic attack.

Barnett, like that beloved Jersey crime boss, tends to keep things close to her chest. While she was promoting her 2018 record “Tell Me How You Really Feel,” interviewers would often take its title as an invitation, and Barnett became skillful at sidestepping their demands for deep introspection.

Much of this time was captured by the filmmaker Danny Cohen, whose camera rolled from March 2018 through February 2021 as Barnett experienced the often mundane, sometimes spectacular life of a working musician: She toured internationally with her band; moved her guitars, clothes and notebooks into different sublets in Melbourne (spending a brief period sleeping in the mezzanine of the warehouse where Milk! Records, the label she founded, operates); and became the first female solo artist to win best rock album at the Australian Recording Industry Association (ARIA) awards. The result of the filming, a documentary called “Anonymous Club,” screened at the Sydney Film Festival this month.

Aware of her reluctance to open up on demand, Cohen gave Barnett a Dictaphone and requested she speak into it when she had something to say, to expel the “thoughts that you just reserve for your head and you’re not saying out loud,” he said in an interview. She ended up recording around 20 hours of audio.

In some clips Barnett tinkers away at seeds of new song ideas. She confesses early on that the conversation she’d hoped to have about her second record — one that centered “around fragility and depression and mental health” — was “swept to the side because I was too scared to talk about anything real or heavy.”

The film bridges the gap between the Barnett who felt burdened by the rigors of touring, and the one who is emerging from the world’s longest lockdown with a record that is altogether more hopeful. “Things Take Time” is a study both of the simple certainties of life and the big thing that comes after it. But in Barnett’s hands, death is not something to fear; merely something else to ponder every now and again, no bigger or more important than love or nature or parenthood or faith.

Before the pandemic, catastrophic wildfires overtook parts of Australia. Feeling like there was little to feel hopeful about, “I wrote ‘Write a List of Things to Look Forward To’ then,” Barnett said of the jangly, buoyant track on the new album that typifies her “survival technique”: being “annoyingly optimistic” in the face of a widespread extinction crisis and the deaths of her grandmother and an uncle.

She added, “And then Covid was the next year. It’s like, well, this song is so appropriate.” She attempted a laugh. It “sounds a bit morbid,” she explained, but the LP is about “how to look at life and death in an open way, not a scary way. A lot of the album feels like that for me: like a weirdly optimistic study of death.”

“Things Take Time” includes several generous and crushed out love songs, along with “Here’s the Thing,” a track that bottles up what it means to be so aware of every gesture that you feel self-conscious every time you say anything at all. When Barnett first sent the song to Stella Mozgawa, the drummer in the band Warpaint, who produced “Things Take Time,” she knew Barnett was ready to share more of herself than she had before.

“I remember thinking, ‘Wow, I’ve never heard you sing such a stark love song,’” Mozgawa said in an interview. “I remember being quite touched by that.”

As a longtime admirer of Barnett’s work, Mozgawa compared hearing the new music to being in a cinema, watching the previews and not noticing the curtains that will eventually draw back to reveal even more of the picture you realized existed. “It’s kind of like a broadening or a widening of what she’s capable of doing,” she said. “So you can see a little more of the screen, a little more of the vision.”

When a friend first suggested Barnett write a list of things to look forward to during that scary, sad summer, she thought about Joshua Tree, Calif., where she wrote several songs that appear on her new album. Soon after our interview, she returned to the desert and felt the last few years come full circle.

“Maybe life is less linear and more of a celebration of small moments,” she wrote. “I don’t know, that probably sounds so naïve.”