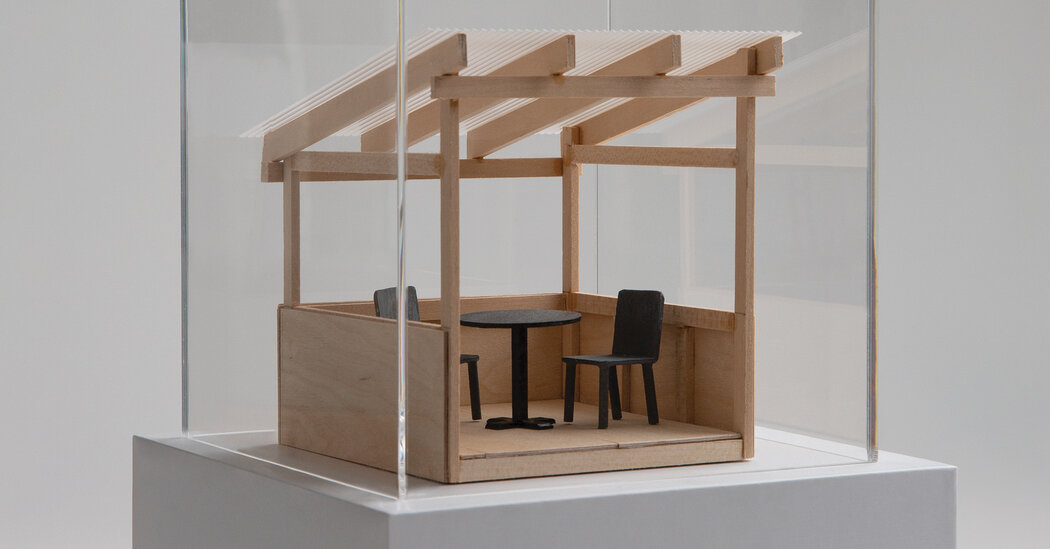 We now know that touching a menu is a highly unlikely way to contract the virus. But QR codes have proved sticky anyway. The reason is economic. Even before the pandemic, restaurants traditionally ran on very thin margins. The savings on printing costs alone are a significant incentive, but a digital menu could allow restaurants to nudge prices in real-time response to their own market costs. “QR codes have had this refresh, a new lease on life, because of Covid,” says Aaron Allen, a consultant in the hospitality industry. Millions of people finally learned how to interact with them; hotels and other businesses figured out how to use them to replace brochures and other print collateral. “What was probably going to fade away,” Allen says, “has become relevant in a way that will extend its life.”

But maybe not everywhere. Particularly at the higher end, the printed menu is one of the most conspicuous design platforms a restaurant has. “Better restaurants are going to be going back to real menus quite soon, because having that object in your hand is part of that greeting experience,” says Warren Ashworth, an architect and hospitality design expert. More value-focused eateries and chains will likely stick with the QR option that saves costs and time. So the way we react to the presence of a QR code may evolve accordingly. But we’ll know what it is — and it will be hard to explain that these interfaces used to be an overhyped curiosity with little practical value.

More significant, the normalization of the QR code as information-design surface has implications that transcend the restaurant and hospitality business, as designers figure out new ways to deploy it. Viewed expansively, QR is “a low-cost gateway” to information that can be constantly updated and adjusted, says Sandy Speicher, chief executive officer of the design firm IDEO. Retailers from Foot Locker to Macy’s have begun to use the codes as part of a touchless-payment option; small businesses such as hair salons use them for appointment check-ins, or to make it easier to tip barbers through Venmo. The familiarity and acceptance spread partly by restaurant (and patron) adaptation served as a sort of proof of concept for the form — a decade late. “That it scaled up that pervasively, that quickly, is remarkable,” Speicher says.

“Sometimes these emergencies become opportunities to create new baselines,” says Paola Antonelli, senior curator of architecture and design at MoMA. This is not always an intentional or conscious process, and the results can be troubling. The ways in which the aftermath of 9/11 helped reset baseline expectations around privacy and surveillance serve as a cautionary example. But, Antonelli says, the pandemic has perhaps established some positive new norms. This reflects another design side effect of the pandemic era: rapid experimentation, born of desperation.

There’s an argument to be made that the pandemic proved that research and innovation processes in the sciences and beyond need a refresh. Certainly it was remarkable, Antonelli points out, how quickly city governments moved to accommodate experiments like new bike lanes and allowing eateries to build outdoor spaces. Not everyone is a fan of those new structures, and it seems very likely that some kind of regulatory standards will emerge. But given the intense economic pressure to do something to help the restaurant industry and its workers, the new spaces came together with a speed that would have been “unthinkable” two years ago, says Ellen Fisher, vice president for academic affairs and dean at the New York School of Interior Design.

And Fisher believes the effects will last: “I think it’s really expanded the design vocabulary of the restaurant, what the boundaries are.” In a sense, she argues, it has returned the eatery to earlier roots as a center of community and gathering, “almost like a modern-day version of the plaza — like in Venice, the extension of the cafe into the square. I don’t think that’s ever going to go away.”

One place where this particular “design emergency,” as Antonelli calls it, has been most visible is the white-collar workplace. There has been much fevered speculation about the way offices might now be redesigned and re-envisioned to accommodate a “hybrid” model, with a chunk of employees opting to continue working from home a few days a week. Maybe desks will be configured differently, ending the reign of the widely loathed open-office scheme; maybe there will be even stranger developments. A company called Poppy is marketing a device that can monitor the air for traces of pathogens.

The Best Apps For Home Remodeling

MSI provides a whole catalog of free web-based tools to visualize their collection of materials in your home. The flooring and countertop visualizers allow you to simply upload a photo…