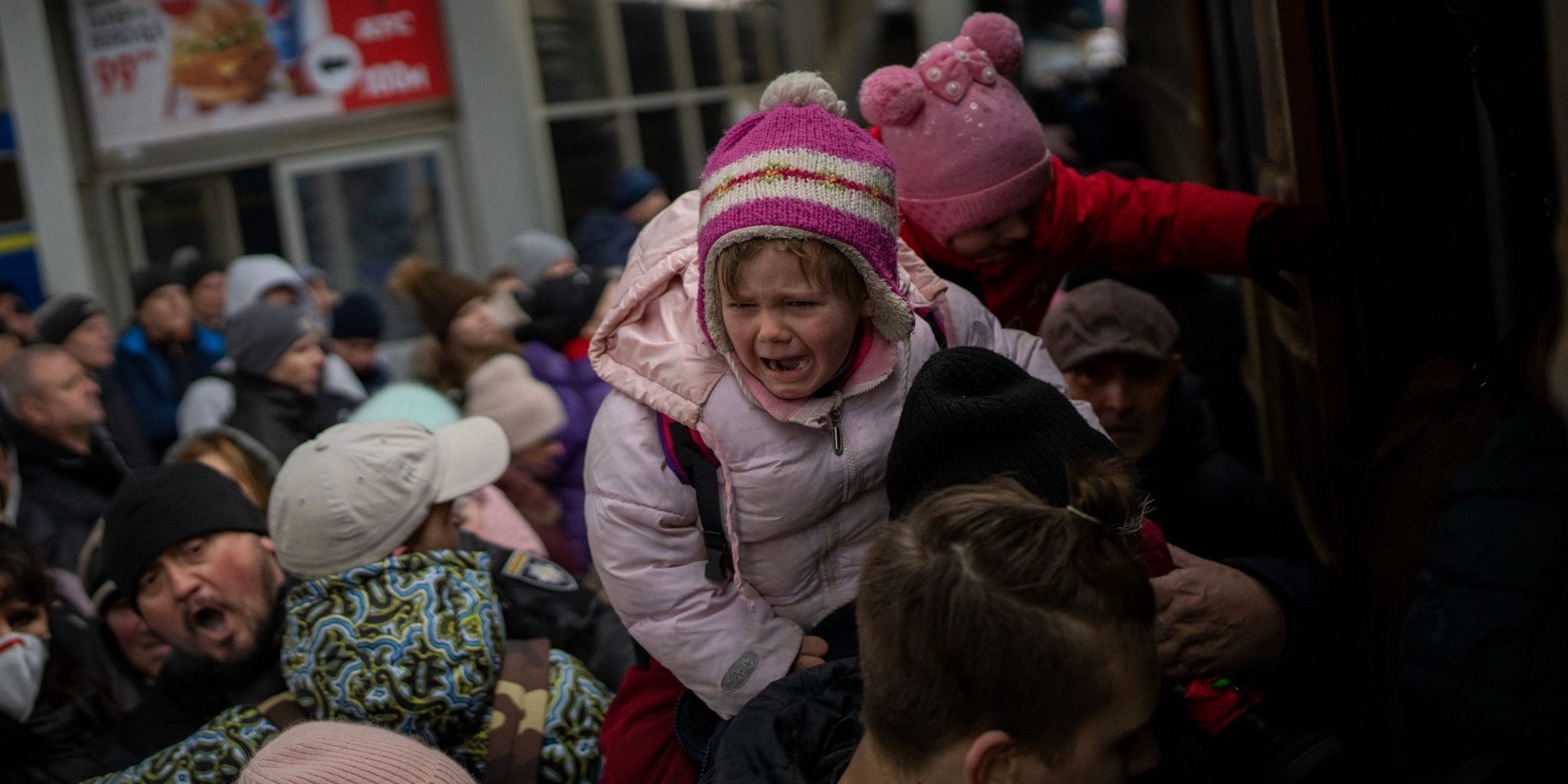 Headlines coming out of Ukraine are heart-rending. More than half of the nation’s millions of children displaced. Hundreds of thousands deprived of their usual sources of food. Innumerable daycares and schools closed or destroyed. And most disturbing of all are the images: a 14-year-old boy hit in the back by multiple pieces of shrapnel; an 11-year-old girl shot in the face; a toddler killed by a missile blast. The “special military operation” announced by Russian President Vladimir Putin in February takes on a very different and far more human cast when viewed through the eyes of its most vulnerable victims.

Some might argue that such perspectives are irrelevant. What matters is geopolitics, the need for the relatively land-locked Russian state to secure greater maritime access, or the need for NATO to contain Russia’s ambitions for westward expansion. Or perhaps economics is key—the disruption of world food supplies, the growing dependence of Europe on Russian petrochemicals, and the crushing impact of Western sanctions on the Russian economy. Faced with such global considerations, what world leader could afford to focus on the suffering of children, who play no role in creating or resolving such crises?

William Blake, however, knew that no world-historical narrative, no matter how grand, should blind us to the humanity of a child. Perhaps the greatest poet-artist ever to work in the English language, Blake sought to refocus the attention of his fellow citizens and all of humanity away from the purported benefits of megatrends such as colonialization and industrialization and toward their lamentable impacts on the lives of individual children. For Blake, no global economic assessment, government organization chart, or battle plan can be as morally significant as the suffering or joy of a child. As he writes in Songs of Innocence (1789),

When the voices of children are heard on the green
And laughing is heard on the hill,
My heart is at rest within my breast
And everything else is still.

Poet, painter, and printmaker, Blake, who spent virtually his entire life in London, was as globally enlightened and even comprehensive a thinker as could be imagined. Regarded by many of his contemporaries as mad, he never pursued a fortune or took part in any established political party, and though a person of deep Christian faith, eschewed association with the Church of England. He believed that man’s proper concern is not power, wealth, or fame, but eternity, and he argued that eternity’s love for the productions of time is perhaps never more clearly revealed than in ordinary things.

To see the world in a grain of sand
And a heaven in a wild flower,
Hold infinity in the palm of your hand
And eternity in an hour.

From Blake’s vantage point, even a grain of sand and a wild flower—things we grasp effortlessly—are as precious as anything in the world. To see what most needs attending to, we need not travel to the halls of power in Moscow or Washington, DC, the financial districts of New York or London, or the cultural centers of Paris or Hollywood. Instead, we should explore our own backyards, where we are liable to find not only earth, plants, and animals, each an eternity unto itself, but also and most importantly the play of children, to whose joys we ought to become inclined.

It is no wonder that Blake so abhorred the suffering of children. In his day, it was common for preschoolers to be employed as chimney sweeps. Such small bodies could shimmy up and down the chimney shafts, and their labor was the cheapest available. Of course, this line of work was highly hazardous to the children who were forced into it—many became trapped in the flues, suffocated, or suffered burns, and many of those who survived later developed cancers as a result of their exposure to the carcinogens in soot.

In Blake’s magnificent portraits of the plight of the chimney sweep in Songs of Innocence and Songs of Experience (1794) are found powerful evocations of the sufferings being endured by large numbers of children in Ukraine and other parts of the world today. From Songs of Innocence,

When my mother died I was very young,
And my father sold me while yet my tongue
Could scarcely cry weep weep weep weep,
So your chimneys I sweep and in soot I sleep.

A parentless child is a terrible thing, as confirmed by the wartime condition of hospitalism, first described in the 1930s. Orphaned infants who had been rescued, placed in institutions, and fed and diapered according to schedule nevertheless failed to thrive. In fact, many wasted away, and those who did not manifested retarded growth and development. Oddly, the condition was more prevalent in better-resourced institutions. It turned out that hospitalism was due to a lack of contact between infants and caregivers, a less frequent problem in poor hospitals that could not afford incubators.

Just as infants need adults to hold and play with them, so adults need children to be reminded of our own humanity. Without such contact, we are liable to begin seeing children as cost centers or commodities, or to regard their suffering in wartime as little more than collateral damage. As Blake so poignantly reminds us, a child has no business sweeping chimneys and sleeping in soot. Children are not a means to an end but ends in themselves, and the preventable, willful suffering of a child is as great an injury as human beings are capable of inflicting on the larger order of creation.

In his second poem on the chimney sweep, Blake indicts the hypocrisy of a community that allows attention to supposedly higher things, including military glory, to distract us from lower and humbler but even more real ones:

A little black thing among the snow:
Crying weep, weep, in notes of woe!
Where are thy father and mother? say?
They are both gone up to the church to pray.

Imagine a Russian leader, whether political, economic, or military, holed up in a cabinet office, a board room, or a command center. Such individuals may well suppose that they are occupied with the very most momentous of human affairs—plotting strategies and tactics that may profoundly impact the course of history. Perhaps they think that, working with millions of citizens, billions of dollars, and megatons of munitions, nothing could be more important. Yet while poring intently over their charts and maps, they often fail to take into account and may not even care about each precious child.

Focusing on the many, we often forget the one. Intent on abstractions such as world dominance, we often overlook the concrete. As Blake reminds us, this is why the experiences of children are so vital. Every skirmish, every battle, and especially every war needs to be seen from the perspective of each child it will touch—not only bodily injuries but also psychological trauma, and not only direct harm to children but also the harm done to their families, friends, and communities. We need to ask ourselves, is this geopolitical objective worth destroying even one child’s life?

When we look at the world through the lens of world history, we typically fail to notice the little black things embedded in the snow. And even when we do, we often fail to recognize that each little black thing is someone’s son or daughter, granddaughter or grandson, the apple of someone’s eye, and a human being destined someday to bear, raise, and rejoice in their own fruit. When the din of battle, the roar of tank engines, and the deafening report of rifles and artillery drown out a child’s cries of woe, we find ourselves in the most morally perilous of positions.

Grand dreams, whether of the reunification of the Rus or the extinction of authoritarianism, must never blind us to the toll that war, no matter how glorious, takes on children. The mother and father who have gone up, whether to the capitol, the headquarters, or the cathedral, have surely lost their way, if it means they have abandoned the children down below. World historical events and great memorials are not and can never be, at least from Blake’s point of view, as real or as worthy as the experience of a child. There is a whole world in a child’s smile.

Those who would shape world history and be immortalized in monuments would do well to recall that, from the God’s-eye perspective, nothing can be more significant or enduring than the innocence and experience of a child. No future, no matter how great, rich, or revered, can justify inflicting harm on the least among us. In the words of Nelson Mandela and countless others, the true character of a society is revealed by how it treats children. We may own vast estates and control vast armies, but when it comes to our children, we are but stewards, and it is for them that we will ultimately answer.