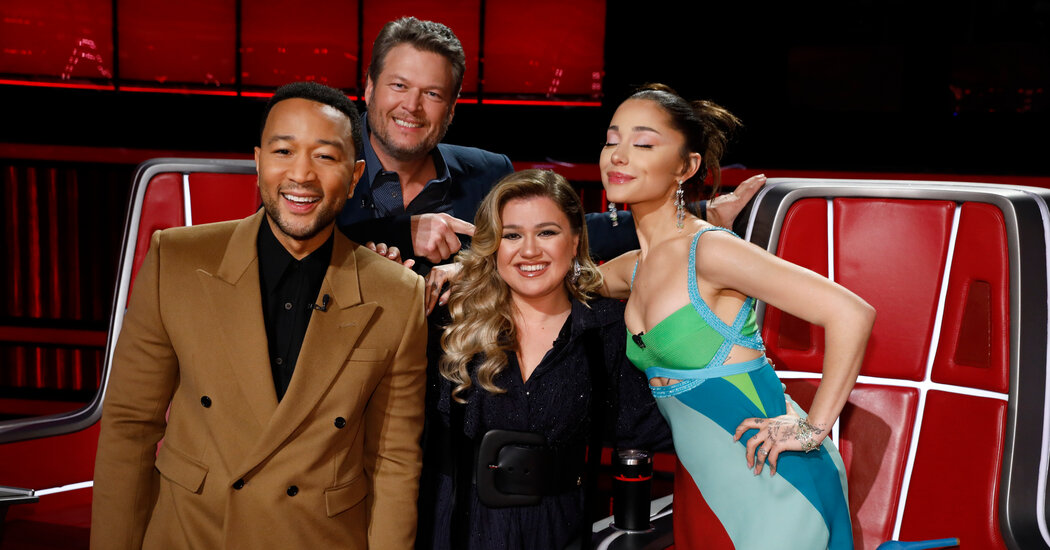 A funny thing happened on Nov. 8 on the set of “The Voice”: Ariana Grande, the show’s newest coach, came to work in a Versace dress that had been widely worn as a Halloween costume just a week earlier.

The colorful minidress — with its crystallized straps, cutesy empire-waist cutouts and chunky stripes in shades of turquoise, lime green and scarlet — appeared on the Italian luxury brand’s spring 2003 runway. But the style is best known for its brief turn in the 2004 romantic comedy “13 Going on 30,” worn by Jennifer Garner as her character, Jenna Rink, performs the “Thriller” dance at a work party.

Nearly two decades after its introduction, that dress has found a new life, thanks in part to online retailers selling uncannily similar styles for less than $20. Vogue predicted in mid-October that the vibrant look would be “everywhere on Halloween.” If TikTok is any indication, it was.

The re-emergence of the dress coincides with a burning nostalgia for Y2K-era dressing, from head (hair clips and bucket hats) to toe (flared jeans and platform sandals).

But its popularity goes beyond capturing the turn-of-the-millennium aesthetic: Celebrities and influencers have been seeking out specific archival pieces associated with pop culture moments of the aughts, said Marian Park, a youth strategist at the trend forecasting agency WGSN.

“It’s less about costume and more about opulence or decadence,” she said, pointing to a tiger-striped, high-slit Roberto Cavalli dress from 2000, worn by Aaliyah to that year’s MTV Video Music Awards. More recently it’s been worn by Paloma Elsesser, a model; Bretman Rock, an influencer; and Kim Kardashian.

Consider TikTok’s queen bee Addison Rae wearing Gucci by Tom Ford (circa 2003) to the Met Gala. Or Olivia Rodrigo wearing a plaid skirt-suit to the White House, a reference to the plaid skirt-suit worn by Alicia Silverstone in “Clueless.”

“I think we can only expect playfulness in dressing up more and more — and the affiliation with it being a costume, or something specific to a movie or a pop cultural moment, gets more diminished,” Ms. Park said. “It’s more about the look.”

Susie DeSanto, the costume designer for “13 Going on 30,” said the renewed interest in the film’s fashion has been “crazy.”

“Around Halloween, I cannot tell you how many people sent me pictures of all kinds of people — little girls, teenagers, drag queens — doing that dress,” Ms. DeSanto said. “I’ve had teenagers with fashion podcasts in Spain and Brazil contacting me and doing interviews about the clothes, sending me pictures, like: ‘Where did you get this? Where can I find this?’”

The movie’s script called for designs that would plausibly appeal to both a 13-year-old girl and 30-year-old woman — fun and sweet and naïve, bordering on sexy-baby — and “the designers and the trends of the early 2000s could not have been more on point for telling this story,” Ms. DeSanto said. Ms. Garner’s character wore a rotation of Miu Miu, Moschino and Marc Jacobs. (It helped that the director, Gary Winick, was a fashion enthusiast, Ms. DeSanto said.)

The Versace dress had been introduced the previous fall at a runway show in Milan, where Britney Spears sat in the front row and which Cathy Horyn, then the New York Times’s fashion critic, compared to “being mugged by a gang of angry Barbies.”

While the costume may be losing some of its affiliation with the film, the dress owes its resurgence largely to one of the movie’s stars. Last Halloween, Christa B. Allen, who played the younger version of Ms. Garner’s character, bought a re-creation of the dress on Etsy, then recreated a scene from the movie while wearing it on her TikTok account. The video has more than four million likes.

“Cosplay is huge on TikTok,” Ms. Allen said. “I realized: People love Jenna Rink, and I feel like I can give them a way to revisit that character and spend more time with her.”

Around the same time, the model Elisha Herbert shared photos of herself on Instagram wearing a re-creation of the dress she had commissioned from Nasteski, a small Australian festival and swimwear label whose customers idolize the style of 2000s celebrities like Paris Hilton.

When Anthea Nasteski, the designer, reposted those photos, she received dozens of comments and a handful of commissions — like the Etsy seller, she was charging more than $400 — but didn’t really advertise the dress, she said. She felt at the time “it was in bad taste that I would resell someone else’s design,” even if that someone was Donatella Versace.

Ms. Nasteski had also made the dress fairly quickly; with only had a few days between Ms. Herbert’s commission and Halloween, she used Lycra and tie-dyed fabric scraps she already had in her studio.

Yet months later, in the summer of 2021, when the dress was suddenly being sold by sites including Cider and Amazon for less than $20 — and going viral because of it — these new replicas used the same tie-dye effect as Ms. Nasteski did. The photos on the Amazon listing are the same as those on Ms. Herbert’s Instagram.

To Ms. Nasteski, this was another example of small designers seeing their work, without credit, on the platforms of large e-commerce companies. But it was also more complicated. It was her altered design, but it was also not her original design.

When the cheaper versions of the dress were introduced, “all of a sudden it was everywhere,” Ms. Allen, the actress, said. “I think if you wear it out, and people around you know the movie and know the character, then you get to share this special fun moment. But if they don’t know the dress and the character, then it’s still a great dress.”

Ahead of her 30th birthday on Nov. 11, Ms. Allen reached out to Versace to see if she could borrow the original. But, she said, was kindly informed that the dress had already been committed to someone else. (She later discovered it was Ms. Grande.)

Today, the dress no longer seems dependent on nostalgia for or even familiarity with the film, said Mandy Lee, a trend analyst with a large following on TikTok. She recently reported seeing one in the wild, worn by a shopper at the vintage store Beacon’s Closet, who had styled it with fishnet tights.

“I don’t think it’s really a costume anymore,” Ms. Lee said. “Some Gen Z don’t know the reference, so when they’re looking at it for the first time, they might not have that memory sparked from the movie. It’s no longer the ‘13 Going on 30’ dress. It’s just another cute dress.”

Still, she is not convinced that the dress has longevity after this most recent bout of exposure. At under $20, it was “there for the taking,” she said, which helped the dress go viral. But that may also have killed it, turning it into a micro-trend that people come to hate because they see it so much, fated for the garbage can or a thrift store.

“The hyper-exposure you have online now can sometimes ruin things,” Ms. Lee said.

World Health Organization (WHO) Chief Scientist Soumya Swaminathan attends a press conference organised by the Geneva Association of United Nations Correspondents (ACANU) amid the COVID-19 outbreak, caused by the novel…