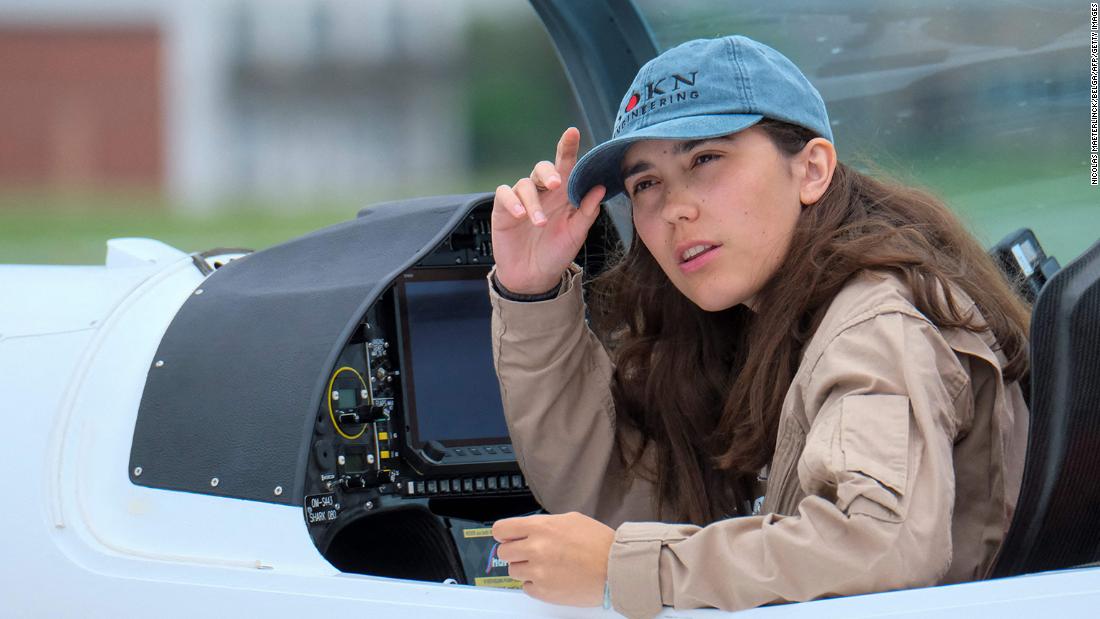 (CNN) — Teenage aviator Zara Rutherford has become the youngest woman to fly around the world solo.

The 19-year-old, who has dual British-Belgian nationality, landed at Kortrijk-Wevelgem Airport in western Belgium on Thursday, completing an epic 41-country journey spanning over 52,000 kilometers (32,300 miles), and broke two Guinness World Records in the process.

Not only has she beaten the record held by American Shaesta Waiz, who was 30 when she circumnavigated the globe unaccompanied in 2017, Rutherford also now holds the title for the first woman to circumnavigate the world in a microlight aircraft.

She is also the first Belgian to fly around the world alone.

However, the teenager’s route to glory hasn’t been without its challenges.

When Rutherford departed on August 18, 2021 in a bespoke Shark ultralight aircraft, she believed her aerial escapade would take about three months.

But she has been plagued by setbacks, including month-long delays in both Alaska and Russia due to “visa and weather issues,” pushing her schedule back eight weeks.

She was also forced to make an unscheduled landing in Redding, California due to poor visibility as a result of the wildfires in the Seattle area and was later denied permission to fly over China.

“I was hoping to complete it by Christmas but I guess that’s not happening anymore,” Rutherford told reporters at Gimpo International Airport in Seoul, South Korea after arriving from Vladivostok on December 13. “But it’s an adventure.”

While she’s flown to an array of destinations, such as Singapore, Egypt and Greece, along with Russia and South Korea, Rutherford has been unable to explore any of them on land due to Covid-19 restrictions.

The final leg of her journey was also hit with delays due to bad weather, which meant her completion date was moved back another week.

Rutherford is currently on a gap year and plans to go to university in September to study computer engineering. Although both of her parents are pilots and she has been learning to fly since she was 14, Rutherford didn’t get her first license until 2020.

One of her main aims for this challenge, aside from breaking Waiz’s record, was to ensure greater visibility for women in aviation.

Last year, Rutherford spoke of her disappointment at the fact that just 5.1% of airline pilots around the globe are women, according to figures from the International Society of Women Airline Pilots (ISA).

“[5%] is such a small number, considering it’s a career where you basically get paid to travel around the world — obviously it’s work, but it’s an amazing career with amazing opportunities,” she told CNN.

Rutherford has been supporting two charities on her trip: Girls Who Code, which helps young women entering computer science, and Dreams Soar, a nonprofit founded by Waiz, that supports women and girls entering STEM fields.

She hopes that her high-profile journey will encourage more young girls and women to consider a career in aviation.

“It’s an easy thing to say, but just go for it,” Rutherford added. “If you don’t try and see how high you can fly, then you’ll never know.”

The two-seat ultralight aircraft she completed the journey in was provided by Shark Aero, one of the sponsors for the trip, with customizations such as a second radio, and an additional fuel tank in the place where the second passenger seat would typically sit.

The plane has an optimum cruising speed of 140 knots (about 160 mph), according to Rutherford’s official website Fly Zolo, and is equipped with an integrated parachute.