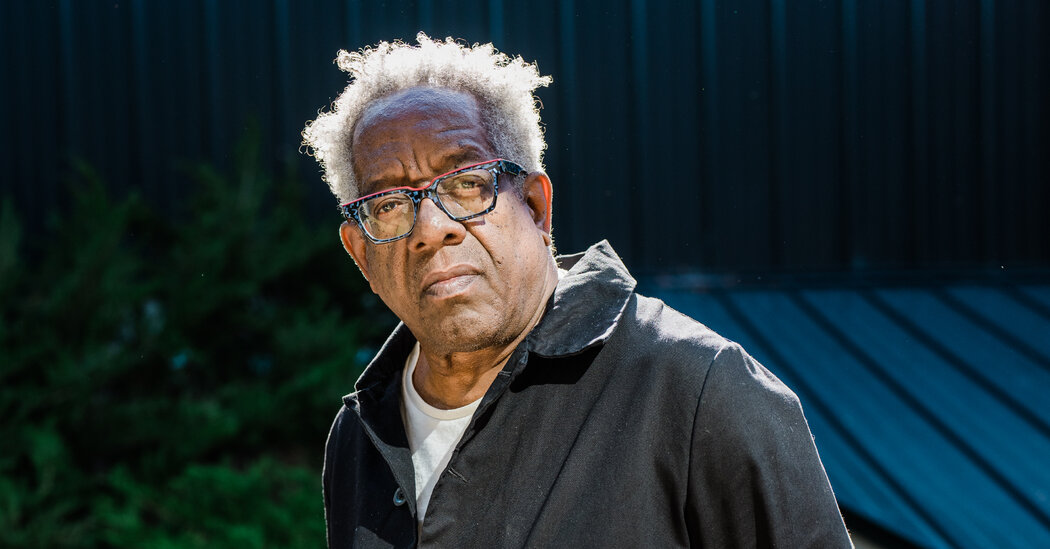 BRIDGEHAMPTON — Stanley Whitney starts every painting the same way. Like a bricklayer, the 74-year-old artist paints a horizontal band along the top edge of the canvas, then lays down blocks of saturated color, from left to right, across and down, in a vibrant, wobbly, improvisational grid.

“It’s like call and response — the paintings tell me what to do,” said Whitney, who can move right through the paces in one blast, or jump backward or forward as the canvas requires. For the last three decades he has cranked Miles Davis’s “Bitches Brew” each time he paints. “It gets me in the zone,” he said. “You kind of become the music.”

Across canvases large and small ringing the walls of his capacious new studio, Whitney achieved glorious variety in palette, rhythm, juxtaposition and touch. Many of these paintings created over the last year will go on view Nov. 2 in “Stanley Whitney: TwentyTwenty” at Lisson Gallery in Chelsea.

The artist Adam Pendleton, who owns a number of paintings and drawings by Whitney, admires his older colleague’s “dogged dedication to a toolbox that appears fixed but is infinite in all the ways he unfixes it,” he said. Whitney’s longstanding engagement with the grid is about “how to break down visual order and imbue it with music, with life, with a kind of poetic.”

Whitney and his wife, the painter Marina Adams, have just finished a two-year project building their two adjacent studios and house in Bridgehampton, all lofty barn-shaped structures made from low-maintenance industrial black metal. For decades, Whitney painted in the hall of the couple’s apartment on Cooper Square in Manhattan. Success was slow in coming.

Whitney first came to New York in 1968, with the ambition to paint abstractly, at a time when Black artists were expected to make representational work reflecting African American life, and painting itself was falling out of favor in the art world. “As a young Black artist, that in itself was a very radical position to take,” said Alex Logsdail, executive director of Lisson.

“I was always a colorist,” said Whitney, who got his MFA at Yale in 1972 and borrowed from artists including Matisse, Cezanne, Pollock and Rothko as he figured out how he wanted to paint and how he fit into the New York scene that largely ignored him. “I’d go to all the galleries, get to my studio and say, ‘Well Stanley, you see what they like, do you want to keep doing this?’” he recounted. “And I would say, ‘Yeah, I want to keep doing this.’”

The art world has finally caught up.

Simultaneous exhibitions in 2015 at the Studio Museum in Harlem and Karma gallery downtown brought Whitney critical acclaim, at a moment when museums and dealers were broadly beginning to reassess the work of marginalized artists. Lisson began its representation soon after, now with its ninth solo Whitney show at the gallery’s spaces in New York and Europe. “Light a New Wilderness” (2016) set an auction record for the artist this year at Christie’s London of 525,000 pounds (more than $700,000), almost three times its high estimate. And Whitney’s first retrospective is being planned for 2023 at the Buffalo AKG Art Museum (formerly the Albright-Knox Art Gallery in Buffalo), organized by its chief curator Cathleen Chaffee.

“I realized how important it would be to create a larger show of these works, from his formal experimentations in the ’70s until these iterative paintings from the past 20 years, that could unfold in space and time in relationship to one another,” said Chaffee. She compared Whitney’s mature practice to that of Giorgio Morandi, Josef Albers and Agnes Martin, who all found freedom working within a set of limits created for themselves.

In April, for the Venice Biennale, Chaffee is organizing a presentation with the curator Vincenzo de Bellis at the Palazzo Tiepolo Passi of Whitney’s paintings made in Italy since the early 1990s, a crucial turning point in his practice. Frustrated by his invisibility in New York, Whitney, who had been commuting weekly to Philadelphia to teach at the Tyler School of Art and Architecture since 1973, took the opportunity through the school to move with his wife to Rome for five years beginning in 1992. There, inspired by the mass, density and simple geometry of the Colosseum and the Pantheon, as well as the pyramids on a trip to Egypt, Whitney began to collapse and compress the space surrounding the elements in his allover compositions.

“I got the idea of stacking things,” said Whitney. “I wanted a system that you could see right away.”

The Venice exhibition will include 1990s works, which show a clear relationship with ancient architecture in their jangly, gestural grids, and more refined canvases painted over the last two decades during summers Whitney and Adams spent at a house they bought outside of Parma and that reflect the influence of Morandi’s meditative still lifes.

Whitney’s first museum commission will be revealed next month with the opening of the Baltimore Museum of Art’s new Ruth R. Marder Center for Matisse Studies. There, Whitney has channeled his love of Matisse’s organic line and vivid color into three large-scale stained glass windows titled “Dance With Me Henri.”

“Stanley’s work is so much about structure built through color, he’s a natural for a large architectural commission,” said Katy Siegel, the museum’s senior curator for research and programming. In interviews, Whitney has often referred to Matisse painting his sensual work in Nice during wartime, with Nazis in the streets — an image not dissimilar to Whitney describing himself as a student in the mid-60s painting in the basement at the Kansas City Art Institute, as the civil rights movement was raging outside.

“He relates to that sense of Matisse as well,” said Siegel, “that you can be living through these very challenging times but be making work that is about your own freedom as an artist, and not specific political messaging that’s easily legible.”

Last year, a show of Whitney’s sketchbook drawings at Lisson titled “No to Prison Life,” to benefit the philanthropist Agnes Gund’s Art for Justice Fund, “made overt the political statement in the works that one wouldn’t think of as being political,” said Logsdail, the artist’s dealer. Framed by the subject of incarceration, “suddenly the primordial grids and abstract shapes were transformed into a claustrophobic and locked cell,” Gund wrote in a statement about the show. (Whitney’s 2004 canvas “By the Love of Those Unloved” hangs prominently in Gund’s apartment, in place of the Roy Lichtenstein painting she sold to start her fund to help reform the criminal justice system.)

A drawing dense with circuitous graphite lines, titled “Always Running From the Police — NYC 2020,” references Whitney’s own experiences growing up in Bryn Mawr, Pa., where his family lived above his father’s shoe shop. “As soon as we got off the train, the police would stop us,” said Whitney, who liked to go into Philadelphia with his friend as a young teenager to draw. “One cop stopped me every day after school. It was a game we played. I thought that was life.”

At art school in the Midwest, Whitney combined aspects of new discoveries including Munch, Courbet and Velazquez with his self-portraiture. But he didn’t like the psychological conversation around this work and stopped. In a summer program at Skidmore College in 1968, he became the favorite of his teacher Philip Guston, then an Abstract Expressionist on the cusp of a radical style change. “I met him when he was lost and I was lost, although I was going from figuration to abstraction and he was going the other way,” said Whitney, who credits Guston with teaching him how to put a painting together and recommending him for a program that got him to New York City.

Whitney described being a “witness” to the art world, close for a decade with Robert Rauschenberg, who introduced him to many people in his home. “Race was always a factor,” Whitney said. “They wanted you to be their hip Black guy and I wasn’t an entertainer.” He knew the other Black artists working downtown in the 1970s, including Jack Whitten, Al Loving, McArthur Binion and James Little. “But we were really on our own,” he said. “Everybody was struggling so much.”

Whitney did learn from Whitten the art of living well. “Jack went to Greece every summer and had a good life, whether the art world dealt with him or not,” said Whitney, who followed his example by going to Italy every summer. Of Whitten’s own dramatic change in fortune, facilitated with representation by the mega-gallery Hauser & Wirth before his death in 2018, Whitney said: “Jack knew he got it done.”

Watching Whitney improve with age has been inspirational to the painter Odili Donald Odita, who befriended the artist after seeing his 1995 exhibition at Skoto Gallery. “I see him still as a mentor and a benchmark for what it is to be successful as a craftsperson making great paintings, trying to grow them better,” said Odita.

Whitney said he anticipates his retrospective with a mix of excitement and trepidation. “It will be interesting to see what I’ve done,” he said. “You want to see if you can hang with the big boys.”