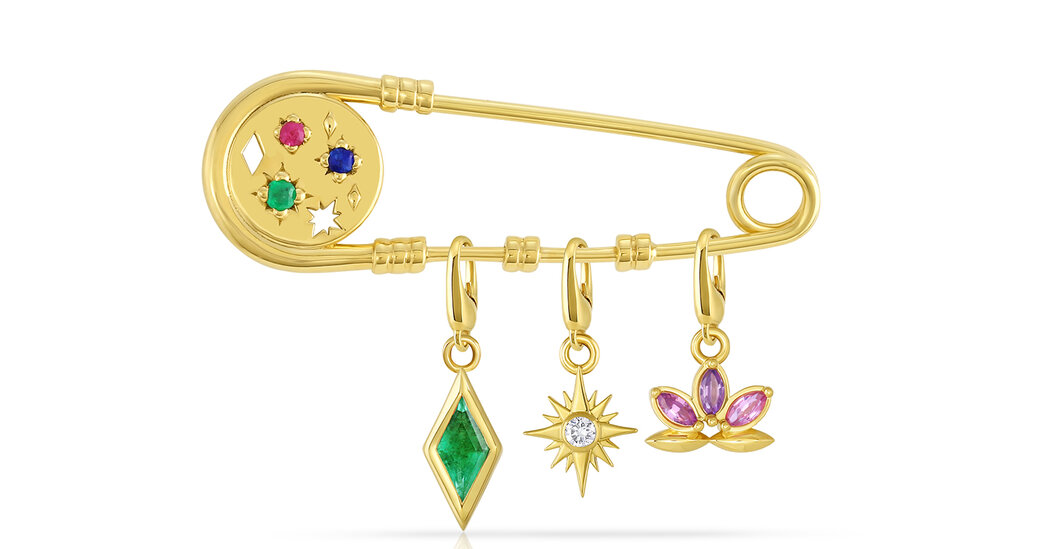 There is no doubt that jewelry design can be an all-consuming occupation, requiring creativity and an ability to also juggle the behind-the-scenes realities of production and sales.

But multihyphenates who make jewelry while engaged in other vocations are multiplying. Motivated by a mix of impulses, from artistic fulfillment to social justice, they have been bringing skills that they honed in other professions to their sparkling passion projects.

And, from a practical point of view, they say, the ability to earn additional income and a sense of accomplishment from another occupation certainly doesn’t hurt.

For Zulaikha Aziz, 43, the eight years she spent as a lawyer consulting on international human rights projects for organizations including the United Nations and World Bank were the unlikely route toward starting her jewelry collection. By 2019, while facing what she described as deteriorating security conditions in Afghanistan, she decided to wind down the project she was working on to begin focusing on a jewelry line.

Ms. Aziz, who left Afghanistan and now lives in Laguna Beach, Calif., has always felt a deep attachment to jewelry. It was, she said, “my first real form of connection with my own culture and heritage.”

While she was still an infant, her family had immigrated to the United States from Afghanistan in the wake of the 1978 revolution that toppled the monarchy and led to the establishment of an Islamic republic. The family jewels that her maternal grandmother brought to America at the time were among their few mementos of home.

When Ms. Aziz established her jewelry brand in March 2021, she called it Mazahri, her grandmother’s first name. It now offers 18-karat pieces like the Cosmos ring, with eight small gems circling a central stone (from $3,385) and the Baby Nazar pin, a safety-pin that can be worn as an earring, brooch or pendant with a small ruby, emerald and sapphire ($1,500) that is Ms. Aziz’s interpretation of the talismans often pinned to the clothing of Afghan babies. Her work is sold online and available from Robert Goodman Jewelers in Zionsville, Ind., and Adornment + Theory in Chicago.

“If these are things that people are going to pass down, I want them to be created with love and positivity and to carry that forward,” Ms. Aziz said of her jewelry. To that end, she uses gold certified by Fairmined and colored stones that she almost always can trace to the mine, or even the miner. Her casting house is certified by Fairmined and her custom orders are made by a small family-owned manufacturing house.

Shortly after she introduced Mazahri, the Afghan government collapsed and the Taliban took control of the country again. Ms. Aziz immediately returned to the law as co-director of the Berkeley Law Afghanistan Project, which helped people trying to flee the country, although she also continued to fulfill jewelry orders. She returned to Mazahri full-time in January.

“In certain years, I might be more focused on the law; in others, I’ll be able to focus on my jewelry,” she said. “It will always be about finding a sustainable way to meld the two.”

She founded Thesis Gems & Jewelry in 2017 in response to the sense, she said in a recent phone interview, that “something was missing” from her life and to counter a few jewelry dealers who created “bad experiences in terms of transparency and quality.”

Her focus is bespoke and limited production jewelry that features materials extracted and handled according to ethical practices: “I wanted to know where every stone was from; where do they get cut; who does the work; who benefits from the work.”

At first, her company sold fine jewelry exclusively of her own design, produced from Fairmined gold and made in collaboration with goldsmiths who fabricated the pieces by hand or cast them from individually carved waxes. Over time, she began to focus on, as she said, “phenomenal gemstones, opals and pearls,” and emphasizing signet and toi et moi rings, the popular style that features two, sometimes dissimilar, gems.

Thesis has offered, for example, a version of The Bridge ring featuring a Thai ruby and a Sri Lankan sapphire ($13,900) as well as a selection of loose colored stones and antique and reclaimed diamonds.

Dr. Claus’s business now includes collaborating with and selling the creations of independent designers including Andrea Capello, Joseph Ramsay and Vanessa Fernández. Sometimes, Dr. Claus said, she will give one of them gemstones to work with and then sell the results to a “smattering of clients from all over” through her website, Instagram channel and private events.

While some might say there is no relationship between medicine and jewelry, Dr. Claus said she believed they complement each other. “Medicine has been incredibly stressful for the last few years,” she said. “Thesis has provided an outlet for creativity that has bolstered my efforts and resourced me as a doctor.”

And some of her patient care skills have aided her relationships in the jewelry business. “Doctoring has helped me understand where a client is coming from and be a listener, and deeply appreciate what the jewelry represents for the client,” she said.

The technical skills that Rosa Van Parys, 46, developed as an architect have been key to her jewelry. “When you’re an architect, you think in 3-D,” she said. “Symmetry, balance, composition and use of color are our key design principles.”

And the same qualities are apparent in her jewelry brand, which she runs with the help of her husband and business partner, Michael: “Our pieces are not super organic; they’re symmetrical and angular. I don’t have a background in jewelry, but I have a good eye.”

Raised in Ecuador, she earned degrees in architecture from institutions including the University of Southern California and Harvard University before settling in the Los Angeles area. There, the couple founded Van Parys Architecture + Design, a firm specializing in what she described as “high-end residential architecture and interior design.”

She initially made jewelry as a hobby. A dealer from whom she bought pearls, but declined to name, became a mentor and around 2015 encouraged her to add gold and precious stones to her designs, many of which are fabricated in Hong Kong.

After selling a handful of necklaces from around her neck, trunk sales followed, then a few brick-and-mortar retailers and the brand’s e-commerce website. Her prices range from $1,000 to $75,000 and may be bought online or from Reinhold Jewelers in Puerto Rico and Augustina’s Designer Boutique in Carmel, Calif.

The women from her Ecuadorean hometown, Quito, influenced her choice to focus on pearls. “That’s the gem the ladies wear — very classic and understated,” she said. But she uses them in edgy designs: Her signature dagger pendants often feature large pearls accented with metal studs and diamonds or framed in gold elements with colored pavé stones.

Her architect’s instincts for adaptable design figure into her collection. “All of our jewelry is modular,” she said, noting that 95 percent of her clients do decide to choose alternate chains, lengths and gem combinations.

With a career that spanned more than three decades, the Toronto native Lana Ogilvie has been among the few models who managed to continue working in a notoriously fickle industry. But before (and after) that success, she harbored ambitions in another field: the visual arts.

Since childhood, Ms. Ogilvie had experimented with various mediums, including drawing, printmaking and illustration. “When you’re working, the question is always how to keep your creativity going,” she said.

But “modeling is freelance,” she said. “You don’t do it every day.” So during a lull triggered by the 2008 recession, she enrolled in technical school.

“I am an artist. Jewelry happens to be my current medium,” she said. “It’s the only art form with which you can have such an intimate relationship; it’s on your body, not standing in a corner or hanging on a wall.” In 2016 she introduced her label, Sabre Jewelry.

Her work consists mainly of sculptural pieces, cuffs, weighty cigar-band rings and large hoops with irregular curvy lines, in silver, vermeil and sometimes brass, along with a capsule of pieces in 14-karat gold with diamonds. “I love movement, that when you look at the metal it looks like it’s flowing,” Ms. Ogilvie said. She sells on her website and 1stdibs, as well as the Clic Gallery on St. Barts and the occasional pop-up boutiques.

She has continued to model, something she had never expected as a teenager. “When I started out, having a long career — modeling after 30 — didn’t exist,” she said, declining to disclose her age.

Her multitasking extends to pursuing a degree in jewelry design at the Fashion Institute of Technology in New York City, where she now lives. (In 2019, she also introduced a skin care brand that bears her name.)

That hasn’t stopped her from contemplating the next entry on her jewelry résumé: “I’d love to work with a big brand as a designer.”