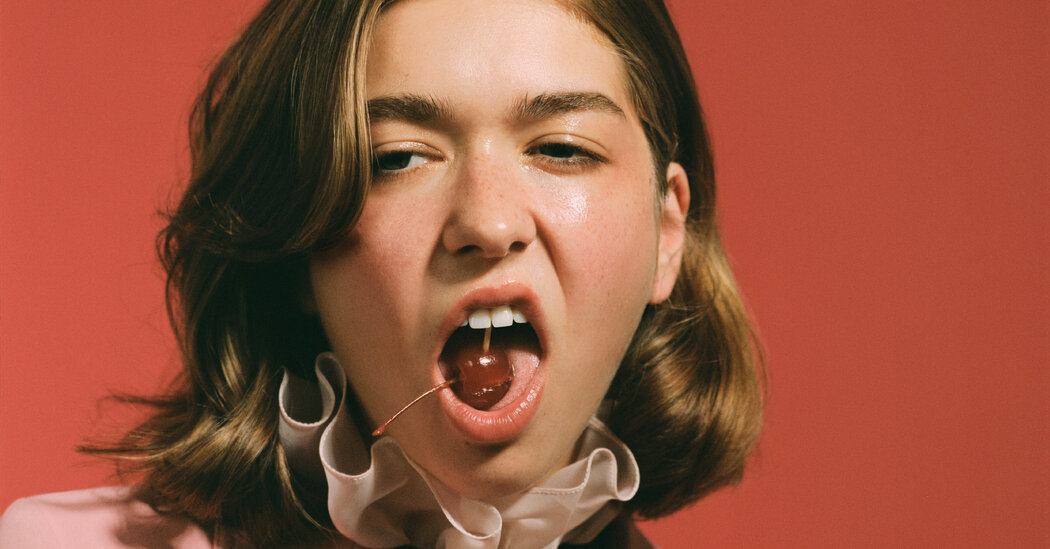 Lindsey Jordan is far from the first person to have her heart broken, but “Valentine,” her remarkable second album as Snail Mail, is alive with such crackling and revelatory emotion that for about 32 minutes it allows you to suspend disbelief and imagine — well, what if she is?

“Why’d you wanna erase me, darling valentine?” Jordan snarls on the leadoff title track, a song that careens with the precarious dynamism of a carnival thrill ride. Repeated plays won’t prepare listeners for how wonderfully loud the chorus gets, how suddenly and furiously the song shifts from a brooding, synth-driven sulk to an all-out temper tantrum of the heart. “You always know where to find me when you change your mind,” she adds, and when is the operative word. This album’s narrative arc is shaped like a dizzying spin through the Kübler-Ross stages of grief, and the opener captures the precise moment that denial billows into a conflagration of hot anger.

Jordan was just 18 when she released the debut Snail Mail album, “Lush,” and it established her (alongside artists like Soccer Mommy and Vagabon) as a crucial voice in a new wave of young women making feelings-forward, guitar-driven indie rock. (Though she started it as a solo project, Snail Mail is now a trio featuring the bassist Alex Bass and the drummer Ray Brown.)

“Lush,” though searching and potent, was often about unrequited crushes and unconsummated yearning. On the single “Heat Wave,” Jordan offered a quintessential Snail Mail blessing to a person identified by the adoring nickname “Green Eyes”: “I hope the love that you find swallows you wholly.” Such obliqueness made sense; Jordan was still quite young, and her processes of self-discovery and uncovering her sexuality both found expression in her songwriting. “I was always a huge fan of songs about women,” she told The New York Times in 2018. “So when I discovered that was who I was predominantly interested in, I was like, can’t wait to just start writing songs about women.”

More explicitly than “Lush,” though, “Valentine” is unequivocally an album about women loving women — as well as women leaving women, and women occasionally trying to numb heartbreak via dalliances with rebound women. “Sometimes I hate her just for not being you,” Jordan, now 22, admits on the slinky single “Ben Franklin,” a song that finds her feigning a blasé attitude but almost immediately folding and admitting that she’s a “sucker for the pain.” On the sharply affecting “Automate,” which lurches uneasily forward like someone fumbling for a light switch, Jordan paints a piercing picture with a few simple words: “Red lips, dark room, I pretend it’s you, but she kissed like she meant it.”

Jordan’s voice has changed since “Lush”; it’s become hoarse, feral and absolutely heartbreaking. She often sounds like she’s just been crying, or maybe still is, and “Valentine” gives off the overwhelming effect that you are listening to someone moving through feelings in real time — that the album itself is an immediate expression of raw, unprocessed grief.

Jordan and her co-producer Brad Cook punch up the drama in these arrangements while still reveling in unvarnished textures. Much of Jordan’s sensibility — her penchant for murky effects pedals; her unconventional sense of melody — comes from the world of ’90s indie rock. She’s often called Liz Phair’s heir apparent, but a more direct influence seems to be Mary Timony, the sonically adventurous solo artist and one-time leader of the band Helium.

At one point when Jordan was growing up in Baltimore, Timony was her guitar teacher, and she seems to have inherited (and filtered through her own unique ear) Timony’s fascination with unusual chords and a certain husky grain in her voice. Jordan’s lyrics are full of unanswered questions (“Isn’t it strange how it’s just over?”), and on a song like the acoustic reverie “Light Blue” she is not afraid to augment them with chords that, too, hang in the air unresolved.

“When did you start seeing her?” Jordan asks on the breathtaking “Headlock,” a perfect distillation of the step forward that “Valentine” represents in all aspects of Jordan’s songwriting: clear, direct language and wrenching melody used in the service of vivid emotional truths. “Thought I’d see her when I died,” Jordan sings, briefly flirting with oblivion, “Filled the bath up with warm water, nothing on the other side.”

By the final song, “Mia,” though, Jordan will have begged, bargained, languished and at last begun to accept reality. “Gotta grow up now, no I can’t keep holding on to you anymore,” she sings, while a subtle string arrangement creeps in like the first glimmers of sunlight after a storm. Jordan’s ability to feel everything so deeply is what previously made her feel like she was dying, but by the end of the album she shows it’s also what has given her the strength to move on with her life. As “Valentine” so poignantly illustrates, the surest route out of a terrible feeling is straight through its bleeding heart.