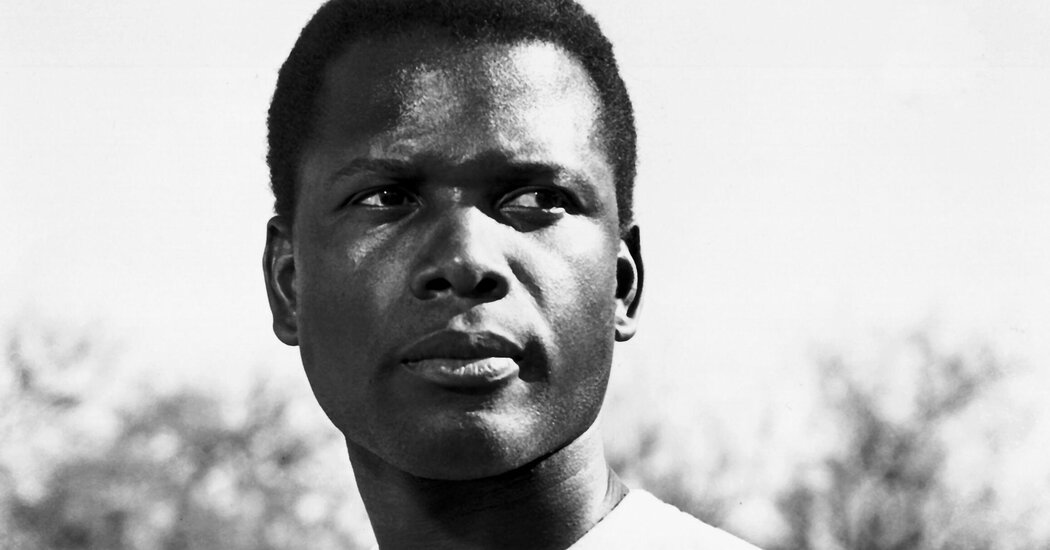 Who did more with less? Of whom was less expected as much as more? Who had more eyes and more daggers, more hopes and fears and intentions aimed his way, at his person, his skill and, by extension, his people? Race shouldn’t matter here. But it must, since Hollywood made his race the matter. Movie after movie insisted he be the Black man for white America, which he was fine with, of course. He was Black. But the radical shock of Sidney Poitier was the stress his stardom placed on “man.” Human.

Let’s say Mr. Poitier had a good 20-year run as a star, from 1958, when “The Defiant Ones” came out, to 1978, when the last of his hit trilogy with Bill Cosby left movie theaters. He was making just about a movie a year, many of them unmemorable. On one hand, that’s stardom. On the other: Mr. Poitier achieved his greatness partially as a matter of “despite.” He achieved all he did despite knowing what he couldn’t do. I mean, he could’ve done it — could’ve played Cool Hand Luke, could’ve been the Graduate, could’ve done “Bullitt,” could have been Butch Cassidy and the Sundance Kid. There are maybe a dozen roles, capstones, that nobody would have offered to Mr. Poitier because he Wouldn’t Have Been Right for the Part.

I believe with all my heart that Mr. Poitier was as crucial in the odyssey of freedom and equality for Black Americans — for personhood — as Frederick Douglass and Harriet Tubman, as Martin Luther King Jr. A clear descendant of Douglass’s rhetorical brilliance, he spoke the words of white people but from his own mouth. His projected image begot what is now a galaxy of other Black actors, doing acting as diverse and tiered as a shopping mall.

Black artists in this country bear the curious, hilarious burden of history. Their work has to advance; to answer, to question, sit with, and not know. To take on, to risk. To do not only more, but often the most. It must also counteract and dispel; it must undo. Mr. Poitier was American art’s great undoer.

In the movies, Black characters were jolly statuary — hoisting luggage, serving food, tending children — meant to decorate a white American’s dream. Acting could be a carceral affair. Mr. Poitier arrived at the start of the civil rights movement, in time to spring the Black image from the prison of the antebellum and minstrelsy eras. He was scarcely the first to try. He just led more people farther down the road than any other artist. Of course, what ensued instead was complicated: a kind of prisoner swap.

This undoing business is tricky. The undoer must be both historic and a vessel of history. So Mr. Poitier was accused of being all kinds of Uncle Tom, because the task of undoing has tended to require collaboration with white people. It’s what they did or what was carried out in their name that needs to be undone. The collaborative act opened all parties to the opprobrium of their respective people. On Sept. 10, 1967, at Mr. Poitier’s apogee, this newspaper ran a scathing piece by Clifford Mason that asked, “Why Does White America Love Poitier So?”

Mr. Poitier’s very best friend was Harry Belafonte; even he had his concerns. “Sidney radiated a truly saintly calm and dignity,” Mr. Belafonte wrote in his memoir, “My Song.” “I didn’t want to tone down my sexuality, either. Sidney did that in every role he took. I don’t want to put the full rap on race. Sidney is a wonderful actor, and he mesmerized audiences with all his performances. But he knows as well as I do that these nuances were fundamental to his success.” That saintliness was the exquisitely bitter joke of John Guare’s “Six Degrees of Separation” — that a sure way for a con man to enter the hearts and homes of Manhattan’s white elite was to pose as the preppy son of Mr. Poitier, the father of four daughters.

Mr. Poitier’s gallery of highly educated, gleamingly polished, seductively agreeable characters had to be fit for entrance into white people’s homes but also attractive to Black people worried that he might think himself too good for dinner at theirs. That was as much a conundrum in 1958 as it was, say, half a century later when the country conducted an experiment to discover the measurement of Blackness appropriate for a president. Like Barack Obama, Mr. Poitier was punctual, culturally. He became the star he did because he was the star we desperately needed him to be. And even then he couldn’t please us all.

One is left to imagine how much greater the greatest could’ve been. No romances — none where the woman wasn’t literally blind, as she was in “A Patch of Blue,” none in which the trouble wasn’t the romance itself, where the romance wasn’t in trouble because of the fact of him. Nothing with Audrey Hepburn or Grace Kelly, Marilyn Monroe or Doris Day. Nobody dared use him in a love story to make earlier stars of Cicely Tyson or Ruby Dee, or a bigger one of Diahann Carroll, the love of his offscreen life. The movie romance he and Ms. Carroll did have, in “Paris Blues” from 1961, was a timeshare with Paul Newman and Joanne Woodward. Mr. Poitier was denied opportunities we’ll never be able to prove he was denied.

We can reasonably deduce, however, that he could’ve been bigger than he was. But he also managed to be as big as he became, which, in itself, is a wow. He had the best 1967 and ’68 of anybody. Three box-office smashes — “To Sir, With Love,” “In the Heat of the Night,” “Guess Who’s Coming to Dinner,” two of them competing best picture Oscar nominees (“Heat” won), Oscars for two of his co-stars.

Years ago, when the movies were basically still the country’s dominant art form, the American Film Institute released a countdown of the greatest stars of all time who made their debut before or in 1950. No. 1 in the male category was not Sidney Poitier, who arrived right at the list’s deadline. (That was Humphrey Bogart.) He wasn’t even No. 10. (Charlie Chaplin.) Nope, the Great American Movie Star was down at No. 22, just ahead of Robert Mitchum and behind three of the Marx Brothers.

But let’s apply some cynical pressure here. What do the people who got Poitier to 22 on that greatest actors list believe warranted his being even that high? There were 49 other people on it, evenly split between women and men. He’s the only nonwhite person. Even now, I suspect, Mr. Poitier’s legacy really has been reduced to his firstness. And that’s not nothing, either. He was summoned to symbolize Black America, single-handedly; to receive his white peers’ congratulations when they make him the first Black man to accept their Oscar (for building a church for German nuns in “Lilies of the Field”). And so the milestone is the achievement.

Mr. Poitier’s firstness is what puts him at the tippy top of all the home pages and front pages the day he dies. But what does he leave? Well — well! — that’s what makes him the greatest. Like every significant star before him — Clark Gable, Bette Davis, John Wayne, Humphrey Bogart, Mae West — Poitier made being in a movie look to the manner born. His least inspired line readings retain a spark of passion. Each word — words that could sometimes constitute the dregs of the English language (“the agonies, the torments, the humiliations … all these are the natural elements from which the key is forged,” spake Mr. Poitier, as the mixed-up enslaved insurrectionist Rau-Ru, in 1957’s unspeakable “Band of Angels”) — seemed to have originated in his head.

His most daring work turned out to be a sustained performance of himself. I know: This is a star’s only job. But Mr. Poitier’s was a self he forged, sculpted and refined, a self that, though it bore only the perfume of an island upbringing, carried a note of exotic mystery. Even when they dressed him like an outer-space pimp in “The Long Ships,” he was no mere persona of a movie Negro, like the ancestral caricatures who made him necessary and the carload of badasses who thrived in his wake — the Sweetbacks, Shafts and Priests, the Hammers and Dolemites. Nobody had experienced anybody like him before. Just listen to the meter of his lilt, the melody of it. When he spoke, you heard a symphony. His placelessness gave him the same advantageous allure of other placeless stars.

The acting he did required every inch of his long body — for exuberance, rapture, caution, solemnity and rage. In no conventional sense has a Sidney Poitier character ever danced with any success. (When he cuts a rug, you should keep a tourniquet handy.) Yet all of his characters proceed with grace and poise. Some of that is training; he was our most famous Black Method actor. The rest is simply him. The clenched fists and mid-promenade pivots, the column-hugging and thrown-open arms — it was all his own ballet. These were signature moves, a star making exclamatory punctuation of his being, carrying himself in cursive. The signature of what this country has always sworn it aspires to be.