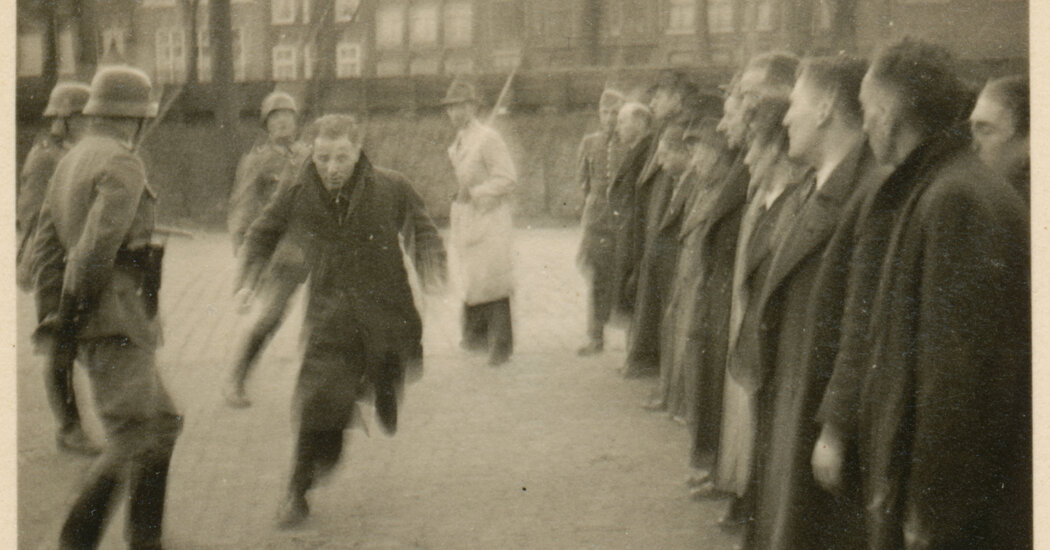 AMSTERDAM — In February 1941, nine months after the German Reich invaded and occupied the Netherlands, the first pogroms began on Dutch soil. Local Nazi party members posted bills in shop and cafe windows that read “Jews Not Wanted.” Then they trolled the Jewish Quarter, breaking windows and shouting jeers.

Young Jewish men and boys prepared to protect their neighborhood. When Dutch Nazis returned a few days later, the Jews fought back. Street fights went on for days resulting in many casualties, including the death of one Dutch Nazi, Hendrik Koot.

In retaliation, the Green Police — German Nazi officers in long green coats and high boots — randomly grabbed about 400 Jewish men off the streets during a two-day sweep, ultimately forcing them into trucks and driving off into the night.

Most of the men were never heard from again. For more than 80 years, no one knew precisely what had happened to them, or even how many men had been taken away.

But a Dutch historian, Wally de Lang, made it her mission in 2017 to discover the fates of each and every one of the men taken that day.

“It was impossible for me to comprehend that 400 people of this town just disappeared, without anyone knowing who they were,” said de Lang, who has spent several decades writing about Jewish history in the Netherlands.

Her findings, published in a Dutch book last year, are now being presented as a commemorative exhibition, “The Raids of Feb. 22 and 23, 1941,” at Amsterdam’s city archive, the Stadsarchief, until May 8.

“Until now, the facts of the razzias were known, but the fate of the men who were rounded up were not,” said Ben Braber, an expert in Dutch Jewish resistance during the Holocaust, based at the University of Glasgow.

The February razzias, or roundups, were a prelude to much worse to come. These men were only the first of some 102,000 Jews from the Netherlands to be murdered during the Holocaust, a figure that represents 75 percent of the Dutch Jewish population.

De Lang found that 151 of the 400 men were among the early Jewish victims of Nazi gassing experiments at Hartheim Castle, in Austria, where National Socialist doctors and administrators tested techniques for killing people on a mass scale.

The British historian Mary Fulbrook, a professor of German history at University College London, said that the techniques used at Hartheim and other “euthanasia centers” would later be employed at extermination camps like Treblinka, Sobibor and Auschwitz.

The deaths of the men who had been seized during the raids in Amsterdam, Fulbrook said, came at the “crucial stage” in the Nazi genocidal program, when National Socialist leaders made the transition from “killing some Jews to killing all Jews.”

De Lang said she started her research mainly to fill a gap in the historical record. The February razzias, she said, had been the subject of surprisingly little scholarly attention, especially when compared with the February strike, a general walkout by hundreds of thousands of Dutch workers, staged only days later in reaction to the persecution of the Jews.

That event, recognized as the largest European public protest on behalf of the Jews during World War II, has been commemorated every year since 1946 with a ceremony in one of the squares where the razzias took place. The ceremonies celebrate non-Jewish resistance and solidarity. The razzias present a different narrative, of Jews recognizing the burgeoning threat they faced and acting in their own defense.

“So much attention has been paid to the history of the February strike, but this was the precursor to that,” she said.

De Lang could find no single list of all of the names of the men picked up on Feb. 22 and 23, so she compiled her own from several sources. She was able to put together 390 biographies, each of which has been added to a new database.

For the most part, she found, the men were simply in the wrong place at the wrong time. One was returning from a birthday celebration, while another had gone out for groceries. Three brothers had gone together to pick up their unemployment checks. A few were on their way home from the theater.

The men were initially driven to Schoorl military camp, in the dunes of the Dutch coast. At that point, 13 were sent home because they were suspected of having tuberculosis. The rest were deported to Buchenwald concentration camp in Germany, where 47 died in the next two months. The rest, 341 men, were transported to Mauthausen in Austria, where most of them were put to work as slave laborers in a stone quarry.

Many of the rest were killed, in alphabetical order, in September 1941, she found, when, too ill or injured to work, they were driven to Schloss Hartheim, the Austrian castle, where the Nazis had already been poisoning disabled and mentally ill people with carbon monoxide gas.

Of the 390 men that de Lang tracked, only two survived the war.

Those rounded up in the Amsterdam raids were mostly men in their 30s or younger, de Lang found, and the vast majority were poor and working class, employed as market hawkers, rag pickers, and scrap metal salesmen.

Many of the men had recently married and started families. De Lang found that they had collectively left behind 24 pregnant partners. Frantic for news about their loved ones, these women were given scant information from the Dutch or German authorities. The few death notices that trickled in identified unlikely causes, like ulcerative colitis and general sepsis, and even reproductive system diseases that typically strike women, not men.

Vogelina Kroonenberg, 18 years old at the time, knew only that her husband, Simon Groen, had been sent to Mauthausen. Simon and Vogelina had been married for just three weeks before he was picked up in the February raids, and she was pregnant with their first child, Rosette. The baby was born in August.

“It’s going well with our child,” she wrote to him on Sept. 11. “Every day, we go out walking with either your mother or mine. I hope that you will see your daughter very soon.”

The letter was returned unopened. Groen had been killed at Schloss Hartheim on Sept. 8. Eventually a letter arrived with news that he had died of multiple sclerosis.

Vogelina never learned of his fate. Eager to be reunited with him, she went to Westerbork transit camp when ordered to do so, hoping she’d see him in Mauthausen. Instead, she was deported to Auschwitz and murdered there. Baby Rosette had stayed behind with her grandfather, who placed her in hiding with a family in Blaricum.

The baby’s location was betrayed, however, and she was deported to the concentration camps Bergen-Belsen and Theresienstadt. She survived. After the war she went back to the family in Blaricum, who raised her on a quiet fruit farm. Only her grandfather survived.

“I don’t remember anything about my mother, my father, my grandmother,” said Rosette van Engeland-Groen, 80, in a telephone interview. “I was brought as a baby to my foster parents. I was in concentration camps, but I don’t know anything about it. I think I closed my mind to it.”

Growing up, she learned very little about her family. “I couldn’t ask my grandfather, because when I asked him something, he cried, so I didn’t ask a lot,” she said. “And nobody else could tell me.”

She learned many of the specifics for the first time at the new exhibition, she said, but it was all still very hard to process.

“It’s a very strange feeling,” she said. “You know you belong to them but you have no grip on it. You can’t reach them anymore.”