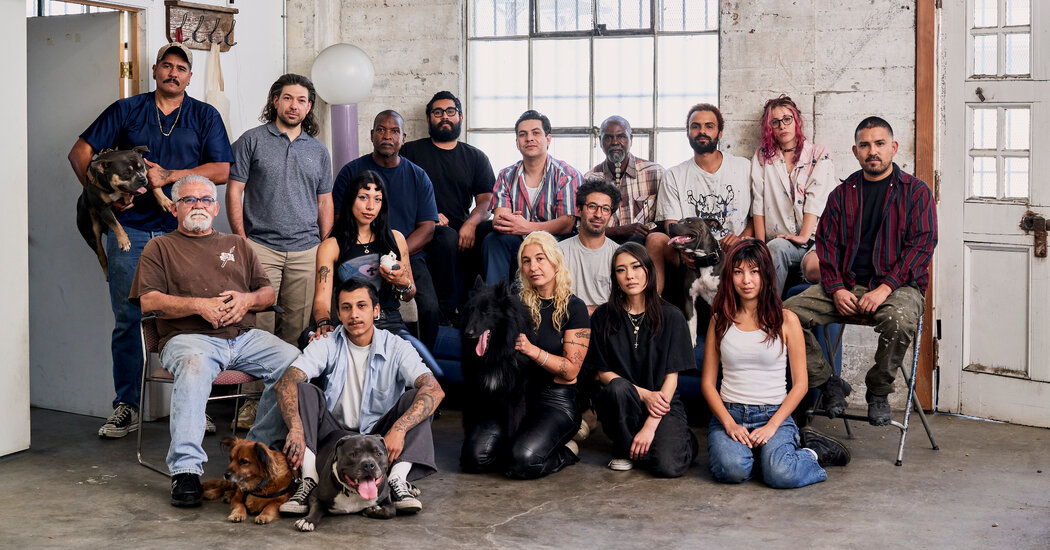 LOS ANGELES — Their dogs play together among the canvases, drop cloths and spray cans. They crowd into cars on road trips to each other’s far-flung exhibitions. They sometimes share paint supplies.

In an art world that is often competitive, the painters who have come to share a studio in the Boyle Heights neighborhood represent an unusual model of how artists can nurture and support one another.

“Before I didn’t feel connected with other artists,” said Alfonso Gonzalez Jr., one of the studio’s tenants. “Then I met these guys. They get it.”

Over the last couple of years, Gonzalez, Mario Ayala, Devin Reynolds, Rafa Esparza and Sonya Sombreuil and others — mostly in their 30s — have found their way to a nondescript warehouse space here on South Anderson Street near the Los Angeles River.

Their studio in Boyle Heights, which has become a destination for galleries (and therefore complaints about gentrification), in part reflects the energy coming from a new generation of Mexican-American artists.

“Something big is happening in the culture that’s now coming up to the surface,” said the gallerist Jeffrey Deitch, who has shown many of the studio’s artists. “L.A. is majority Latino so it’s going to be more and more of an influence.”

Though they each rent work spaces of varying sizes and have different painting styles, the artists move easily in and out of each other’s studios, chatting, offering advice when solicited.

“It helps with all the stress, just being able to share space,” said Reynolds, whose dreamy mural-like paintings combine images and text. “I’m grateful to be here now with so many people pushing the envelope with their painting.”

Several of the artists were recently featured in Deitch’s acclaimed “Shattered Glass” show in Los Angeles as well as in the recent “Made in L.A. 2020” biennial at the Hammer and the Huntington museums.

For “Made in L.A.,” for example, Ayala focused on the underground magazine, “Teen Angels,” which documented cholo street culture in the late 20th century, featuring artworks, photographs and essays by gang-affiliated or incarcerated Chicanos.

“Shattered Glass” included two Ayala paintings on the rear of pickup trucks, images that featured a flying saucer, a cactus, dice and the barrel of a gun.

“I don’t just look for individual talent — I look for communities of artists,” said Deitch, a longtime gallerist. “If you go back to the beginning of Modernism and beyond, almost always the artistic innovators are part of communities — from Matisse, Picasso and Braque to the Surrealists to the Abstract Expressionists.

“It’s something way beyond a conventional studio, where it’s just an artist working on paintings,” Deitch continued. “They’re walking through each other’s studios, they’re promoting each other.”

The artists have in common sign painting, graffiti, airbrush techniques, truck stops and lowrider car culture. They share an interest in music, fashion and skateboarding. They paint their families, friends and neighborhoods — the people and places that shaped them.

Ayala’s father is a truck driver. Gonzalez’s father is a billboard painter. Reynolds’s father worked on a fishing boat. That heritage shows up repeatedly in their work.

Gonzalez has painted beauty salons and barber shops. “I see these as landscapes,” he said. “I’m interested in how community changes. I wanted to paint people who felt familiar.”

Gonzalez said he got tired of sign painting and started learning about artists on YouTube, becoming particularly inspired by Cy Twombly and Ed Ruscha. “A Rothko would remind me of a big graffiti buff mark,” he said. “As long as I could pay my rent and art supplies, I made art.”

In 2020, Gonzalez joined the Boyle Heights studio, where he said he pays about $2,000 a month, a fairly reasonable rent. “Everything I’ve done I put back into this,” he said.

Rafa Esparza, whose work on handmade adobe bricks — a skill he learned from his father — was recently featured at Mass MOCA, has to pass through Ayala’s studio to get to his own — “daily check-ins,” he said, that allow for “a unique conversation about our work.”

Some in the group have received formal art education, including Ayala, who graduated from the San Francisco Art Institute in 2014 and attended the Skowhegan School of Painting and Sculpture the same year, and Reynolds, who earned his bachelor’s degree in architecture at Tulane University in 2017.

“He’s creating this fusion between traditional and industrial painting techniques,” Deitch said, “between old masters and the automobile guys.”

Some of the artists have gallery representation. (Matthew Brown recently took on Gonzalez; Kordansky Gallery has taken on Ayala.)

“Alfonso notices aspects of the L.A. landscape that we often overlook,” Brown said, “and uses them to build his own visual language that feels at once both familiar and completely new.”

“I see a lot of people’s markets skyrocket,” Gonzalez said. “I’m not concerned about the money, I’m concerned about where it’s placed and being able to do this for the rest of my life.”

They go out of their way to get to one another’s exhibitions; they traveled to Ayala’s show with Henry Gunderson at Ever Gold [Projects] gallery in San Francisco last summer and plan to attend Ayala’s show at Deitch’s New York gallery in September.

For Made in L.A., Sombreuil created a gallery, performance space, music venue, screening room and storefront featuring her own limited-edition merchandise. (She runs the fashion label Come Tees.) She said the Boyle Heights studio has helped her reconnect to her roots as an artist. “It’s a cross-pollination of ideas,” Sombreuil said, “and a stream of traffic that benefits everybody.”

That stream of traffic includes Sombreuil’s brother, Noah, a furniture maker, and Fulton Leroy Washington (known as Mr. Wash), who began to paint while serving time for a nonviolent drug offense and was also featured in the Hammer biennial, as well as in “Shattered Glass.” Working in the studio has enabled Washington to prepare a large canvas that he could not have fit in his apartment work space and to connect with other artists.

“Being in prison, I haven’t had the experience of being around that much talent,” he said. “Art complements art. It is really inspiring.”

The camaraderie comes through on their canvases. There is an earnest humanity in what they’re making, unlike the wink-wink commentary of artists like Andy Warhol, Jeff Koons and Marcel Duchamp. “There is no irony in this work,” Deitch said. “It represents a very important shift in how a younger generation is approaching art.