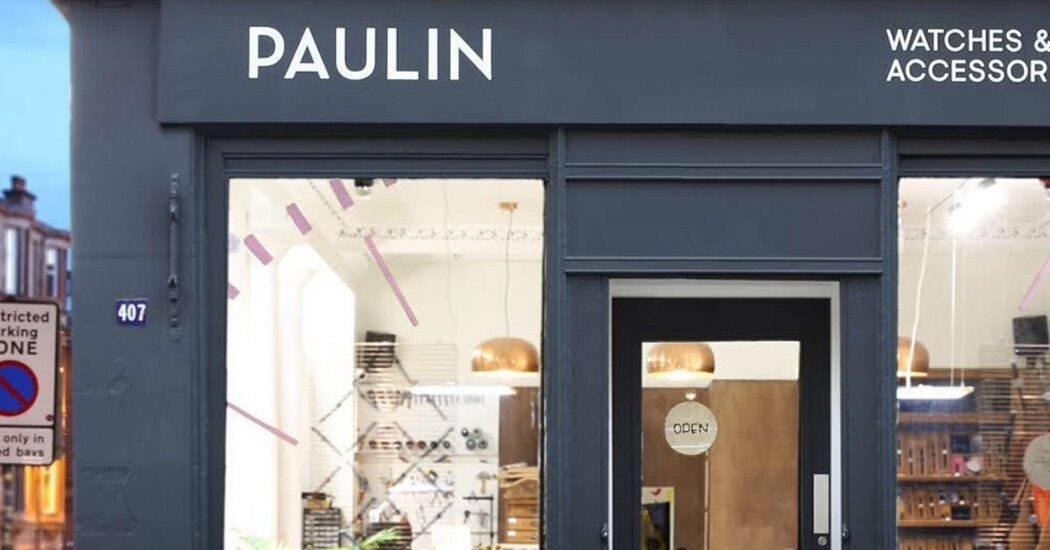 Over the last decade or so, a handful of young Scottish brands have focused on something that typically is associated more with Geneva than Glasgow: creatively designed watches.

Scotland has a long tradition of innovative entrepreneurs, including the celebrated architect Charles Rennie Mackintosh and John Logie Baird, who achieved many breakthroughs in television technology.

“Scotland has always been a nation of creativity,” said David Sharp, head of RedBar UK and Ireland, a watch collectors’ organization. “It’s that unusual blend of creativity which has got the science and research aspect and the artistic aspect of it.”

Also, cities like Glasgow can be more conducive to starting a creative business than a city like London. “It’s a fantastic place to be a designer,” said Ross Baynham, co-founder of Instrmnt Applied Design, a Glasgow-based brand that makes watches and other items. “Rents are cheaper. There’s a community that very much supports each other, whereas in London at times, completely understandably, it’s a little bit more cutthroat.”

Scotland’s watch brands vary in price — a 28-millimeter quartz Geo Mini by Paulin Watches is 140 pounds ($192), for example, while some of anOrdain’s enameled timepieces cost more than 10 times as much — but tend to focus on value along with design.

“You get a lot of bang per buck from these brands,” said Rikki Daman, co-founder of the podcast “Scottish Watches,” which Mr. Sharp co-hosts. “Maybe it’s because Scottish people are traditionally known for being tight with their money.”

AnOrdain’s classically styled mechanical watches have an eye-catching twist: vitreous enamel dials, frequently in vivid shades of colors like purple and teal. “The idea was to use this very traditional craft and then combine it with the kind of work that’s being done in art schools at the moment,” said Lewis Heath, the brand’s founder.

The intense color saturation is the key to enamel’s appeal, Mr. Heath noted. “There’s nothing else that renders color with that vibrancy, so when you start to see what’s possible, then it’s very addictive,” he said. The brand has developed its own technique for fumé enamel, intentionally ensuring that the dials do not have uniform finishes. The process particularly suits colors like pine green and dark gray.

About 20 years ago, as a teenager on his family’s annual summer trip to Scotland, Mr. Heath began thinking about starting a watch brand. (The company’s name is a take on Loch an Ordain, a lake near his family’s vacation spot.) After he earned a degree in architecture from Edinburgh College of Art in 2008, Mr. Heath, who is Welsh, co-founded a headphone company, but then moved on to create anOrdain.

The brand — which introduced its first watch, Model 1, in 2018 — is based in a former carpet factory in Glasgow’s East End neighborhood. The timepieces are sold online, as well as at several boutiques, like the local watch and jewelry retailer James Porter & Son. “Our customers do like the idea that they’re made in limited numbers, so you’re not going to see one on everybody’s wrist,” said Simon Porter, the store’s managing director.

Family is integral to Paulin Watches. The brand was founded by three Scottish sisters in 2013, inspired in part by a great-grandfather who was an artist. And one of those sisters, Charlotte Paulin, is married to Mr. Heath from anOrdain.

Far from being a competition, the connection with anOrdain seems to have come in handy. “We have our aesthetic, but certainly we needed a helping hand with finding manufacturers and all of that stuff, and setting up a business,” said Eleanor Paulin, a creative director for the brand. The companies also share some staff, like Imogen Ayres, who designs custom fonts.

Paulin’s timepieces are more casual and playful than anOrdain’s — and considerably less expensive with more reasonably priced movements and no lavish enamel. Its streamlined Commuter watch, for example, is £180. “We want to make watches that our friends can buy,” Eleanor Paulin said. “We didn’t want to make them too expensive, plus what we’re doing isn’t super high-end.”

There are two Paulin Watches boutiques: a flagship in Glasgow’s bustling West End and a location in the Stockbridge area of Edinburgh, a half-hour walk northwest of Edinburgh Castle.

Since August, the MoMA Design Store has been selling the Neo, an automatic watch that was a joint venture with anOrdain. The 38-millimeter timepiece has numbers in a specially designed font called Wim, in honor of the Dutch typographer Wim Crouwel, that looks both vintage and a bit industrial. “This piece really does highlight what is special about both those brands,” said Chay Costello, the store’s associate director of merchandising. She said the watch, priced at $550, had quickly outsold MoMA’s expectations.

Paulin has expanded over the last several years to offer items like umbrellas printed with bright illustrations by a local artist, Katie Forbes. “If you want to keep buying into the brand, then it’s nice to have options like a clock, an umbrella and leather goods,” Ms. Paulin said.

It is based in a converted solar-powered barn on a farm in Kinross, about 50 miles northeast of Glasgow, but Marloe Watch Company was founded near the English town of Marlow — hence the name, but intentionally spelled differently. Its co-founder Oliver Goffe was raised nearby.

The move two years ago to rural Kinross — the hometown of its other founder, Gordon Fraser — seems to suit the brand. “We really don’t get involved with the watch industry, mainly because we see ourselves a little bit more design-led,” Mr. Goffe said. “We do try and just do our own thing. We don’t really take influence from any of the watch brands that are out there.”

The inspiration behind the brand’s mechanical watches, Mr. Goffe said, comes from subjects such as aviation. It recently introduced Centenary Edition, a clean-lined timepiece with a bluebird on its dial to commemorate the 100th birthday of Donald Campbell, who broke several land-speed racing records in vehicles with Bluebird in their names. This month, it is planning to release the Pacific, a homage to the start of the jet age. Priced at £1,195, it will be the brand’s most expensive watch, but Mr. Goffe said the price would be much less than a comparable timepiece from a larger brand. “Just because it’s high spec, it doesn’t mean we should ramp the price up ridiculously,” he said.

Mr. Goffe, who handled marketing for a news website before the watch brand started in 2015, said he was also inspired by childhood memories of his father winding a mechanical watch at the breakfast table, as well as his frustration with the poor quality of a quartz watch that he owned. “I don’t know a lot about watches, but what I do believe in is value for money,” he said.

Marloe’s timepieces, which are sold in limited editions, seem to be resonating with buyers. Mr. Goffe said the brand’s 2020 sales doubled year-over-year, to £1 million. And 2021 sales, he added, appear likely to increase by an additional 50 percent.

Instrmnt Applied Design’s understated watches do not have bold motifs or labels. “The design style for all of our watches is to completely disregard things like logos and really design backwards,” said Mr. Baynham, a co-founder, who added that its aesthetic involved removing “any unnecessary features that we felt were only there for a branding exercise or to make the product seem more fancy.”

Although the brand has created quite a few items, like umbrellas and a bicycle, its first product was the spare Everyday Watch, a 40-millimeter Swiss quartz timepiece that now is priced at £180. When that timepiece was introduced, Instrmnt was based in the basement of the Victorian building in Glasgow where Mr. Baynham and the brand’s co-founder Pete Sunderland were living at the time. It now has a store and office in the centrally located Merchant City neighborhood.

This month, Instrmnt plans to unveil its first item of clothing: a £180 unisex chore jacket, cut by hand from recycled heavyweight cotton. It also recently introduced its first timepiece with a solar-powered movement: the Field Watch, a limited-edition 38-millimeter timepiece with a World War II-inspired design, priced at £220.

Mr. Baynham said the new timepiece reflected Instrmnt’s prioritization of sustainability, which includes selling its goods in biodegradable, recycled plastic-free containers. “We wanted to start bringing that into our products as well, rather than simply our packaging,” he said. “The Field Watches really are a case study into maybe bringing that technology into our full range.”