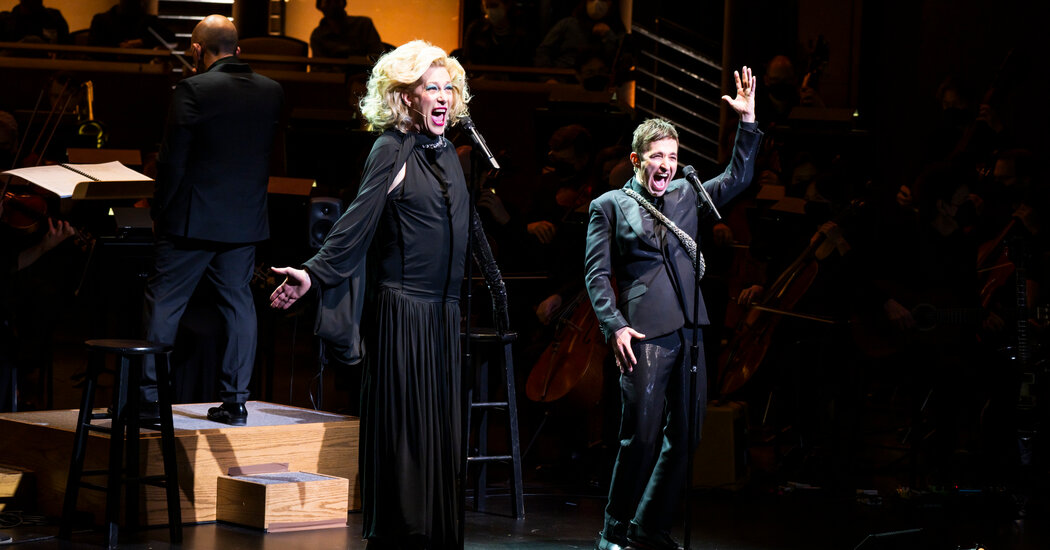 It’s not like the New York Philharmonic hasn’t been queer before. I can’t have been the only boy for whom Jessye Norman’s hair, when she sang Brünnhilde’s Immolation Scene with the orchestra on national television in 1995, was a turning point. The ensemble backed Mariah Carey in Central Park, and Elaine Stritch for Sondheim’s 80th. It once paired Lou Harrison and Bruckner.

But it’s safe to say it hasn’t presented anything quite like Anthony Roth Costanzo and Justin Vivian Bond’s Philharmonic debut as a duo on Thursday at the Rose Theater at Jazz at Lincoln Center. Performing a rich helping of their recent show “Only an Octave Apart,” they cracked jokes about G spots and traveling for sex, mashed up Purcell’s Dido with Dido’s “White Flag,” layered Philip Glass over the Bangles, and generally camped up the joint.

When “Only an Octave Apart” played at St. Ann’s Warehouse in Brooklyn last fall, it was a riff on Beverly Sills and Carol Burnett’s high-low 1976 special of the same name, bringing together Costanzo, an operatic countertenor, and Bond, the gleefully savage cabaret diva. I went in with a little trepidation — a fan of both performers, but not quite sure whether the experiment would go off. Would it be too stiff? Too silly? Too talky? Too self-indulgent?

By turns hilarious and tender — those dual Didos are very much not played for laughs — the show was a small miracle of careful craft and improvisatory looseness, of arch personae and moving sincerity. Costanzo was a superb, well, straight man to Bond’s battiness, and their voices — one slender and pure, the other husky and vibrato-heavy — improbably blended. The return to live performance after a year and a half of lockdowns only increased the poignancy and delight of their obvious mutual love and respect. It was a confection that nourished.

It still is. Alongside the release of an album version, the show is an apt opener for the festival “Authentic Selves: The Beauty Within,” organized by Costanzo as part of his Philharmonic residency. Focused on marginalized identities and (forgive the self-helpism) being yourself, the festival’s programs include a pair of premieres sung by Costanzo, as well as a rare countertenor take on Berlioz’s song cycle “Les Nuits d’Été.”

On Thursday I missed Zack Winokur’s daffy yet elegant full staging of “Only an Octave Apart,” especially Jonathan Anderson’s delirious gowns. But the 90-minute show compressed nicely into a 50-minute concert half, the union between classical and cabaret smoothed by Nico Muhly’s lush yet subtle orchestrations.

Some moody Nelson Riddle-style string arrangements — like the scoring of a Douglas Sirk melodrama — nodded to what came before intermission: the premiere of Joel Thompson’s “The Places We Leave.” Setting a new text by the poet Tracy K. Smith, Thompson also reveled in sumptuous, worried strings, and gave Costanzo mellow, narrative vocal lines that surge into piercing climaxes. There was even a patch of exhausting Handelian coloratura, a wink at the text’s account of a lover who “left me breathless,” and at a Costanzo specialty. (He appears in “Rodelinda” at the Metropolitan Opera in March.)

The concert opened with Joan Tower’s stout “Fanfare for the Uncommon Woman” No. 1, and also included Prokofiev’s Symphony No. 1, “Classical.” What was this chestnut doing here? Particularly as conducted by Jaap van Zweden, the Philharmonic’s music director — who was otherwise a sensitive leader — with his all-too-characteristic clenched, unwitty approach to the standard repertory.

But an aspect of the choice resonated. Like “Only an Octave Apart,” Prokofiev’s First was created in a time of crisis, the violence of the February Revolution in Russia, but has little hint of that darkness in a work of sparkling energy and grace.

Is making joyful music in grim times escapist, even reactionary? Sometimes the opposite: The “Classical” looked, as does “Only an Octave Apart,” to the past with a fresh spirit, a kind of progressive nostalgia. And like Costanzo and Bond in their show, Prokofiev used the work not to rest on his laurels but to spur himself to develop; the symphony was the first big piece he wrote without leaning on his beloved piano as a composition tool. It made his future possible.

As unlikely yet satisfying a pairing as Costanzo and Bond, then, these two works — bridging an intermission and a century — are a reminder that what emerges and survives from our distressing era may not be what we expect. All we can do is give artists the space to create, and keep our ears open.

This program continues through Saturday at the Rose Theater at Jazz at Lincoln Center, Manhattan; nyphil.org.

How airline ticket scalpers took over the Chinese travel market