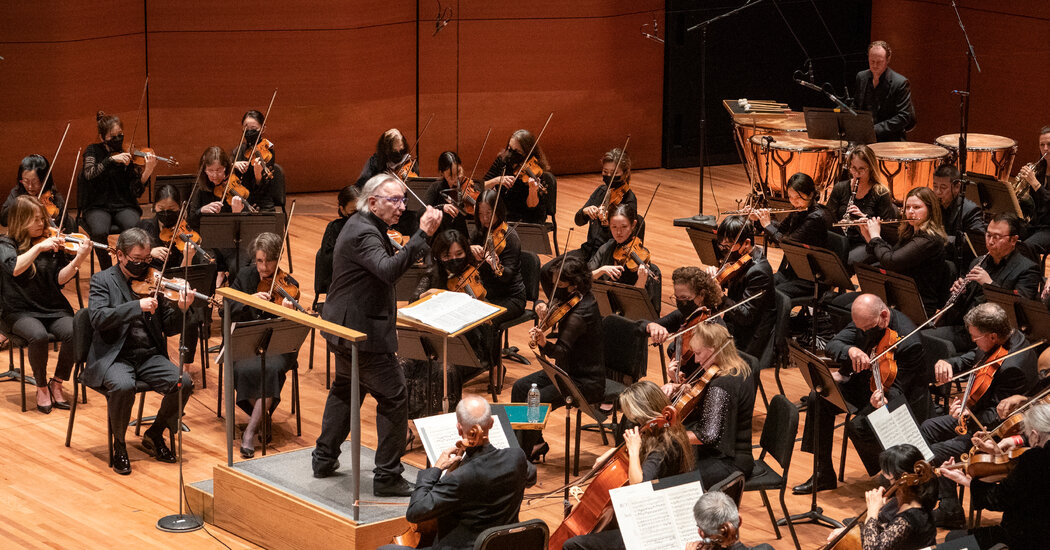 Berg drew upon 12-tone techniques here, though the first movement deftly folds in musical evocations of a young woman’s youth in Vienna, with bits of waltzes and folk songs. From the start, Shaham (with glowing sound and, when called for, spiky intensity) and Thomas (drawing rich, lucid sonorities from the orchestra) brought out the lyrical elements that run through the score.

In the second movement, which begins with wrenching expressions of grief and anger, Shaham dispatched the tangles of skittish lines and blocks of heaving chords with eerily controlled vehemence. The strains of “Es ist genug,” one of Bach’s most harmonically daring chorales, gradually enter as a gesture of consolation. Yet this performance remained alert to the unresolved, searching strands that linger until the end.

During the bows that followed, Thomas interrupted the applause. “I forced Gil to learn this piece,” he told the audience, smiling. “Good idea, wasn’t it?”

After intermission — the Philharmonic’s first this season, after a run of shorter performances — Thomas led a compelling account of Beethoven’s “Eroica” Symphony. In the first movement, rather than just going for stirring energy and grandeur, he seemed intent on bringing out the intricacies and inner textures of the music.

Perhaps overly so — though the performance gained in sweep and determination as it went on. The slow movement, a noble funeral march, was magnificent, almost Mahlerian. And the Scherzo showed that Thomas was in no slow-tempo mode: The music whisked by with fleetness and crackling rhythms. The Finale was joyous — majestic and exciting, even teasing out the touches of silliness.

At one point, between movements, Thomas unabashedly pulled up his visibly sagging pants, which elicited some good-natured laughter from the audience. He turned around and said, “Post-pandemic waistline,” prompting more laughter.

But in general he looked fit and lively. Beethoven famously scratched out the original dedication of his “Eroica” — to Napoleon — and instead titled it in honor of a nameless hero. On Thursday, that hero was Michael Tilson Thomas.

This program is repeated through Sunday at Alice Tully Hall, Manhattan; nyphil.org.