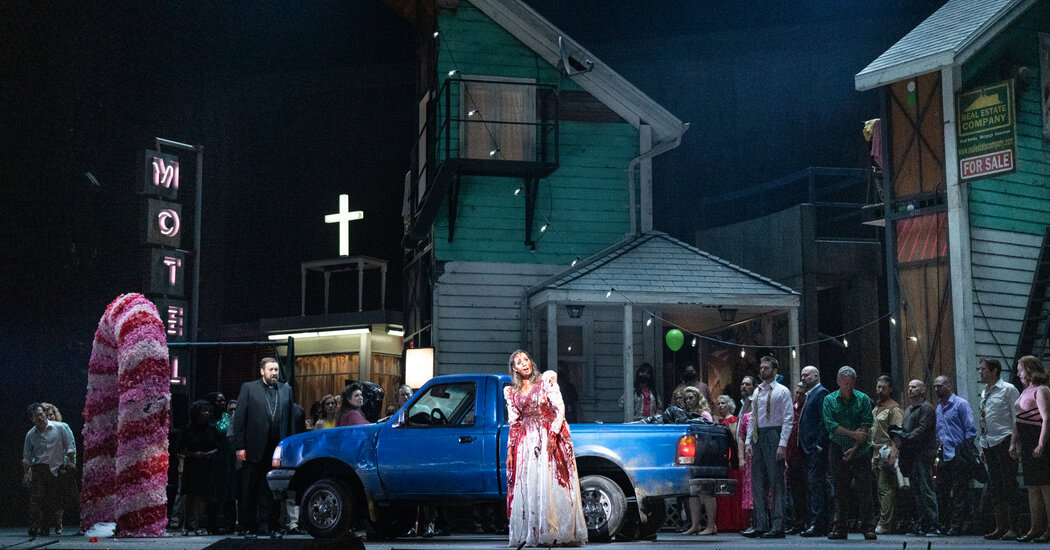 By the looks of it, there is little in common between the Metropolitan Opera’s new production of “Lucia di Lammermoor” and the one it replaces.

The old staging, which premiered in 2007 and was last revived in 2018, set Donizetti’s work — about a girl driven to murder by a forced marriage — in the late Victorian era, with sumptuous gowns and picturesque, wintry trees. The new “Lucia,” which opened on Saturday and is directed by Simon Stone, takes place in the present day, in a dying postindustrial American town, the kind whose electoral preferences have so fascinated the world over the past six or seven years.

There’s a motel, a pawnshop, liquor and drug stores, a mini-mart, a water treatment plant, some beat-up cars: “the wasteland,” as Stone has described it, “of free-market capitalism.” The costumes are less sumptuous than expressly tacky. There’s nothing Victorian, nothing picturesque. Video, much of it captured live by an onstage cameraman, often fills a screen stretching above the singers.

And yet this seemingly fresh, contemporary, multimedia take on a Romantic classic suffers from exactly the same fundamental problem as the 2007 staging, directed by Mary Zimmerman: an unwillingness to show its heroine — one of the most anguished characters in opera, whose life ends in the wake of an extended, eerie mad scene — as truly tormented.

Now, as then, there is a dull emptiness at the work’s center. While scenically intriguing and superbly sung and played — with Nadine Sierra, Javier Camarena and Artur Rucinski in excellent voice, and Riccardo Frizza conducting with fluidity, briskness and grandeur — this new “Lucia” is ultimately unaffecting and unpersuasive.

It was certainly reasonable for the Met to entrust the piece to Stone, a 37-year-old Australian director who has made something of a specialty of unsparing modern-dress depictions of desperate women in theater productions like “Yerma” and “Medea.”

And his updating makes sense on paper. “Lucia” is based on a novel that entranced the Romantics: Walter Scott’s “The Bride of Lammermoor,” set in Scotland around the turn of the 18th century. It was a time when that country’s aristocracy felt itself mortally threatened by an approaching union with England, a tumult that Scott translated into a fervid landscape of bulls charging out of forests and ghost-haunted fountains, their water reddened with blood.

Donizetti, thoroughly uninterested in the details of history, and his librettist, Salvadore Cammarano, made the novel’s political and religious conflicts almost entirely personal. There are two implacably opposed clans, which have produced a pair of star-crossed lovers, “Romeo and Juliet” style. Enrico Ashton, his fortunes in tatters, seeks to revive himself by engineering an advantageous marriage for his sister, Lucia; too bad she’s secretly betrothed herself to Edgardo Ravenswood, her family’s mortal enemy.

But this drama, however intimate, is still shaped by its social context: the distress of a class and gender that feel themselves being squeezed out. A similar dynamic, of course, is playing out in America today — so why not set the opera in America today? As Stone said in an interview on the Met’s website, “It’s always in these moments, where men feel that they and their sources of income are threatened, that misogyny and patriarchal abuses resurge.”

Yet if “Lucia” — whether in 1700, 1870 or 2022 — is about the impact of patriarchal abuses on an increasingly isolated young woman, we still need to register that impact if the opera is to have stakes and stature. She is a character, after all, who, we are told from the start, is utterly distraught, mourning her mother’s death even before the onset of worse afflictions — a character who weeps, swoons, trembles and is often, as the libretto puts it, “beside herself with misery and fear.”

Sung with confident agility and womanly fullness rather than vulnerability, Sierra’s Lucia, though, spends much of the performance oddly unperturbed and sane, even happy. Rather than the figure indicated by the libretto and score — who nervously vaults from desolate to ecstatic and back again, her repressed passions surging before she’s cowed once more into silence — in this portrayal she is so even-keeled and robust that we feel little of the patient accretion of pressure on her, the pressure that culminates in killing her arranged husband, Arturo, on their wedding night.

If that crime doesn’t feel preordained, with the grim inevitability that defines tragedy, the drama goes limp, no matter how nicely vocalized. Even the supertitles on Saturday lowered the emotional temperature: “Il pallor funesto, orrendo, che ricopre il volto mio,” as Lucia describes herself to her brother, means something far more dire than merely “the look you see on my face.”

And while there is certainly more than a whiff of toxic masculinity in Rucinski’s skeevy, face-tattooed Enrico — sung with evenness and power — and in Matthew Rose’s sonorous, ineffectual pastor Raimondo, a deeper working-out of Stone’s notion of a permeatingly anxious patriarchy would require a rougher, tougher, more ominous Edgardo. Often seeming as fixated on his enmity toward Enrico as on his love of Lucia, this character actually contributes to her burden rather than relieving it. But Camarena — a golden-voiced, long-phrased tenor, genial to his core — comes across as a harmless sweetheart. The stakes are lowered once again.

In that interview with the Met, published in February, Stone described his plan to make Lucia an opioid addict.“I wanted to portray a more complex journey than just that she was made to choose between one of two men,” he said, “and being with the wrong one turned her into a psychopathic killer.”

That all-too-simple journey, though, is the one he has presented; the addiction idea seems to have been dropped during rehearsals. But whether the cause is men, drugs, mourning, temperament or all of the above, if we don’t feel Lucia as perilously fragile from the start, her fate feels unearned — far more sudden than Donizetti and Cammarano’s gradual, carefully calibrated trajectory of degradation and madness.

The staging’s set is more evocative of circling insanity than its title character is. Stone favors near-constant motion onstage, and for this “Lucia,” Lizzie Clachan has designed a perpetually rotating and transforming little town, its structures collapsed into and overlapping one another, like a Cubist sculpture. For the final act, the buildings are broken into fragments, still turning, a sinister merry-go-round.

It’s an ambitious and impressive spectacle, yet it also contains an uncomfortable edge of too-easy tourism for a moneyed crowd at the Met to be watching a spectacle of misogyny and violence set in a trashy Middle America. The result is the opposite of the intended relevance; this opera may have been updated to our moment — eliciting some boos from traditionalists during Stone’s bow on Saturday — but the implication is that it’s not really us.

And given the hypernaturalistic trappings, some details ring false. Where in 21st-century America are people going to drive-ins, let alone to watch Bob Hope noir parodies? “WORD SON YO!!!” is the kind of graffiti concocted by someone who’s never seen graffiti. And while it makes sense that Edgardo and Lucia could not have communicated from afar in the libretto’s Scottish Highlands, the explanation for their radio silence in today’s world strains credulity, even by operatic standards.

The production’s film elements are sometimes evocative, mostly when they provide private, close-up moments, like Lucia in her bedroom, quietly making a watercolor for Edgardo. But by the end of the opera — when an elaborate black-and-white depiction of the couple’s imagined life together competes with Sierra’s mad scene — the movies are just too much.

And while she sings that scene with utter poise, accompanied by a spectral glass harmonica, Stone plops right into Grand Guignol mode, with Lucia’s wedding dress so drenched in red that — coupled with her staring creepily at the camera once it’s over — you can’t help but think of cheap slasher films. Lucia is even stalked by a horde of bloodied Arturo doubles.

It’s too little guts, too late.

Continues through May 21 at the Metropolitan Opera, Manhattan; metopera.org.