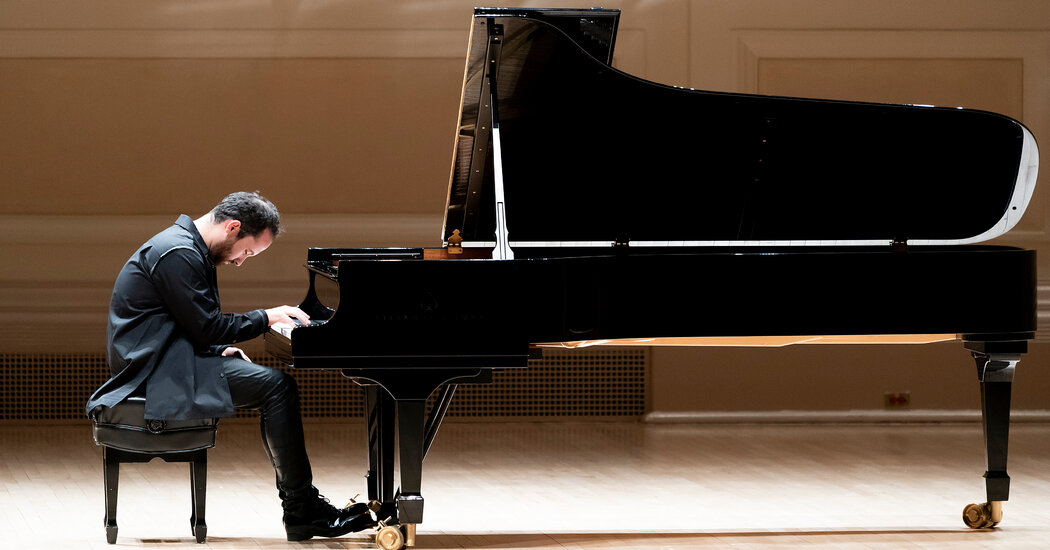 When the pianist Igor Levit streamed dozens of performances from his apartment in Berlin during the first pandemic lockdown in 2020, he wore neat but casual clothes: closefitting sweaters, hoodies over T-shirts. He was inviting you to a concert, yes, but also into his home; he offered, in milieu and music, both elevation and comfort.

Carnegie Hall, Levit made clear from the moment he walked onstage there Thursday evening, is like home for him, too.

Appearing for his first solo recital in the gilded Stern Auditorium, he came on wearing a dark, slouchy collared shirt, left unbuttoned to reveal a crew neck underneath, and black jeans. The impression, as usual with him, was of an artist who dispenses with formalities and fripperies to focus — with relaxation but also intense seriousness — on the music.

It was, also as usual for him, an elegantly organized program. A Beethoven sonata that ends in a suite of variations led into the premiere of a new set of variations by Fred Hersch. A transcription of the prelude to Wagner’s opera “Tristan und Isolde” was followed without pause by the B minor Sonata of Liszt, Wagner’s champion and eventual father-in-law — which ends, as “Tristan” does, in the key of B.

Building to a mighty climax in a grand account of Liszt’s sprawling sonata, Levit projected a kind of burning patience through the evening. His playing is changeable, but never comes across as improvisatory; there is always a sense of deliberation, sometimes in tempos but always in approach, a palpable sense that everything has been thought out. Yet the results feel confident and fiery, not merely or coolly analytical.

From its gently rocking opening — here a mistiness out of which emerged quiet clarity — Beethoven’s Sonata No. 30 in E (Op. 109) received a dreamier, and eventually more explosive, rendition than on the recording Levit released in 2013.

He has a gift for gentleness, shaping soft, tender melodies that ache without slackening. In the third movement, he built the final variation to furious, ecstatic runs. But the greatest impact came when those runs dropped out, leaving the remnants of a barely audible trill as the path back to the theme.

Hersch is best known as a jazz pianist, but he also writes poised concert works. While Levit has played some of his short pieces, this new Variations on a Folk Song is substantial, a bit more than 20 minutes long.

The theme here is the plaintive “Shenandoah,” and Hersch gives sober, subtle, respectful treatment to a song that, as he writes in a program note, “I learned as a child and has so much emotional resonance for me.” One of the 20 variations is slightly skittish; another is slightly robust; the most memorable sprinkles tiny quivers in the pauses of a mild piano line. But the mood is consistent, and kindly.

Levit is one of classical music’s most politically outspoken figures, which is one reason that the untroubled sincerity of Hersch’s interpretation of “Shenandoah” is so striking. The song is thought to have its roots among the fur trappers of the early American Midwest and their relations with the Indigenous population; it is a melody that touches the core of our country’s history, in all its complexity. But these unvaried variations are a musical vision of nearly unbroken serenity and benevolence — notably, curiously nostalgic.

The “Tristan” prelude was here, in Zoltan Kocsis’s arrangement, far more progressive, its opening almost surreally elongated by Levit so that his eventual landing on flooding chords offered some of the shock this work held for its first listeners. Kocsis’s arrangement ends in shadows, out of which Levit’s Liszt emerged; a rough contemporary to “Tristan,” the sonata was here a stand-in for the opera.

It had the time-bending effect “Tristan” often does, its contrasting sections seeming to float alongside one another in a vast expanse. The sense of scale was memorable, as was Levit’s touch: densely liquid low rumbles; charcoal-black stark chords; extremely soft passages that sounded candied, like snow glittering in moonlight.

The coherence of his conception of the evening extended to the encore: the actual ending of “Tristan,” the “Liebestod,” in Liszt’s transcription. Its climax — which Liszt achieves by working the extreme ends of the piano simultaneously, to delicately epic effect — spoke for the recital as a whole, judiciously balanced yet thrilling.