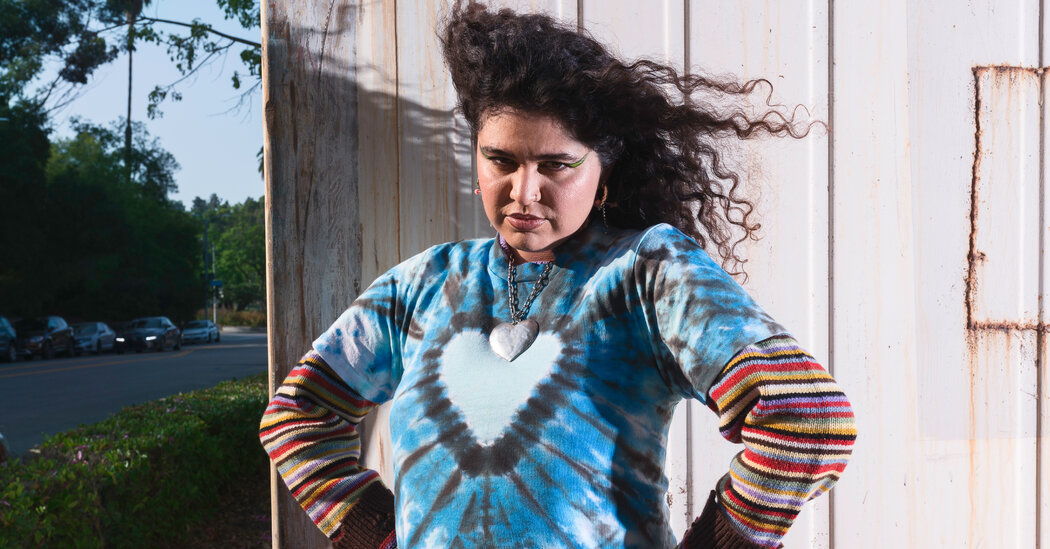 LOS ANGELES — Remi Wolf rolled up to an indoor trampoline park in Van Nuys on an August afternoon feeling frazzled. She’d been busy all day, making bugged-out visuals for her songs and prepping for tour. Then the traffic coming from the Eastside of Los Angeles was bad. So, so bad.

She’d be ready to sit and talk by the vending machines in a minute, but first she needed to bounce.

Wolf took off her light-purple Crocs and pulled on the regulation orange grip socks, which managed to complement her mishmashed look: a recently resurrected Urban Outfitters top she got in high school and a promo cap for a record label she’s not even signed to over her pile of brown curls. At 25 years old, Wolf was at least a decade older than almost everyone else ricocheting across the field of trampolines. Then she hit two forward somersaults.

On Friday, Wolf will release her debut album, “Juno.” It’s a collection of nerves, anxieties and self-recriminations set to ebullient melodies and unbound sonic collages. “Juno” was largely written and recorded during the pre-vaccine period of the pandemic. While many artists burrowed into the aesthetics of quiet during this era of isolation, Wolf turned the tumultuous emotions pent-up inside of her into hypercolored explosions.

“It’s not mellow at all, but it is very introspective,” she said. “I have a lot of energy. As a person, I can just go and go and go until I crash. And then I’m, like, depressed, or whatever.”

As the nebulously defined genre of bedroom pop breaks out beyond the barriers of the bedrooms it was once made in, Wolf has emerged as one of its most engaging talents, bolstered by an unconventional charisma and a powerful voice. “Remi is always pushing what it means to be pop and what it means to be a pop star — not even deprecating it, but just being able to laugh and think about pop music in a totally different way,” said Lizzy Szabo, a senior editor at Spotify who oversees Lorem, the influential, Gen Z-targeted playlist that has become part of Wolf’s dominion.

Like many people her age, Wolf has a keen ability to slurp up the often doofy flotsam of the recent past and make it seem far cooler than it was in the first place. That manifests itself in her love of hot-pink novelty trucker hats and candy-raver eye makeup, but it also applies to her taste in music. During a recent sold-out show at the Roxy in Los Angeles, Wolf covered MGMT’s “Electric Feel,” Gnarls Barkley’s “Crazy” and a portion of Shaggy’s “It Wasn’t Me,” all with a relatively straight face.

“I just follow these little wormholes in my head,” she said. “I just like to go down whatever imagery I think is describing how I’m feeling.”

Despite how nonsensical the lyrics may seem when isolated, to Wolf there is an internal logic behind all of them. Well, most of them. She knows exactly what she means in her song “Grumpy Old Man” when she says she’s got “feelings in my feelings” and “violets on my violence,” but admits that she came up with the line about having “boobies on my booty” just because those words are fun to sing.

Earlier this year, Wolf released “We Love Dogs!,” a compilation of remixes of her earlier songs. It included interpretations from known genre twisters like Nile Rodgers and Panda Bear, but also a version of “Photo ID,” her most streamed song, featuring the ascendant star Dominic Fike, who’s become a friend. “A lot of people have their style figured out or maybe a general sound,” Fike said. “She has something special in how she puts together her songs. I feel like Remi is a real singer. Every once in a while they come around, and she’s one of those.”

Despite being raised in the largely flat and snowless Bay Area city of Palo Alto, Wolf began training as a downhill ski racer at 8 years old. She spent weekends staying at a cheap hotel in Truckee, a town near Lake Tahoe. She went to the Junior Olympics twice. “I was bouncing between different friends all the time, so nothing ever felt safe,” she said. “I became very independent and very insular in my own being.”

When she was 16, Wolf quit competing and threw herself into music with the same resolute mind-set that’s required of athletes. “Once I stopped skiing, I was like, ‘OK, I need something else to do just as intensely and just as hard,’” she said. She started a duo with her friend Chloe Zilliac called, naturally, Remi and Chloe. At 17, Wolf tried out for “American Idol” and got invited to Hollywood, but her experience there didn’t last long.

While participating in an after-school music program, a teacher teamed her up with another one of his pupils, a young multi-instrumentalist named Jared Solomon. He had them play “Valerie” by Amy Winehouse, with her singing and him on guitar. “We were instantly like, ‘Whoa, you’re really good,’” Wolf said.

Solomon joined Remi and Chloe’s backup band, and they’d rehearse in his garage twice a week before he left to attend Berklee College of Music in Boston. When Wolf graduated from the U.S.C. Thornton School of Music a few years later, Solomon reached out to see if he could crash at her place while passing through Los Angeles as his friend’s tour D.J. The two hadn’t really talked in five years; he ended up staying for a week. They experimented on a few songs together in that span, including “Sauce,” a slinky jam that remains one of Wolf’s most popular tracks.

At the time, she had been trying to break into the music industry as a songwriter. “I was on a bunch of Adderall and I was psychotic at that point,” Wolf recalled. “Then he came through, then we did our thing and then we were like, holy [expletive]!”

Solomon became and remains Wolf’s closest musical collaborator. “We’re just so locked in to each other’s energy, especially musically,” Wolf said. “It’s hard for people to penetrate that.” Wolf produced most of the songs on “Juno” with him (he uses the name Solomonophonic), though more established figures including Kenny Beats and Ethan Gruska contributed to a few songs on the album, too. Solomon also plays in her live band, towering over Wolf in a Pantera T-shirt with cutoff sleeves.

The earliest work that Wolf put out often leaned toward jazzy soul — which she attributes to her love of major and minor seventh chords — but with “Juno” she widened the scope. While Erykah Badu remains a constant influence, during the album’s making she listened to artists like Jack White, Beck, Sheryl Crow and Michelle Branch. “I’m kind of a rock singer,” Wolf said. “That’s what I started singing, and then I moved more into soulier stuff. But I’m a belter. I love screaming.”

A significant moment in Wolf’s personal life also had a major impact on “Juno”: she entered rehab during the summer of 2020, a change that was at least three years in the making. Before, Wolf said, she frequently drank to the point of blacking out. While she said she was usually able to function in her daily life, she had started getting into huge fights with family, friends and collaborators.

Drinking left Wolf feeling awful all the time. Her sobriety revitalized her energy and excitement, but it also forced her to confront all kinds of emotional issues that she didn’t make space for with her goal-oriented approach. “So much came up that I didn’t even know existed,” she said. “I didn’t even know what growing as a human was. I knew obviously people were like, I’m growing, blah blah blah. Now I’m like, life is about growth. Which never occurred to me. It’s so insane.”

When the interview was over, Wolf returned to the trampolines. She took a few flying leaps onto a gigantic inflatable pillow before deciding to grab a final ride on the zip line. She climbed the steps to the top of the platform, listened to a safety spiel from the attendant and then turned around to give a thumbs up to the security camera mounted on the wall. And then, she was off.