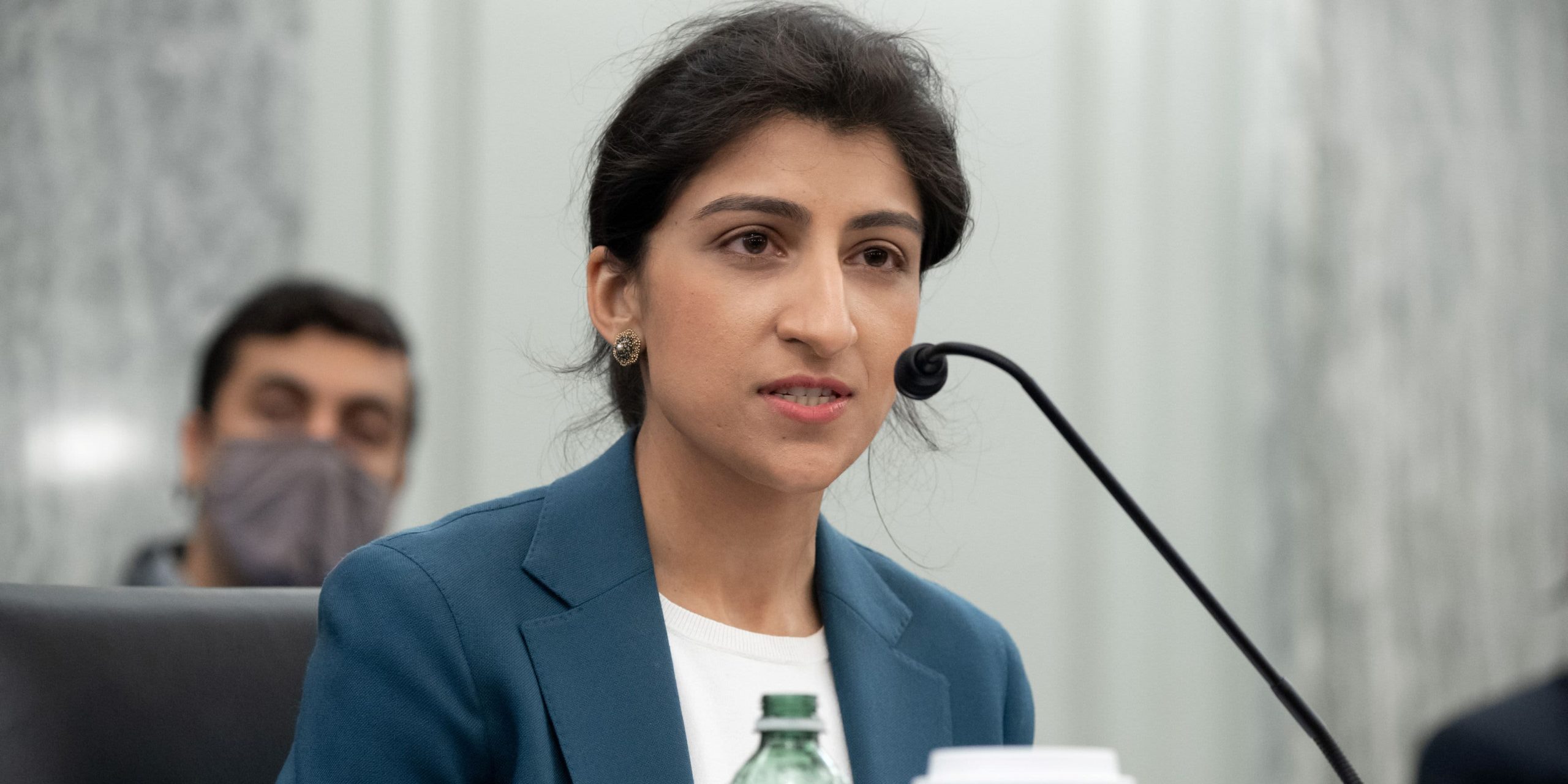 Last month Lina Khan, the new chair of the Federal Trade Commission, issued an internal memo setting out her goals for the agency. It is a paper loaded with bureaucratic abstraction. Khan calls on the agency to “harness” a “strategic approach,” “execute on best practices,” “broaden…institutional skillsets,” “prioritize…core operational objectives,” and “apply an integrated approach” that “surface[s] interconnections.”

Underneath the linguistic bunkum, however, are some bold claims about the agency and its place in the world. Khan calls for a “holistic” (read: expansive) approach to antitrust law, one that (somehow) balances the interests of “workers and independent businesses as well as consumers.” She urges staff to operate more like industrial planners—administrators who identify “root causes,” dictate “market structure,” and control “macro effects.” She declares the agency a “body whose work shapes the distribution of power and opportunity across our economy.”

A government agent bent on “shap[ing] the distribution of power” is presumably in want of formidable power herself. Khan has granted herself unilateral authority over antitrust investigations, barred agency staff from speaking in public, and dismissed a respected economist from one of the agency’s most notable cases. She has expanded the agency’s discretion to challenge vertical mergers, its power to attach conditions to merger approvals, and its ability to expedite (and politicize) the making of rules governing trade practices. In an especially high-handed move, the agency has on Khan’s watch announced that instead of approving certain mergers, it will simply tell the parties that they may merge “at their own risk,” the agency reserving the right to unwind deals later. Make no mistake, merger reviews still occur; but now, they are reportedly being used to interrogate firms about social justice and ESG (environmental, social, and corporate governance) matters unrelated to competition. If you’re still not impressed, consider that all of this occurred in the new chair’s first three months in office.

Khan’s crowning ambition is to overturn the consumer welfare standard, the set of judge-made rules that, for the last forty years or so, has kept antitrust enforcement focused on promoting low prices, high product quality, and efficient innovation. She wants to use antitrust policy instead as a tool for regulating working conditions, redistributing wealth, assisting favored firms and industries, and promoting democratic values (which is to say, using state power to pulverize and subdue the private sphere).

Khan’s opening move in this regard was to repeal a bipartisan 2015 policy statement that had made “the promotion of consumer welfare” the principle “guide” of the agency’s antitrust policy. The next logical step (assuming that Khan can keep two other commissioners in sympathy with her aims and method—a modest assumption indeed) is to bring antitrust cases that promote socio-political goals at consumers’ expense.

Such cases could go badly for the FTC. The agency has tried this ploy before, in fact, and found itself disappointed. The agency draws its antitrust enforcement authority from Section 5 of the FTC Act, which declares that “unfair methods of competition” are “unlawful.” Everyone agrees that the Section 5 ban on “unfair methods” supplements (and thus sweeps more broadly than) the Sherman Act’s bar on “restraint of trade” and the Clayton Act’s bar on mergers that “substantially…lessen competition.” In the 1970s the FTC used its enforcement authority to probe just how far beyond those other antitrust laws Section 5 really goes. In a trio of losses for the agency, the courts answered “not much.”

“The term ‘unfair’ is an elusive concept,” wrote the U.S. Court of Appeals for the Second Circuit in E.I. Du Pont De Nemours & Co. v. FTC. Reasonably construed, it must not permit “arbitrary or undue” state “interference” with the “freedom of action that has marked our country’s competitive system.” So although the agency may bar “incipient violations” of the other antitrust laws, and conduct that is “close to a violation” of those laws, it must confine itself to attacking conduct that either has an “anticompetitive intent” or lacks a “legitimate business reason.”

Khan is likely to challenge this restricting precedent, of course. And she is likely to go further still. Not only does she want greater power to define, in discrete prosecutions, what qualifies as an “unfair” method of competition; she wants greater power to declare entire categories of conduct “unfair,” at a stroke, through agency rulemaking. But if the drive to expand the meaning of “unfair methods” is bold, the drive to do so through substantive rulemaking is downright brazen.

Section 5 sets forth in detail the procedures the agency shall use for its “unfair methods” antitrust enforcement. The agency must file a complaint against a specific party, collect evidence and hold a hearing, and issue an order containing findings of fact. Every observer long understood that the FTC Act created a “quasi-judicial” body (as the Supreme Court called it). This included Justice Brandeis, a key supporter of the Act and the muse of the modern “Big is Bad” antitrust movement. The Act, Brandeis acknowledged, created “an administrative tribunal.”

The assumption that the agency may bar “unfair methods of competition” only through case-by-case adjudication stood until the 1960s, when the agency abruptly “discovered” the authority to issue binding rules of conduct. The agency found this authority not in Section 5, but in Section 6, an assortment of ancillary provisions enabling the agency to “gather,” “compile,” and “make public” information about firms’ business practices. A single cryptic sentence, buried deep in that otherwise elaborate section on investigations, permitted the agency “[f]rom time to time to classify corporations and to make rules and regulations for the purpose of carrying out the provisions of this Act.”

If this reads like a “housekeeping” provision—a nod to an agency’s need to set or clarify its own internal procedures—that’s because it is. Indeed, in 1914, when the Act was passed, a well-established convention of legislative drafting held that a naked “rules for carrying out” clause—one that never says what penalty would attach to a rule violation—grants an agency the power to set rules governing the agency itself, and not the public at large. Nonetheless, in 1973 the D.C. Circuit blessed the agency’s Section 6 “discovery.”

“We’re all textualists now,” Justice Kagan announced in 2015. A textualist would focus, of course, on the law’s text and structure—including the fact that Section 5 and Section 6 read like they originated as entirely distinct bills (as, it so happens, they did). By this standard of statutory interpretation, the fifty-year-old D.C. Circuit decision is blazingly pre-modern. “We’re not all textualists yet!” it shouts from the past. The D.C. Circuit discussed the statutory text and structure only in passing. Instead, it leaned heavily on the “purpose” of the FTC Act, as well as the sense of felicity that the court itself gained from its statute-expanding decree.

The FTC issued only one unfair-methods rule under Section 6. It never enforced that rule, and it has never tried to promulgate another one. But on Khan’s watch that is almost certain to change. Khan has argued that the agency has unfair-methods rulemaking authority; she has urged the agency to use that authority; private parties have started proposing rules for the agency to issue; and Khan has signaled that she welcomes those petitions.

An expansive reading of Section 6 is not merely lacking in textual support. The Constitution grants “all legislative Powers” to Congress. Agency rulemaking authority over the meaning of the term “unfair methods of competition” violates that constitutional imperative. So, for that matter, does overly broad agency authority to define “unfair methods” case by case. To understand the problem, consider the eerie parallels between Khan’s project and Schechter Poultry v. United States (1935), the Supreme Court’s clearest statement of the principle that Congress may not delegate its legislative power to others.

Like Khan’s ideal antitrust policy, the National Industrial Recovery Act (NIRA) of 1933 had many goals. Among them were to “reduce and relieve unemployment,” to “improve standards of labor,” to “avoid undue restriction of production,” and “otherwise to rehabilitate industry.” And like Khan’s version of Section 6 of the FTC Act, Section 3 of the NIRA empowered the executive branch to set rules of competition. Much as Khan would have the FTC set rules on “unfair methods of competition,” the NIRA empowered the president to adopt “codes of fair competition.” The president could adopt a code if he decided it would “tend to effectuate” the NIRA’s (many and conflicting) policy goals.

“If our constitutional system is to be maintained,” Schechter Poultry observes, there must be some limit to “the authority to delegate.” The NIRA, the justices unanimously concluded, crossed the line. It “supplie[d] no standards” directly, and it contained no rules “to be applied to particular states of fact” found by “appropriate administrative procedure.” Instead, it gave the president “virtually unfettered” discretion to enact “laws for the government of trade and industry throughout the country.” This attempt “to transfer [the legislative] function to others” could not stand.

Schechter Poultry identifies two differences between the FTC Act’s “unfair methods of competition,” on the one hand, and the NIRA’s unconstitutional “codes of fair competition,” on the other. First, under the FTC Act, “unfair methods” are “to be determined in particular instances, upon evidence, in light of particular competitive conditions.” This “special procedure,” which made “provision” for “formal complaint,” “notice and hearing,” “findings of fact,” and “judicial review,” ensured that the agency’s discretion in defining “unfair methods” would remain narrow. The NIRA, by contrast, “dispense[d]” with “administrative procedure.” It granted a power “to authorize new and controlling prohibitions” in “codes of laws”—i.e., binding rules.

Second, although the term “unfair methods of competition,” when introduced in the FTC Act, was “an expression new in the law,” it remained tethered to the older term “unfair competition.” That common law phrase referred specifically to “acts which lie outside the ordinary course of business and are tainted by fraud, or coercion, or conduct otherwise prohibited by law.” The “fair competition” referred to in the NIRA, meanwhile, had “a much broader range and a new significance,” because it came attached to that statute’s “broad range of objectives.”

These are major barriers to an expansion of FTC power. Although Khan wants to create rules under Section 6, this would “dispense with administrative procedure” in favor of the passage of “codes of law.” That, in turn, would create a non-delegation problem. And although she wants to turn “unfair methods of competition” into an open-ended term—one that can generate measures targeted at “market structure,” “macro effects,” “root causes,” and “the distribution of power and opportunity across the economy”—that would turn the FTC into a “virtually unfettered” lawmaker, just as the president was under the NIRA. That, again, would create a non-delegation problem.

As court-watchers know, executive branch officials cannot treat Schechter Poultry as some obsolete relic. In Gundy v. United States (2019), which was heard by only eight justices, three—Gorsuch, Roberts, and Thomas—urged the Court to revive non-delegation, and a fourth—Alito—expressed an openness to doing so in a case with a full bench. Since Gundy was decided, Justice Kavanaugh has joined the Court, and Justice Barrett has replaced Justice Ginsburg. The math is not hard. There may now be six justices who wish to cabin “executive lawmaking.” An overreaching FTC could hand those justices a golden opportunity.

So in the end that striving dynamo, Lina Khan, could well leave the FTC weaker than she found it. It would hardly be the first time that vaulting ambition o’erleaped itself.