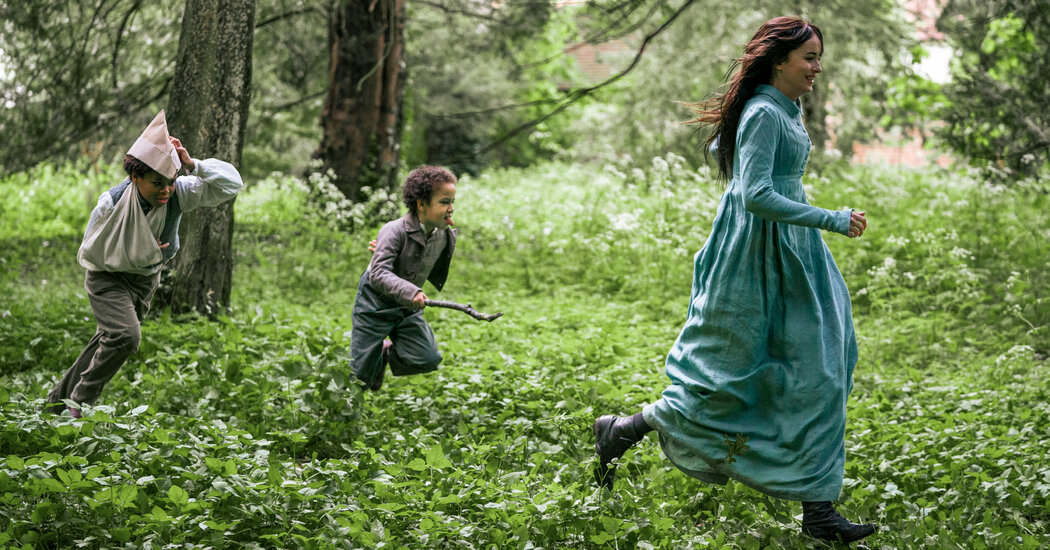 The great irony of this new, not-quite-modernized adaptation of Jane Austen’s final novel, “Persuasion,” is that it communicates its tense relationship to its 19th-century source material in a repressed, passive-aggressive manner — an approach oddly suited to Austen’s trenchant view of society. The film doesn’t take the creative leap to transpose the beloved story in the present day. Instead, in curiously excruciating fashion, the director, screenwriters, and star imply their discomfort with Georgian-era social norms from within the novel’s period setting.

Both the film and the novel begin in the early 1800s, as the story’s heroine, Anne Elliot (Dakota Johnson), visits her sister Mary (Mia McKenna-Bruce) in the English countryside, after their father squandered the family savings. Anne is an unmarried woman who is fortunate to be respected — or, at least, perceived as useful — by her blue-blooded relations. But in direct addresses to the camera, Anne admits that she is haunted by the memory of a love affair she was persuaded to end with an enterprising but fortuneless sailor, Frederick Wentworth (Cosmo Jarvis).

Now Anne is alone, and her regrets only grow when Wentworth returns to the country as a wealthy naval captain. He’s eager to find a wife, and if his sights are first set on Anne’s lively sister-in-law Louisa (Nia Towle), his attention always seems to wander back to Anne.

For this story of rekindled romance, the film summons the handsome appointments expected for a big-budget period drama. There are extravagant mansions, brocaded costumes and magnificent vistas. But there is a crisis of contemporaneity at the heart of this pretty adaptation, and the trouble begins with its presentation of its heroine.

Johnson, wearing smoky eye shadow and pink lipstick, displays the confident appeal of a celebrity sharing her secrets with the audience. Her smile reads as a smirk. The incongruous bravado of her performance is mirrored by the film’s script, written by Ron Bass and Alice Victoria Winslow, which peppers lines from the novel with meme-ish truisms like, “Now we are worse than exes. We’re friends.”

The contrast between the modernized dialogue and Austen’s period-appropriate language only makes both styles seem more mannered. The story’s heroine, its dialogue and even its themes of regret and loneliness seem to be swallowed up by the need to maintain an appearance of contemporary cheek.

For fans of Austen’s novel, it’s hard to imagine the director Carrie Cracknell’s version providing a sense of ease or escapism. Instead, the unbearable tension between past and present serves as a disarmingly naked window into the anxieties of current Hollywood filmmaking. Better to have the whole movie be a skeptical, uncertain affair than to risk presenting a pre-feminist heroine who lacks confidence.