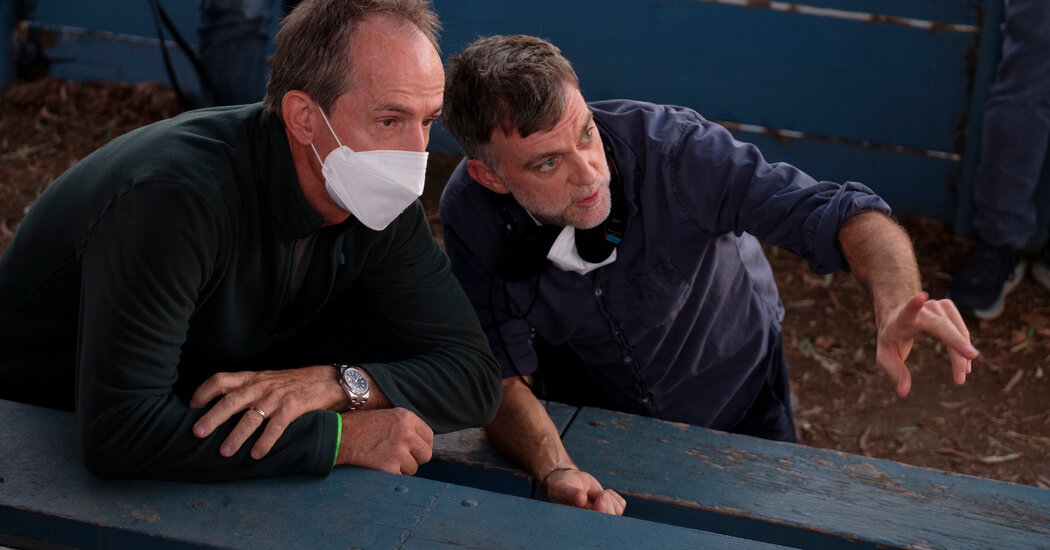 Maybe Paul Thomas Anderson brought the fog with him. The 51-year-old director had just returned from a trip to London, where his last film, “Phantom Thread,” was set, and now the sky above his native San Fernando Valley was choked by dark, portentous clouds.

“I like it like this,” Anderson said as we sat outside a vegan Mexican restaurant in the Studio City neighborhood. “You never get the fog cover here. Take it while you can!”

Anderson is the auteur who made the sky rain frogs in “Magnolia”; in front of his camera, even Southern California’s normally placid weather has the potential for grandeur. The movies he has set here, including “Boogie Nights,” have an engaging sprawl not unlike the Valley itself, and Anderson has returned to his home turf for his ninth feature, “Licorice Pizza,” opening Friday.

The 1970s-set movie stars Cooper Hoffman, son of Anderson’s onetime muse, Philip Seymour Hoffman, as a smooth-talking high schooler named Gary, who flirts shamelessly with Alana (Alana Haim), a 20-something girl helping to take class pictures. She rebuffs his advances, but there’s still something about this guileless hustler that intrigues her, and they become friends, business partners and eventually something more.

Hoffman is sweet and appealing, but the revelation of “Licorice Pizza” is Haim, a marvelously spiky screen presence. Though she had never led a movie before, Anderson has directed several music videos she appeared in with her sisters Danielle and Este, who together form the rock band Haim. “It’s funny, because she’s not the best musician in the band, but she’s the best actress,” Anderson said.

Here are edited excerpts from our conversation.

How did you get into the orbit of Haim and meet Alana Haim in the first place?

That story is wild. I first heard their music on the radio in about 2012, the song “Forever.” Then I heard it again and again and I started to think, “This song is following me around.” I read a little bit about them, realized they were from Studio City. We invited them to our house for dinner, and then they revealed to me that their mother was a woman named Donna Rose, who was my elementary-school art teacher.

You had no idea?

None. I’m the father of three girls, and you can imagine and hope that your daughters would turn out to be this miraculous. But there was something else I couldn’t put my finger on, some unexplainable feeling that I had, so when they told me that their mother had been my teacher, everything made sense. Like, why did I have this weird obsession with these three girls playing music?

And their mother was a huge influence on me. I went to a school with, like, white-haired ladies who were rough, and there was one lady with long, beautiful, flowing brown hair — who looked exactly like Alana, by the way. I was in love with her as a young boy, absolutely smitten. She would sing songs during class, and she was the exact opposite of every other teacher. So that cemented the relationship in a pretty serious way. Our collaboration was more than just directing their music videos — our families became intertwined.

And when did you zero in on Alana as the lead in “Licorice Pizza”?

The music videos generally focus on [her older sister] Danielle, because she’s the lead singer. But when I thought about this story that I had, it fit Alana.

I’ve seen Alana’s ferociousness. She may look like a Jewish girl from the Valley, but she’s sort of a ’30s throwback, fast-talking, very funny, very sharp. You do not want to challenge her in a fight with words, because she will win.

Did the studio want you to cast an established actress instead of Alana?

It was no battle. MGM trusted my track record, I suppose. By the way, I wouldn’t want to think about having to convince another actress to not wear makeup and drop that level of vanity that seems to surround a lot of young actresses. It takes somebody with some guts to say, “It’s impossible to justify wearing makeup in the San Fernando Valley in 1973, therefore I won’t do it.” It sounds like not that big a deal, but it’s a big deal for a lot of people.

You wrote the film with Alana in mind. Did you also think of Cooper while writing it?

No. Halfway through, he popped into my mind, but I quickly put the lid back on that thought.

I’ve been asking myself why. It’s probably because I was protective, thinking, “Hang on a second, there’s a traditional way to do this, and there are many young actors out there.” But I wasn’t finding anybody that seemed to have the same soulfulness I knew he had. Everybody seemed precocious, perhaps too trained at too young an age.

It was odd, the way everything started to line up. This was a very homegrown film where I’m casting from a pool of my life, not just a collection of actors that I’ve auditioned. How am I going to enter into this with the lead actor being somebody that I don’t know personally and intimately? But as a matter of fact, I didn’t really tell him what I was thinking. I said, “Just look at this script, and maybe you can help me read it out loud so I can hear something.”

You’re secretly auditioning the people in your life all the time, aren’t you?

Exactly. Of course, it didn’t work at all. He saw right through it.

When you’re casting somebody like Cooper Hoffman, who has never led a movie before, what are you thinking about how the fame from this will change his life?

You think about locking the door and throwing away the key and protecting them. Or, more realistically, holding their hand and guiding them through a creative endeavor, and showing them that the reason you do it is for the collaboration and the experience. But it’s a good question. Another way to phrase the question is, “Have you ever thought about why you’re trying to ruin this person’s life?” [Laughs.]

Does it surprise you how some people are reacting to the age difference between Alana and Gary?

There’s no line that’s crossed, and there’s nothing but the right intentions. It would surprise me if there was some kind of kerfuffle about it, because there’s not that much there. That’s not the story that we made, in any kind of way. There isn’t a provocative bone in this film’s body.

There’s at least one provocative bone in this film’s body. I’m thinking of the scenes with a white restaurateur, played by John Michael Higgins, where he talks to his Japanese wife in an accent so offensive that my audience actually gasped.

Well, that’s different. I think it would be a mistake to tell a period film through the eyes of 2021. You can’t have a crystal ball, you have to be honest to that time. Not that it wouldn’t happen right now, by the way. My mother-in-law’s Japanese and my father-in-law is white, so seeing people speak English to her with a Japanese accent is something that happens all the time. I don’t think they even know they’re doing it.

Gary and Alana are fascinated by Hollywood. When you were growing up in the San Fernando Valley, what did Hollywood mean to you?

I made the mistake of thinking that there was some magical place over the rainbow that you could get to where films were made, when in fact that’s just not the case at all. Hollywood is Warner Bros. Hollywood is Burbank. Bedford Falls [from “It’s a Wonderful Life”] was not shot in Bedford Falls, it was shot in Encino.

Even though your dad worked in television, you still believed that Hollywood was some mystical place over the hill from the valley?

Probably, because talk about a different time. It was a time when movies were magical, and TV was just something you had in a box at home. Those days are long gone, you know? I was at the office the other day and a woman said, “I’ve seen this brilliant new film. It’s called ‘Dopesick,’ with Michael Keaton.” I said, “I think that’s a limited series.” She said, “Yeah, whatever.” She doesn’t really think about films as much as I do or you do. She was just like, “What are you talking about? It’s a film to me.”

Those lines are being blurred, but sometimes I watch a limited series and I think, “Shouldn’t this be a movie?”

It’s a great format when it works. It’s exciting. Then again, so are series. I’ve never dipped a toe in that world, but I can imagine it being very difficult to sustain the life of a story for more than two, three, four seasons.

Have people ever coaxed you to dip a toe in that world?

No, no one asks. I’m just sort of playing in my own corner of the sandbox. As a writer, I think we have fantasies when you struggle with editing material down: “I have so much material, perhaps this is a limited series.” When in fact, no, it’s not, you just need to edit down your story. I mean, a film should preferably be two hours. That’s when they’re at their best. I’ve missed that mark multiple times, but that’s really the goal.

The last time I spoke to you, for “Phantom Thread,” you said that after filming in London, your next movie would probably be made here in the valley.

Did I really? Isn’t that interesting. I wonder how serious I was.

Any guesses, then, on where you’ll want to go after “Licorice Pizza”?

I have a few different things that I’ve written that need to be addressed, but I don’t know what will end up happening. It’s like going shopping after you’ve just eaten a full meal: You know you’ll be hungry in a minute, but you’re still full. And time is more valuable than anything when it comes to writing. [Pause.] Well, a deadline is more valuable. But I also love the sound they make when they whoosh right past my eyes.

It’s an island that is closer to France than to England — yet it is part of the British Isles.  It’s home to miles of tunnels built during World War…