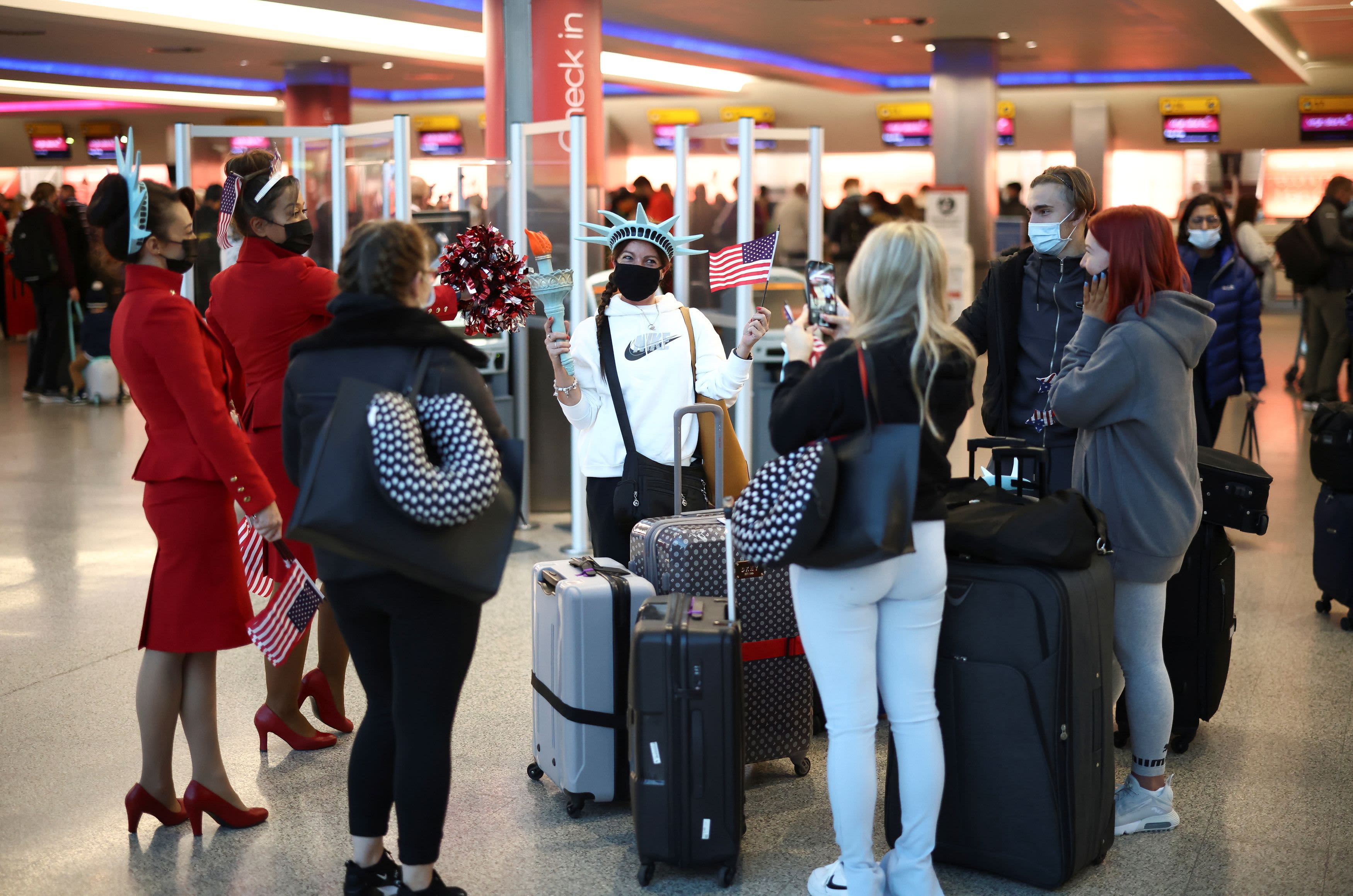 A woman poses for a photograph before she checks into a flight at Heathrow Airport Terminal 3, following the lifting of restrictions on the entry of non-U.S. citizens to the United States imposed to curb the spread of the coronavirus disease (COVID-19), in London, Britain, November 8, 2021.

The United States on Monday ended a pandemic travel ban that was in place for more than a year and a half, a relief for the tourism industry and for families that have been separated by the rules since the pandemic began.

The ban, put in place by President Donald Trump in early 2020 and later expanded by President Joe Biden early this year, prohibited visitors from 33 countries, including the U.K., much of Europe, China, Brazil and South Africa.

Now, visitors can fly into the U.S. with proof of full Covid-19 vaccination, though there are exemptions for travelers under age 18 and passengers from countries with low vaccination availability. (Read about the new rules here.)

A traveller arrives at Heathrow Airport Terminal 3, following the lifting of restrictions on the entry of non-U.S. citizens to the United States imposed to curb the spread of the coronavirus disease (COVID-19), in London, Britain, November 8, 2021.

Airline executives have said bookings have surged since the Biden administration said it would lift the restrictions.

European countries had relaxed rules for international visitors, including for U.S. citizens, starting in the spring. U.S. officials didn’t reciprocate, however, though airlines and other travel industry companies urged the Biden administration to reopen borders.

Shares of United Airlines, Delta Air Lines and American Airlines were each up more than 2% in premarket trading. Those carriers have the most international service of the U.S. airlines and stand to benefit the most from the resumption of U.S.-bound travel.

Airline staff at London’s Heathrow Airport carried U.S. and British flags to celebrate the end of the travel restrictions.

A Virgin Atlantic spokeswoman said its U.S. flights today are 98% full. British Airways Flight 1, a number previously used for the Concorde, took off from Heathrow along with Virgin Atlantic Flight 3, just before 8:30 a.m. GMT for New York’s John F. Kennedy International Airport in a synchronized takeoff on parallel runways.