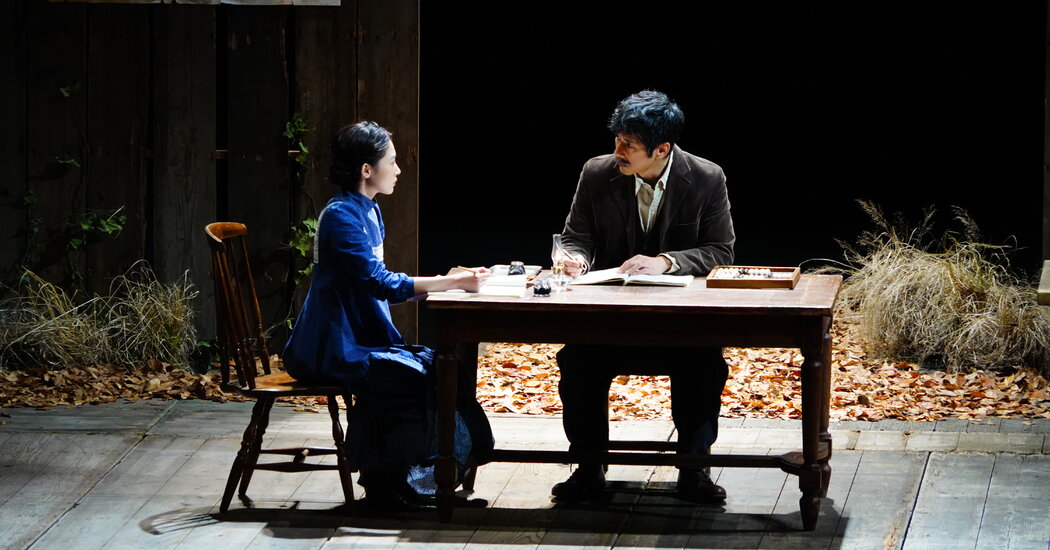 I’m going to talk about how the movie ends, but I’m not going to spoil it.

The plot of “Drive My Car” doesn’t really work that way in any case. Adapted by Ryusuke Hamaguchi (working with Takamasa Oe) from a novella by Haruki Murakami, the film is an adventure of gentle turns and an occasional swerve, with big surprises and small revelations scattered like scenery on a long road trip. You may be startled at how quickly it all goes by; the movie lasts almost three hours, but the time passes easily.

A brief, tactful summary may be in order, a kind of Google Maps précis of the route. Yusuke Kafuku (Hidetoshi Nishijima), a Tokyo theater director and actor, is married to Oto (Reika Kirishima), an actress, who is having an affair with a younger colleague. The couple had a young daughter who died some years before, and when Oto dies suddenly, she leaves Yusuke paralyzed with grief. Or so we surmise. He has a tendency to camouflage his feelings behind a facade of calm, punctuating his habitual reticence with an occasional flash of irritation or sardonic humor.

He keeps working, taking up a residency at a Hiroshima arts center, where he will direct an experimental production of Chekhov’s “Uncle Vanya.” I don’t think I can spoil that one either. The great works are like that, and one of the marvels of “Drive My Car” is the way it illuminates and refreshes a sturdy old classic, deriving some of its own power, novelty and mystery from Chekhov’s well-thumbed text.

A little bit more about “Drive My Car,” though. In Hiroshima, Yusuke is assigned a chauffeur, Misaki (Toko Miura), who shuttles him to rehearsals, errands and social engagements in his beloved red Saab. Like Yusuke, she has suffered a terrible loss, and their shared grief — or rather, their common state of raw, lonely, unacknowledged anguish — becomes the foundation of a delicate and improbable friendship.

The story of that bond culminates in an intensely emotional scene in a snowy field — tears are shed, and Yusuke at last gives voice to his hitherto unarticulated pain — that would surely be an Oscar-night showstopper. (And if the academy has the good sense to nominate “Drive My Car” for best picture and Nishijima and Miura for acting, maybe it will be). But what I want to talk about is what happens next.

Which is that the show goes on. As the “Uncle Vanya” opening night approaches, we have been privy to some backstage intrigue and immersed in Yusuke’s unusual approach to the play. The cast includes actors from various countries, all of them speaking Chekhov’s dialogue in their native languages, including Mandarin, Japanese, Tagalog and Korean Sign Language. Once an audience is present, supertitles are projected on a screen behind the stage. The English-language viewer, already reading subtitles, learns to listen for the tones and rhythms of the different languages, including the swish and tap of signing hands.

That may sound forbiddingly cerebral, like the kind of high-concept aesthetic undertaking that tends to be more interesting in theory than in practice. It turns out to be the opposite. “Uncle Vanya,” a play about how hard it is to hold onto a sense of what matters in life, has rarely felt more vital or immediate, as if it had not been written in the 1890s but rather lived in front of our eyes.

Yusuke, white powder sprinkled in his hair and a mustache pasted to his lip, is playing the title role, a 47-year-old man driven almost to madness — almost to murder — by unrequited yearning and existential disappointment. His appearance onstage is an unexpected development, the payoff of a subplot that I will leave to you to discover.

Yusuke has stayed away from acting since Oto’s death, and as “Uncle Vanya” unfolds, the shock to his system seems apparent. After Vanya’s Act III rant about his squandered prospects and bitter regrets — “If I’d lived normally, I might have been another Schopenhauer or Dostoyevsky!” — he steadies himself against a table in the wings, seeming to struggle for breath and composure.

Perhaps Vanya’s plight reminds him of his own, or perhaps the demands of acting are too much to bear. The first Russian production of “Uncle Vanya” was directed by Konstantin Stanislavsky, the progenitor of Method acting, in which the actor plumbs his own experience to locate the emotional truth of the character. Knowing what we know about Yusuke — having seen him weeping in the snow in the previous scene — it’s easy to grasp why he would be overcome by Vanya’s torment.

But he’s also a professional, and the scene proceeds briskly through a montage of the performance. We see the onstage action from the side, then on a video monitor in the green room, observing the movement of props and bodies rather than absorbing the movement of Chekhov’s drama. The film seems to be settling into a muted denouement.

Instead, we watch the end of “Uncle Vanya.” The busyness and artifice of the theater fade away, and so does the artifice of cinema. The actors face the camera, which approximates the point of view of a member of the theater audience. A crucial reverse shot reveals that Misaki is in the house, watching what is in effect the representation of a moment from her own life.

Not precisely, of course. Art isn’t a mirror; it’s a dream. But “Uncle Vanya” ends with a middle-aged man and a younger woman coming to realize that they are bound by a love that isn’t romantic or sexual, but in some way spiritual. Vanya is “uncle” only to Sonya, the daughter of his dead sister and Professor Serebyakov, the prominent intellectual who Vanya believes has ruined his life. While Vanya is in love with Serebyakov’s current wife, Yelena, he also shares his heartbreak with Sonya, and is kept from despair by her tender, melancholy expression of faith.

You don’t have to know the play to feel the power of the scene. You don’t even have to read the subtitles. A deaf Korean actress, played by the extraordinary Park Yurim, is Sonya, and her final monologue is delivered in Korean Sign Language. Vanya — in other words Yusuke, in other words Nishijima — is seated at a table, and Sonya leans over him, her face hovering behind and alongside his as her hands glide and flutter in front of his eyes. When a sign involves touching a cheek or gesturing toward a mouth, his face becomes a part of her speech, and her words become caresses and gentle taps against his skin.

The feeling of two people joined in an experience that surpasses language and transcends physicality has a power that I have rarely encountered in theater or film. This intimacy is created not by stripping away artifice, but by adding more layers, creating a state of communion between the two art forms.

“We must keep on living,” Yusuke says to Misaki in their final scene together in the snow. “We’ll be OK.”

“We will live, Uncle Vanya,” Sonya promises Vanya at the end of Chekhov’s play. “We will rest.” The statements echo each other, but it’s not just that Hamaguchi is finding confirmation in Chekhov, or relying on the authority of a past literary master to certify his theme. It’s not even as if we need movies or plays to tell us that life goes on — only, by an alchemy we scarcely understand, to make us believe it.