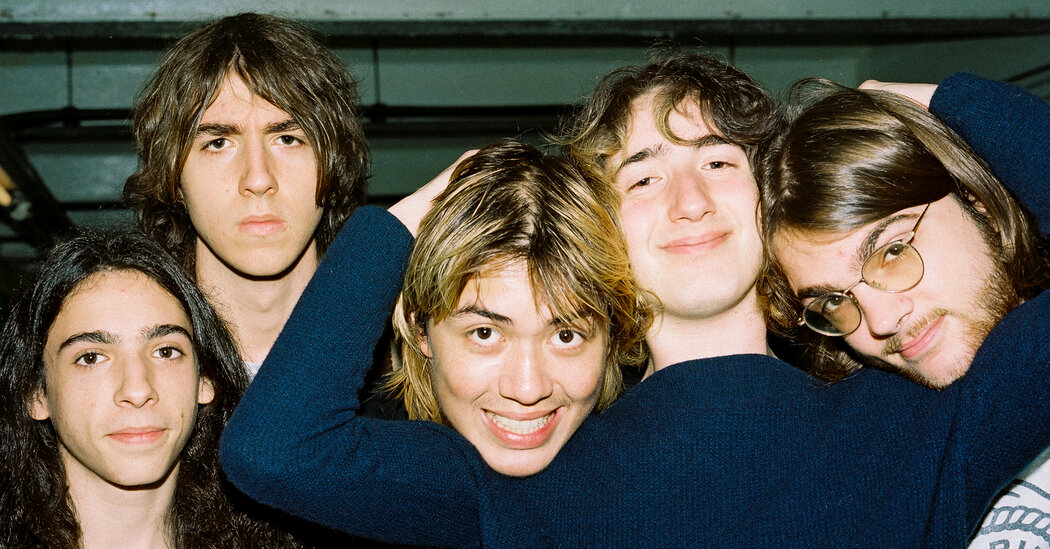 Every year, scores of young bands try their hardest to get a label deal that might provide a shot at stardom. For Geese, a Brooklyn-based rock group of five wiry teenage friends, nothing could have been further from their minds. “The band was going to end when we graduated high school,” the guitarist Gus Green said. “None of us thought anything would happen.”

Until, that is, a lot of stuff started to happen. After Geese put several songs from its home-produced album on Spotify in spring 2020, a young manager who had done consulting work for Atlantic Records got in touch and made a passionate case to work with them. He asked for their dream list of labels, which inspired them to reel off cool indies like 4AD and Sub Pop. To the teens’ slack-jawed surprise, both companies came back with offers.

By that fall, the band decided to sign a joint deal with the British label PIAS and the New York-based Partisan Records, which has helped jump start two successful young bands: Idles and Fontaines D.C. In late August, Geese sold out a show at the Brooklyn club Elsewhere, and this month the band performed a set at the new venue Brooklyn Made where it played with such energy, the drummer Max Bassin kicked right through his kit. Days before the band’s debut album, “Projector,” arrives this week, the 19-year-olds will play the Shaky Knees festival in Atlanta. Then, in November, they’ll begin a six-month domestic and international tour — a considerable leap for a band that has barely played more than a dozen gigs.

“Our last show was in a club and now we’re going to play a festival?” Bassin said incredulously. “It’s nerve-racking.”

A few weeks ago, as the teens sat in the sunroom of the funky Fort Greene brownstone owned by Bassin’s parents, they talked about the experience of essentially stumbling into what’s looking like a career. “I would tell myself, ‘Yeah, I’m excited for it,’” the guitarist Foster Hudson said. “Then I realized, ‘Oh man, there’s this tightness in my chest.’ I didn’t realize how much stress it was causing me.”

Then again, mania and nervousness have served as prime muses for the band’s sound since its members started playing together as high school freshmen. Inspired by both the complexities of prog-rock and the angularity of post-punk, Geese makes dense and frantic music, centered on the bracing interaction between the two guitars. The band’s sound presents a virtual Venn diagram of New York underground rock history, with overlapping references to Television, the Feelies, Swans and the Strokes.

“It’s definitely music from New York and all of the movements from here,” Bassin said.

Hudson first discovered Television at age 12 when he was instructed to play a version of that band’s signature piece “Marquee Moon” in a class he was taking at the School of Rock program, where the bassist Dominic DiGesu was also studying. Several of the members have known each other since elementary school; others bonded at the progressive Little Red School House High School in Manhattan.

The band — named for the pluralization of Green’s nickname, Goose — didn’t feature Hudson in its original lineup. Using equipment they cobbled together in the basement of Bassin’s house, the original foursome recorded an earlier album that Green described as “very prog-y and heavy with all kinds of random stuff that didn’t need to be there.” They soon expunged it from the web. Afterward, the singer Cameron Winter, their main songwriter, started to create pieces designed for two guitars, so they brought in Hudson. “Once we added Foster, we thought, ‘Wow, we actually sound decent now,’” Winter said.

Over the last few years, the members have spent as much time listening to and talking about music together as making it. Speaking to them is like sitting with the omnivorous lead character from Nick Hornby’s “High Fidelity” times five. “We live in a world of ‘who can listen to the most possible music?’” Green said.

Some of their knowledge comes from scampering down the rabbit hole of the web; some from their parents’ record collections. The fathers of two members have been involved in the music business: Green’s dad is a sound designer who has worked with John Cale; Bassin’s father, who died of respiratory-related issues when the drummer was just 8, was a marketing executive at the music company Alternative Distribution Alliance. “Somewhere in this house there’s a gold Vampire Weekend record,” the drummer said.

As expansive as the members’ musical tastes may be, the time frame they had to record the album in their basement studio was tightly constricted by school commitments and a curfew set by Bassin’s mother: just three hours on Friday nights to cut the music, with a hard out of 10:30 p.m. to avoid disturbing the neighbors. “Fridays, I had school, then track, and then Geese,” Green said, as if the band were another part of the guitarist’s course load.

The pandemic shutdown became a blessing for the group because it allowed time to carefully consider all the label proposals and to practice. “None of that would have been possible if everyone had gone off to college,” Bassin said.

Tim Putnam, who signed the band to Partisan, was taken by the pure spirit the album was created in. “When you write from a place of not thinking anyone’s going to hear your music, it’s very different from thinking that they might,” he said. “It was such a rare scenario.”

For Russell Crank, A&R director of PIAS, the New York history that courses through the group’s music became a draw. “I feel like they’re the next evolution of the New York sound,” he said.

The decision by the band to ditch higher education in favor of a career wasn’t an easy one, especially since its members had been accepted at top schools like Oberlin, the Berklee College of Music and Swarthmore. Hudson and Green say they still want to attend college one day. At the same time, they relish having the platform to not only present their music but to talk about personal topics that are important to them. Hudson has battled deep anxiety and depression. “Struggling with mental illness can be overwhelming,” he said. “But there’s a lot to be said for naming an experience.”

Green, who identifies as nonbinary, only came out to the other members six months ago. “It was a long, drawn-out process, thinking I was someone I wasn’t,” the guitarist said. “Talking about it has given me a new confidence.”

At the same time, a narrative has circulated that characterizes the band as “just a group of five white guys,” said Bassin, who is Asian. “I’m not white and Gus isn’t a guy.”

The group want to make it equally clear that its debut is just a creative jumping-off point. At the Brooklyn shows, it debuted three new songs, and its members say they’ve written scores more that push them in a fresh direction. “When we made this album, we were just 17,” Green said. “We’re 19 now. We’re changing, fast.”