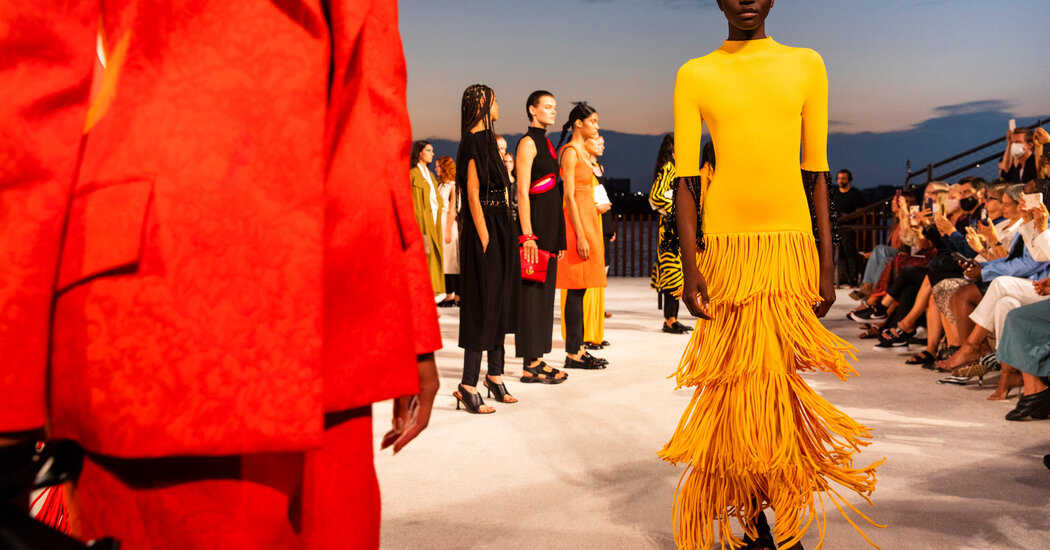 You know something has changed when the biggest celebrity at a fashion show is not Gina Gershon or Nicky Hilton, but Kathy Hochul, the new governor of New York.

Yet as the first New York Fashion Week since February 2020 began and Ms. Hochul took her place in the front row at Prabal Gurung’s show in Robert F. Wagner Jr. Park on the tip of Battery Park, she was mobbed by a stream of selfie-seeking attendees. It was a sign — as if any were needed — that we’re on the verge of a new era.

Shows are back. The audience in most of its gaudy plumage has returned: street-style peacocks in fuchsia sequins stalking the sidewalks in midafternoon. They’re borne through the city in the hushed environs of the black Town Car and then disgorged from the quiet dimness in a clacking herd — despite the fact the footwear of choice is now a fashion Birkenstock or sneaker.

The city itself had a starring role. The skyline acted as the backdrop for Peter Do’s debut show, held at a drive-in in Greenpoint; the verdant hillocks of Little Island and rolling waves of the Hudson River framed Proenza Schouler’s looks; the lights of the city as seen from the observation deck of the Empire State Building twinkled behind LaQuan Smith’s runway.

The general vibe was joy at the chance to be in-person again, with an undertone of inchoate unease. A lot of the crowd was masked, but a lot of it wasn’t (usually the celebrity lot). Face coverings seemed uncomfortably like an accessory, rather than a crucial safety measure.

Everything felt eerily familiar, but also, as Diane von Furstenberg (who did not have a show) said, “very different.” It’s easy to scratch your head and wonder why a fashion show matters. Yet after 20 months of isolation and dressing largely for the kitchen table, this is now, perhaps more than ever in recent memory, a time when the question of what to wear next has real currency.

So what’s the answer?

“You dress for the mess,” Hillary Taymour of Collina Strada wrote in her show notes. Then, amid the scallions and sunflowers of the Brooklyn Grange, the largest rooftop garden in New York, she sent out an exuberant riot of overdyed pastels, oversize cargo pants and upcycled materials, pannier-padded tank dresses and beetle-shaped breastplates, all layered willy-nilly on running, skipping, hand-holding friends of a variety of ages and affinities.

Nature was, predictably, a thing, inspiring the floral-strewn boho-deluxe scarf dresses at Altuzarra and blossom-smudged cottons at Jason Wu, who had one of his best shows in seasons. Mushroom prints were popping up all over.

So was Americana, with Tory Burch offering an ode to Claire McCardell, the godmother of sportswear, in the form of off-kilter shirtdresses, and Brandon Maxwell embracing pink and green and shorts and sweats. Gingham was everywhere, including at Prabal Gurung and at Coach, where it was blown up to mega proportions in a Bonnie-Cashin-meets-skate-style combo.

But the single most omnipresent item was the bra top, on pretty much every runway: in colored glass over a tee at Maryam Nassir Zadeh; in silver sequins under a white tuxedo in a Michael Kors Collection full of lacy dance dresses and shoulder-baring necklines.

And the Possibility of a Return to the Office

They also want a bridge between where we’ve been (swaddled and scared) and where we may be going (back to the office?).

This is what Jack McCollough and Lazaro Hernandez were thinking in their Proenza Schouler show. “It’s a celebration of a newfound freedom that feels slightly fragile still,” Mr. McCollough said of the cropped trousers that curved just a bit from thigh to calf to leave room around the legs, slope-shoulder jackets and fluid trench coats. Also the tunics with a whiff of the New Look and elbow-length sleeves dangling jet bead fringe and long, lean high-neck dresses with four tiers of fringe at the skirt.

But it could apply equally well to Peter Do’s elegant meditation on the shirtdress as a crucial component of the four-part suit, and Gabriela Hearst’s artisanal knits, created in conjunction with crafts collectives in Bolivia, Uruguay and the Navajo Nation, which feed the soul while they wrap the silhouette.

Not to mention Sergio Hudson’s way with proportion, seen in tone-on-tone red trousers with just a bit of flare, matching turtleneck, sweeping greatcoat and belt with a big circular gold buckle. Michelle Obama wore a similar outfit to President Biden’s inauguration and looked like the Washington version of a superhero. It’s one way to make a (re) entrance.

That’s why Moschino’s “baby ladies,” a candy-colored parade of little 1960s miniskirt-lunching suits and pussy-bow shirtdresses in gingham and bouclé festooned with stuffed animals: bunnies and lambies and duckies — plus, for evening, an asymmetric patchwork baby blanket gown with a sleeve replaced by an elephant’s trunk — struck such an odd note.

Levity is a good look out in the world but infantilization, not so much.

For two decades now, there has been something surreal about sitting through a fashion show (or many fashion shows) on Sept. 11. This year it felt especially so, when practically everywhere you looked there were memorials and homages to the fallen and the significance of the moment — except on the runway.

Yet fashion and Sept. 11 are irrevocably linked, with the attack occurring just as New York Fashion Week began, and because the events that moment set in motion shaped what came after. No one knows this more than Rachel Comey, part of the generation of designers whose business was founded the year the towers fell. This week was her 20th anniversary, too.

Eschewing her usual friends ‘n’ family dinner theater, she and the choreographer Beth Gill offered a crowd in constant flux: walking, embracing, undressing, melting off desk chairs and otherwise interacting in graphic printed dresses, elegant black jumpsuits, twinkling culottes and crafty artist’s smocks. It was messy and confusing and hard to figure out where to look. A reminder of life, in its complicated glory.

Thom Browne, speaking from a microphone in the darkness, held a moment of silence in acknowledgment of the day and then unveiled a collection in three acts based on the 1962 short story by J.G. Ballard titled “The Garden of Time.”

First came a trademark ode to the four pieces of the tailored gray suit; next, a meditation on proportion and the power of the missing piece, layering austere tunics with mismatched sleeves atop maxi skirts. And finally, a rainbow of what looked like the simplest T-shirt dresses silk-screened to mimic the drapery of Greek and Roman statuary that turned out not to be printed at all, but rather trompe l’oeil masterpieces built from layers and layers of tulle, each one containing hand-pieced and appliquéd shadows, like a topographical map of memory.

They had an elegiac quality, as did Kate and Laura Mulleavy’s Rodarte show, held in the sculpture-festooned courtyard of the Westbeth Artists Housing complex, with black-and-white slip dresses trailing fronds of lace that caught just so in the breeze and parachute silks looped up behind to billow in the wind. At the end, the models appeared barefoot, in matching silk dresses in shades of cream, from ivory to gold to shell pink, like a host of angels, come to earth. Or a cult, depending on your point of view.

In the end “New York Fashion Week: The Return” closed a bit like a Ryan Murphy mini-series: in a discorama shower of glitz and Technicolor, with very high production values and a star-studded cast that disguised a questionable story line.

Tom Ford took the starring role in Lincoln Center, with a show of bedazzled loungewear cut with a dash of black leather, deep-pile velvet culotte suits and corsetry. There were tank tops spray-painted silver and denim-washed in gold. A finale “bride” wearing 24-karat sweats, a bikini top and a trailing silver trench. It was like the parody version of past career hits filtered through a working-from-home lens and then doused in Swarovski and glittering with the promise We Will Go Out Again.

There’s a growing fault line opening up in New York fashion between the brands that made their names in a time at the end of the last century when the city was shaped by its bonfire of the vanities, and the brands that emerged thereafter.

On one side are those like Mr. Ford and Carolina Herrera, whose youngish new designer, Wes Gordon, is loyal to its sweeping gowns and cocktail puffs.

On the other are those like Vaquera, where Patric DiCaprio and Bryn Taubensee plumbed the tension between the pandemic and the desire to be out in the world, leaning into the damage done — dumping a crumpled foil ruffle, like a remnant from an alternate Miss America pageant over basic gray sweats; splashing the message “Go Away Evil” on a glittering black sweater; crafting evening wear out of what looked like trash bags.

Also Eckhaus Latta, where Mike Eckhaus and Zoe Latta deploy the comforts of ribbed knits like a rug that can be pulled out from under you; strew snaps along the curving seams of stretch tops and trousers and then un-pop the poppers to expose a thigh here, an armpit there, finding the strength within a sense of dislocation and coming undone.

On the fringe no longer, they have expanded fashion week’s boundaries in every sense of the word, dragging it to other boroughs and underground venues; changing the definition of who gets to define dress; recalibrating what matters.

They’re interested less in the hallowed halls of the Met or the linen-covered tables at Cipriani than inequity and the damage done; are accountable not to the Best Dressed List but to the communities they attract.

In the end, that may be the story line that is truly something to watch.