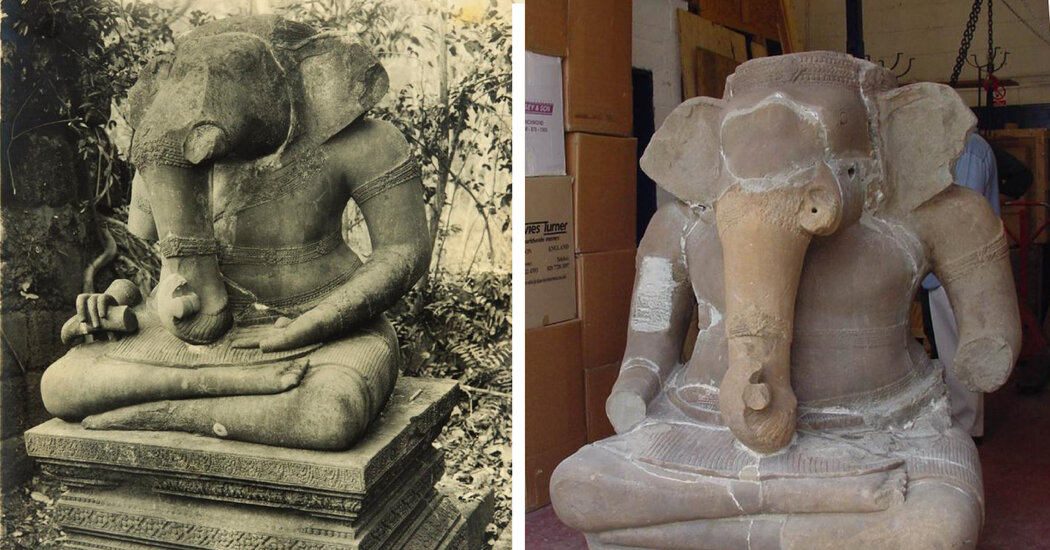 Over a period of five years, James H. Clark, the internet pioneer whose Netscape browser once commanded that market, spent roughly $35 million, he recalled in an interview, to purchase dozens of Cambodian and Southeast Asian antiquities, many of which he used to furnish a penthouse in Miami Beach.

On Tuesday, federal officials announced he had surrendered the collection of 35 items, now valued at much more than he paid, after investigators convinced him that they were all stolen and that he had been duped by a shady antiquities dealer.

A bronze goddess of motherhood with four arms and elongated earlobes. A massive seated elephant deity in stone bearing a crown and an ornamented trunk. A boat prow with a depiction of a half-human bird of prey astride a mythic serpent.

Investigators told him, Mr. Clark said, “my doing this might inspire other people to do the same, but I’m not sure — it’s hard for people to give up something they paid for, but for me, why would you want to own something that was stolen?”

Mr. Clark, who was only identified as a “collector” in court papers filed Tuesday, was described by federal officials as the latest in a line of people taken in by Douglas A.J. Latchford, a British art dealer who died in 2020 while facing charges of antiquities trafficking.

Mr. Latchford, the investigators said, had during the period between 2003 and 2008 persuaded Mr. Clark to purchase the artifacts by providing him “false statements and fake provenance documents intended to hide the fact that the antiquities were the products of looting, and then imported the antiquities through lies on customs paperwork.”

Mr. Clark, 77, a former professor at Stanford who co-founded the Netscape Communications Corporation in 1994, said he had decided to buy the statuary and other relics after travels in Cambodia where he had seen some of the glories of its Khmer Empire, including the 12th-century temple complex at Angkor Wat.

“As a naïve person,” he said, “I had apparently somewhat ignorantly acquired one of the nicest private collections of Cambodian antiquities.”

After the sale of his penthouse, Mr. Clark’s collection had largely been kept for the last 10 years in two South Florida storage units, from which it was taken as part of the seizure by the federal government that he did not contest.

He said he made his decision after reviewing emails, photos and other evidence provided by federal agents who have spent several years investigating Mr. Latchford, who co-authored three books on Cambodian treasures that included images of some of Mr. Clark’s purchases.

The list of items and the allegations against Mr. Latchford were included in a complaint filed by federal prosecutors in United States District Court in Manhattan on Tuesday. In a news release, federal officials made note of the “collector’s” willingness to cooperate voluntarily and promptly.

Mr. Clark said he grew wary of Mr. Latchford, who had come recommended by an interior decorator, in 2008 when Mr. Clark sought assurances about a “beautiful” museum-quality female deity he was being offered for more than $30 million.

The return of the items is part of a global Cambodian effort to recover many hundreds of Khmer-era works that once adorned the nation’s remote temples and shrines. Most of the items were looted during the years of civil war and national upheaval that ravaged the country from the 1970s to the early 2000s.

A year ago, about six months after Mr. Latchford’s death, his daughter, Nawapan Kriangsak, decided to hand back 125 objects he personally owned. In September, the Denver Museum of Art deaccessioned four Cambodian items obtained through Mr. Latchford and agreed to hand them back, while an anonymous private New York collector gave back one item that was considered a national treasure. Cambodia has also been pressing the Metropolitan Museum of Art for the provenance behind at least 45 items in its Southeast Asian collection that it suspects were looted.

Phoeurng Sackona, Cambodia’s minister of culture and fine arts, said she was thrilled that Mr. Clark had cooperated with the return and that the items might one day fill a whole wing of a new national museum. The lawyer representing Cambodia, Bradley J. Gordon, added: “We are thankful for Mr. Clark’s exemplary behavior in deciding to do the right thing and to return these masterpieces. We hope this becomes an example to follow.”

Mr. Clark was philosophical about the monetary loss. “I’m very pleased that they are going to be shown in a museum now where people can really appreciate them,” he said.

In their complaint, officials laid out several methods used by Mr. Latchford to dupe Mr. Clark into believing the artifacts were legitimate. In several cases, they said, he concocted paperwork stating that certain items — among them a bronze seated Buddha and a standing statue of the Hindu deity Vishnu — had left Cambodia legally in the 1960s or had been owned for decades by legitimate overseas buyers.

In the case of the massive statue of an elephant god, or Ganesha, Mr. Latchford claimed he was selling a “near-twin” of a statue that Cambodian officials say is actually one-of-a-kind: a 4,000-pound masterwork that was photographed and publicized by French researchers in 1934.

In an email touting it, Mr. Latchford led Mr. Clark to believe that “the famous published one has disappeared” and that the purported twin “will never be available again, and is fabulous.” Cambodian experts who have seen photos of the sculpture purchased by Mr. Clark say it is in fact the stolen original.

Prosecutors and Cambodian officials say Mr. Latchford obtained the items sold to Mr. Clark from a looting network that had pillaged them systematically for decades and trafficked them through Thailand, where Mr. Latchford was based.

Cambodian officials said they would take custody of 28 of the items, many dating back to the ninth century and the rise of the Khmer Empire. The others belong to India, Myanmar and Thailand, officials said.

Given the value of the items, Mr. Clark said he had wanted to make sure that the evidence of looting and illegal trafficking provided by government officials was persuasive. He recalled a three-hour meeting with investigators where they showed him multiple documents that convinced him.

“I should have been more suspicious,” he said, “and in the end I told them I don’t want any part of this.”