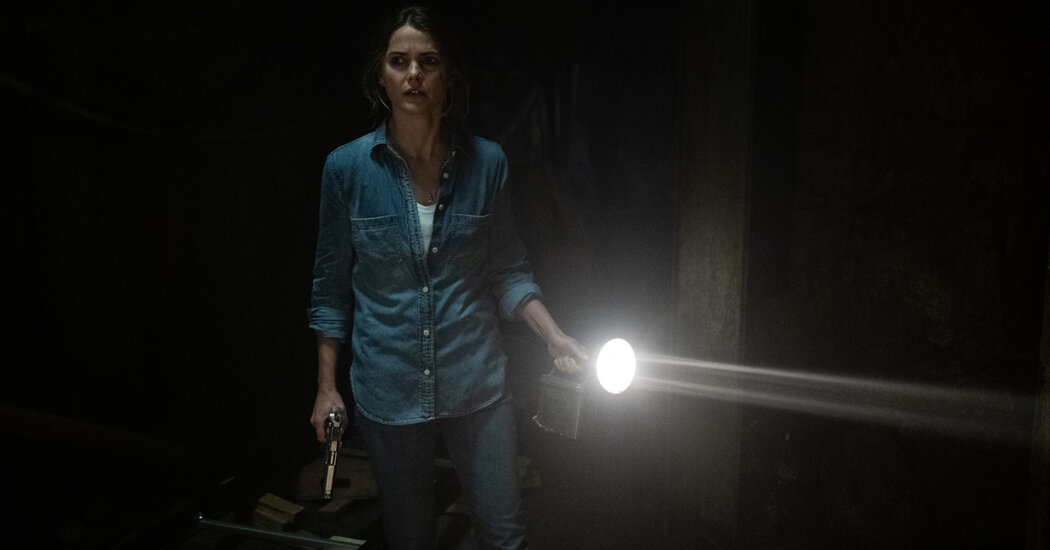 In the new horror film “Antlers,” Keri Russell plays a middle-school teacher in a struggling Oregon town who speculates that one of her students (Jeremy T. Thomas) is hiding a supernatural secret that has something to do with a string of brutal murders. (She’s right.)

Scott Cooper, the director of “Antlers,” which is currently in theaters, had no reservations about showing the film to his daughters, ages 15 and 18, even though there’s gore galore in its depiction of a ravenous wendigo, a creature with roots in Native American folkloric traditions.

Rather, he showed it to them because he knew the horrors it depicted — like opioid addiction and the environmental effects of mining — would pale in comparison to what they’re already scared of: the downward spiral of the natural world outside their front door.

“When you live in California, you’re confronted with climate change and drought on a daily basis,” he said. “They’re acutely aware of what it’s doing and what their future is. My girls understand that my film is a metaphor.”

Humankind’s catastrophic relationship to nature and nature’s revolt against the human body are more than horror story plot devices. They also carry on the tradition of folk horror, a genre with origins largely in British cinema that mainstream American audiences recently got a taste of in Ari Aster’s “Midsommar” and Robert Eggers’s “The Witch.”

Generally the films take place in a rural environment and engage with folk customs and ancient belief systems. The stories are mostly about clashes: between insiders and outsiders, city and country, technology and the analog and modernity and an idyllic past (unless you were a witch). Folk horror wonders if the old ways were right.

As the folk horror scholar Adam Scovell wrote, the genre is about “the evil under the soil, the terror in the backwoods of a forgotten lane, and the ghosts that haunt stones and patches of dark, lonely water.”

This fall, “Antlers,” from the Disney division Searchlight Pictures, joins other new, mostly indie folk horror films from around the world. There’s “The Old Ways,” a possession story set in a Mexican village; “Demigod,” a supernatural tale set in Germany’s Black Forest; “The Medium,” about a Thai shaman and a demonic entity; and, opening Nov. 19, the Welsh-language film “The Feast,” about a phantasmal dinner party.

Howard David Ingham, the author of “We Don’t Go Back: A Watcher’s Guide to Folk Horror,” said one of the reasons folk horror is so pertinent now is because, whether it’s the pandemic or politics, “there’s a sense that we’re being haunted by a whole lot of unresolved business.”

A Fall Guide to TV and Movies

Not sure what to watch next? We can help.

“Are we scared our neighbor is secretly a witch? Probably not,” Ingham wrote in an email. “But it’s absolutely a metaphor for what we’re experiencing, how the fault lines in our society are manifesting themselves.”

Labeling folk horror as a genre didn’t take off in earnest until 2010, when it was used in the BBC documentary series “The History of Horror” to describe three British films fans now call the Unholy Trinity: “Witchfinder General” (1968), starring Vincent Price as an inquisitor; “The Blood on Satan’s Claw” (1971), about demonic rituals in 18th-century England; and “The Wicker Man” (1973), about a pagan community on a remote Scottish island.

In the 1960s and ’70s, American audiences got a feel for the genre in a film like the H.P. Lovecraft-inspired occult drama “The Dunwich Horror,” but also in an absurd exploitation film like “The Manitou,” a tale of demonic body horror, and in experimental cinema, like “Ganja & Hess,” a Black vampire tale. The folk horror films of this era weren’t considered part of a genre; filmmakers were simply using horror to reflect the environmental, racial and spiritual changes around them.

Later, American directors tapped into folk traditions in popular movies like “Children of the Corn” (1984) and “The Blair Witch Project” (1999). In the past decade the folk horror label has stuck, and the genre has garnered a devoted following and critical acclaim, thanks to films like Jayro Bustamante’s “La Llorona,” and especially the works of Ben Wheatley (“In the Earth”)

Although there are rich folk horror cinema traditions around the globe, folk horror films have been mostly made by white men, often about white people’s anxieties. A filmmaker who doesn’t come from the culture they’re exploring, said Janisse, “is going to have to be able to explain how it’s suitable for them to make the film in today’s climate.”

Cooper, who is not Native American, said he was conscious of his status as an outsider, which is why he consulted experts in wendigo folklore and Indigenous histories of the Pacific Northwest to “tell my story without feeling like I was co-opting their legend.”

For filmmakers working within their own folk traditions, there’s nothing scary about creatures or ancient beliefs because they are baked into their culture. Valdimar Johannsson, the director of “Lamb,” a new Icelandic film about a couple’s animal-child, said Icelanders understand their folk history “as a normal thing, and don’t consider it to be supernatural or horror.”

At Anthology Film Archives, “Folk Horror,” a new series organized by Jed Rapfogel and Jennifer Anna, explores the genre’s narrative and global scope. The program, which continues through Nov. 11, includes what may be a surprise: “Get Out.” But Jordan Peele’s film checks off two foundational folk horror themes: isolation and landscape, in this case an upper-class white suburb where an island mentality leads to social violence.

In “Get Out,” Rapfogel said, “the past is not the past, and things of the past are reappearing in horrific ways.”

That’s one of the reasons folk horror shows no signs of wilting. As long as humans mess with Mother Nature and keep regenerating old hatreds, horror will hold up its mirror.

“We might be watching stories of human sacrifice, of ghostly visitations, of witches’ sabbats,” Ingham said. “But in a broad sense there’s something in a folk horror film that makes us think yes, it’s like that.”