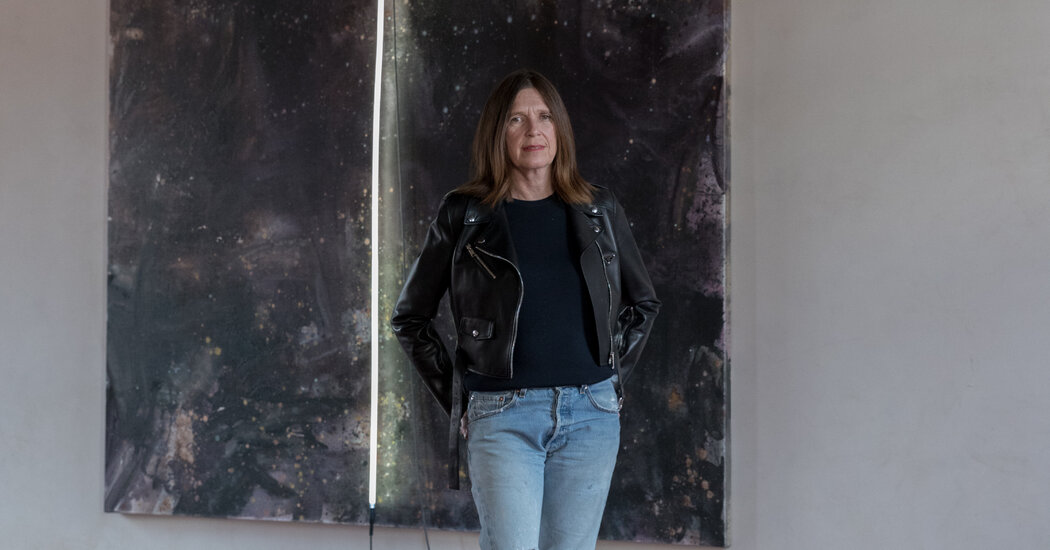 VENICE — It is the kind of horrific painting that makes you want to look away: Titian’s “The Flaying of Marsyas” depicts a satyr — half man, half goat — hanging upside down as he is skinned alive, while a dog laps up his blood and a musician impassively plays the violin.

But the artist Mary Weatherford wanted to keep looking.

Captivated by the work after seeing it in Antonio Paolucci’s exhibition, “Tiziano,” at the Scuderie del Quirinale in Rome about a decade ago, the Los Angeles-based Weatherford resolved to one day make a body of work based on the painting. Now, that show — featuring 12 new canvases that Weatherford produced between January and March 2021 — opened Wednesday at Museo di Palazzo Grimani, just as the Venice Biennale begins.

“I thought it was the most evil painting I had ever seen,” Weatherford said in an interview at the palazzo. “Marsyas is resigned to his fate. My works have been dealing with fate since 1986. I’m interested in the choice of whether to turn left or right.”

Dressed simply in a black sweater and ripped jeans, her straight hair parted down the middle, Weatherford may appear more understated than the spritz-drinking art fashionistas crowding the Giardini. But at 59 years old, with prominent galleries behind her — Gagosian, which organized the show, and David Kordansky — Weatherford actually represents something quite rare in today’s overheated contemporary art market: a middle-aged, midcareer female artist who has slowly, quietly earned her share of fame.

“Mary is like one of Joni Mitchell’s ‘Ladies of the Canyon,’” said Kordansky, referring to the song about a community of artists and musicians. “She’s totally, completely brilliant and unfazed by trends. She’s just always been doing her own thing.”

That “thing” has been making lyrical abstract paintings often punctuated by neon rods, which are now in the collections of the Museum of Modern Art in New York, the Los Angeles County Museum of Art and the Tate in London — and which have sold for as much as $450,000 at auction in 2018. That year, the critic Roberta Smith, writing in The New York Times, called the works “ecstatic, pierced by beams of light, similar to Bernini’s ‘Ecstasy of St. Theresa.’”

Weatherford has had surveys in 2020 at the Tang Teaching Museum and Art Gallery at Skidmore College, in Saratoga Springs, N.Y., and at SITE Santa Fe, N.M., as well as solo exhibitions at the Aspen Art Museum and LAXART in Los Angeles. “Mary is unsatisfied in the best sense,” said Ian Berry, the director of the Tang. “She’s a researcher who digs into art history, science, architecture, gender.”

Those familiar with her work comment on Weatherford’s technical exactitude — the particular linen she uses for her canvases, the gestural nature of her brush strokes, her layering of gesso.

“There is something very specific about how she applies the paint,” said Nicola Lees, director of the Aspen museum. “It has such a playful quality to it, but it’s very precise.”

While Weatherford’s paintings often feature swirls of color, the Marsyas works — on view through Nov. 27 — are shadowy and somber, with dominant tones of black, gray, violet and silver.

With the Titian painting, which typically resides in Archbishop’s Palace in Kromeriz, Czech Republic, she wanted to ponder the thorny questions that it raises, given that Marsyas challenged Apollo to a musical competition, knowing he was likely to lose and pay a terrible price.

“Is Marsyas ignorant or does he have hubris?” she asked. “What’s the difference between ignorance and hubris?”

Weatherford often waxes philosophical in conversation. With an unvarnished, personable manner, her references veer from the writers Iris Murdoch, Haruki Murakami and Leo Tolstoy to the films “The Godfather” and Luis Buñuel’s “Un Chien Andalou.”

Born in 1963 in Ojai, Calif., where her father was the vicar of a small Episcopal church, Weatherford has been making art since she wove macramé with her mother at the kitchen table. She fell hard for museums on a school trip to LACMA. “I loved the smell, I loved the sound,” she said, “I loved everything about them.”

She was particularly intrigued by van Gogh’s “Wheatfield With Crows,” because of its menacing sky and hovering birds. “I thought to myself, ‘OK, I’m going to have to understand why this is a frightening painting.’”

As an undergraduate at Princeton University, Weatherford traveled into New York City to see art, visiting the galleries of Holly Solomon, Leo Castelli, Paula Cooper and Annina Nosei. Thinking she needed to pursue something “practical,” she planned to major in architecture, when a painting course taught by the professor Jerry Buchanan changed everything. “I was an immediate convert,” she said.

After college, Weatherford joined the Whitney’s program in museum studies. In the meantime, she made drawings in her Upper West Side studio apartment and attended art lectures.

In 1990, The Times featured Weatherford in an article headlined, “Fresh, Hot and Headed for Fame, These Are the Faces to Watch.”

“Her determination to turn abstract painting into a crossover art form, infusing it with both feminist consciousness and references to the performing arts that are fraught with feminine stereotypes, is full of possibilities,” Smith wrote.

Weatherford said she wasn’t prepared for the attention that came. Moving back to California, she did some teaching at U.C.L.A. and Otis College of Art and Design, but found “I couldn’t paint and teach,” she said. “The teaching would take too much out of me.”

So she did bookkeeping to earn a living — first for the Santa Monica Museum of Art and then for the artist Mike Kelley. “I love accounting because it’s like a chemical equation,” Weatherford said. “I love astrophysics.”

She worked in an office four days a week and at her easel the other three, likening this to playing roulette. “I just slid all the chips onto one number,” she said. “I always made the choice to make the time to make the paintings.”

Her 2012 show at the Todd Madigan Art Gallery, at the California State University in Bakersfield, “changed everything,” Weatherford said, earning her more attention from critics and collectors.

Describing her as Dan Flavin meets Helen Frankenthaler, the art collector David Gersh — who with his wife, Susan, owns one of Weatherford’s pieces — said the artist has “developed her own vocabulary.”

Yet, solid as it now seems, Weatherford’s art career was not something she ever really planned or could count on. “I only really started selling paintings when I was 50,” the artist said, adding, “I just want to be a good painter.”

“It feels good to be this age because I don’t worry it’s going to go away and wonder how I’m going to make a living,” she continued. “If one has success young, that’s a specter.”

Late success has also freed her up not to worry about staying popular or pleasing audiences. Komal Shah, who is on the board of the San Francisco Museum of Modern Art and collects Weatherford’s work, said she admires how the artist continues to challenge herself. “She is becoming an heir apparent to Joan Mitchell,” Shah said. “Success has not come easily to her, and she has established herself as a painter of gravitas.”

Part of what drew Weatherford to the Titian painting was how it at once attracted and repelled, embodying life’s often painful complexity. She has tried to capture this nuance in works such as “Below the Cliff” and “Light Falling Like a Broken Chain” — both of which were featured in a Kordansky show in 2021. “The sublime is the marriage of horror and beauty,” she said. “It’s like going up the river.”

If there is an underlying darkness in her work, Weatherford said, that’s because there is an abiding sadness in the world. “It’s fleeting and I can’t stop time,” she said. “Even here in Venice, I look out the window at a boat going by on the water and I think, ‘This is the only time we’ll ever see that boat go by.’”

CNBC’s Jim Cramer on Tuesday warned investors not to assume that the Federal Reserve will engineer a soft landing for the economy. “Fair-weather bulls, who all believed we were headed…