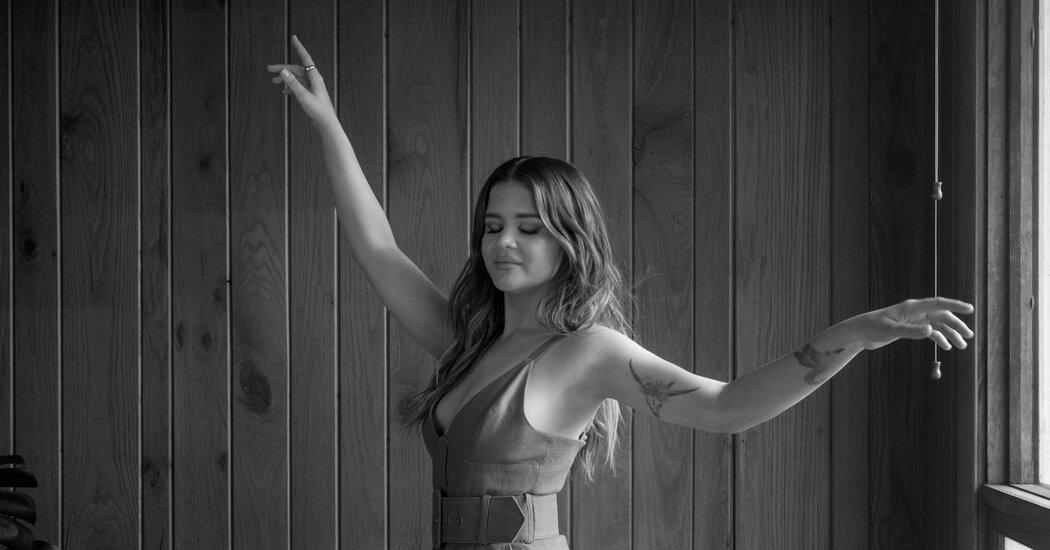 NASHVILLE — It was always supposed to be when, not if, for Maren Morris’s permanent pop crossover.

A Nashville songwriter from Texas-turned-irrepressible country headliner, Morris was, from the jump, as fluent in the Spice Girls and Beyoncé as she was in the Dixie Chicks and Patty Griffin. She was also a tattooed, spray-tanned, nose-ringed liberal firecracker who posed for Playboy — arguing, hey, Dolly did it — in a stubbornly old-fashioned town especially discriminating about its female stars.

When Morris did dip a stiletto into the Top 40 metaverse not long after her breakout debut album, lending her missile of a voice to “The Middle” by the EDM maestro Zedd in 2018, the result was beyond affirmation: The track became a ubiquitous, multiplatinum smash, with Morris’s emphatic “bay-bay!” alone proving her mettle in the pop firmament.

Then came the plot twist: She may have been a sly traditionalist all along.

Morris followed “The Middle” with her second album, “Girl,” from 2019, which sounded sleek but not shiny and birthed a slow-burning supernova of its own in “The Bones,” a sturdy No. 1 record across adult contemporary and country radio stations alike. She also joined the Highwomen, a country supergroup featuring Brandi Carlile, Amanda Shires and Natalie Hemby.

Morris’s new album, “Humble Quest,” out March 25, is a tripling down on those roots — an intimate, homemade singer-songwriter showcase that forgoes bells, whistles, 808s and genre-stretching ambition for its own sake. Having dug her heels in on Nashville as home, both literally and musically, Morris seems to have realized in real time that the most rebellious way to be a young female country singer was to insist on staying a country singer. Nashville would just have to get used to her.

“I think I got enough of my fill,” Morris, who is 31 and adheres to levelheadedness like it’s a religion, said recently on her ample back porch, recalling the success of “The Middle” — more than one billion streams, Top 5 on the Billboard Hot 100, Grammy nominations for record and song of the year. “I thought of that movie ‘Josie and the Pussycats,’ where it happens literally overnight — it felt like that.”

“This was massive,” she recognized, but maybe not sustainable. “I think I’m ready to go back and do my own thing.”

The last two years, in ways both cosmic and close at hand, happened to lend themselves to an artistic recentering, not sprawl. In late 2019, one of the singer’s closest collaborators, the producer known as busbee, died soon after being diagnosed with a brain tumor. Then, in March 2020, as the coronavirus pandemic reached the United States in force, Morris gave birth to her first child, leading to a postpartum depression that may have been impacted by the broader circumstances as well, she said.

With live shows and studio sessions on hold, Nashville was also being spiritually upended by the racial justice protests around the country, which landed especially hard in communities and industries that had long avoided obvious issues. Morris released a one-off protest song (“America, we’re better than this”) and, that November, used her acceptance speech for female vocalist of the year at the CMA Awards to spotlight the work of Black women in the genre. “They are as country as it gets,” she said.

Through parsing her own usefulness as an activist and learning to reject what she called Nashville’s “scarcity complex” among female performers in favor of community, Morris found her footing again.

“I am grateful that she stayed in Nashville — we need her,” said Hemby, Morris’s friend, bandmate and frequent co-writer. “She’s a pillar in our community.”

But “Humble Quest” does not seek to hide the hybrid nature of Morris’s gifts as a soulful, R&B-obsessed hook machine and a storyteller in a Southern tradition. Instead, she deploys the pop arsenal available to her in unexpected ways, collaborating with a familiar Nashville stable but also the songwriters Sarah Aarons, the voice behind the demo for “The Middle,” and Julia Michaels, who has worked with Selena Gomez, Gwen Stefani and Britney Spears.

Still, Morris hasn’t so much as tried recording a true “pop banger” since “The Middle,” she said, even turning down other offers to collaborate and telling herself “that I wasn’t going to go back into that lane unless it was as good or better than what Sarah wrote.”

Aarons, who is credited on the new album’s acoustic, twangy “Detour,” said the pair’s previous sensation hardly comes up. “We laugh because it’s so funny that that happened to us — like, ‘Remember when we wrote that song that every person and their child on the planet can sing?’” But the track has been neither a touchstone nor a millstone. “All we do is eat cookies and write songs,” Aarons said.

After helming three songs on “Girl,” Greg Kurstin, a studio partner known for music with Adele, Foo Fighters and Paul McCartney, produced Morris’s entire new album, including the playful, John Prine-esque “I Can’t Love You Anymore” and the wedding-ready ballad “Background Music.” (Also prevalent in the liner notes: Morris’s husband, the country singer Ryan Hurd, with whom she landed her first-ever songwriting cut in Nashville years ago, when they were both in other relationships.)

Kurstin had never made an entire country record before, and he requested a primer of recent favorites from Morris and Hurd; the couple recommended albums like Miranda Lambert’s “Revolution,” Eric Church’s “Chief” and Lee Ann Womack’s “There’s More Where That Came From.”

Together, at Kurstin’s bedroom-sized studio in Hawaii and Sheryl Crow’s more spacious barn setup in Nashville, they leaned into the organic sounds of live instrumentation and “letting the songs breathe,” Morris said, with obvious pride at having pulled a Grammy-winning producer of the year into her world.

“That was definitely my first dobro in a session,” Kurstin said.

For Morris, “Circles Around This Town,” the album’s opening track and first single (written with Michaels, Hurd and Jimmy Robbins), is pure autobiography — a pop-country song about moving to Nashville and wanting so badly to write popular country songs. In the lyrics, she even drops a winking reference to the initial hits that established her name in town, “My Church” and “80s Mercedes,” hoping to channel some of that earlier, blithe confidence.

“I was like, ‘Where’s this girl been?’” Morris said of the song’s writing process, a turning point that helped to break her out of a lingering 2020 funk. “It was so refreshing.”

Ultimately optimistic and zoomed-in, with tributes to her son (“Hummingbird”) and husband (“Tall Guys,” among others), the album does not dwell on her recent upheaval. But Morris’s path to becoming a utilitarian superstar, steady atop her platform, is encapsulated economically on the title track, “Humble Quest,” when she sings, “I was so nice till I woke up/I was polite till I spoke up.”

Vocal and forthright, though not always flawless, on issues of equity in Nashville, gun control and the casual use of racist language by the country superstar Morgan Wallen, Morris has been praised as a risk-taker in the face of the genre’s circled-wagons orthodoxy. But she has also been dinged as overly self-assured from both sides, and sought to document on her album the all-purpose humbling she has received from the universe in recent years.

“Knowing that I’m not the educator was a big pill to swallow,” Morris said, recalling how she chimed in amid the Wallen uproar, and then maybe wished she hadn’t. “Twitter is such an enticing app because it’s like, ‘Oh, it’s so warm in your pocket — the whole world. I can immediately shoot this off.’ And yeah, I just cringe sometimes when I’m like, ‘oh God, like, did that need to be in a tweet?’”

“I just know that my allyship has to be more proactive and not reactive,” she added.

Change has come to Nashville in recent years, though “it’s not moving nearly fast enough,” Morris said. “I think there’s crumbs that are given out to people to make it feel like there’s progress. But once you’re awake to it — how the system protects itself — you can’t close your eyes again. So you kind of have to be the squeaky wheel.”

She tries to keep in mind a big question: Are you willing to burn down the system that serves you? To demonstrate Nashville’s chumminess, Morris pointed out that her husband was a writer on one of Wallen’s singles, while an early Wallen EP featured a song written by her.

“I’ve had the matches,” Morris said. “But I feel like it’s not going to be in a tweet, it’s going to be with my own actions and decision-making.”

At the same time, the singer’s success outside of Nashville has likely insulated her from the whims of traditional gatekeepers like country radio and award shows; in many ways, they may need her more than she needs them. (Even Morris’s protest song, “Better Than We Found It,” was nominated for best country song at this year’s Grammys.)

Morris was one of the first country singers to see success on streaming platforms, opting to take her first singles straight to Spotify before even signing with a label. With that foundation, plus “The Middle” and “The Bones,” she has become familiar to radio programmers, playlist curators and fans across category boundaries.

“They know her voice,” said Janet Weir, Morris’s manager. “She’s always going to have a unique career — it’s not going to follow just a country pattern or a pop pattern, it’s a journey that covers all genres over time.” Having come this far, longevity is now the play.

At a day of album promo shoots at a riverside Airbnb in December, Morris was low-key at the center of her own revving machine, which included eight women — one making TikToks — and a cameraman.

Pocket-size but with alpha presence, like a country music Mighty Mouse, the singer was joined by her husband and her son, Hayes (before nap time, at least), for the shooting of family photos, music videos, acoustic performances, radio station shout-outs and other content that will power another album cycle.

“I know — this job sucks!” Morris cooed to her toddler as Hayes reached the limit of his gameness.

Her patience, on the other hand, felt inexhaustible, and it was Morris’s own understated resoluteness that seemed to dictate the tone of the day despite her hardly making a single demand. An exception came during a quiet moment, when the speaker providing an ambient soundtrack cycled to Nicki Minaj and Beyoncé’s “Feeling Myself,” shifting the frequency of the cozy, domestic scene toward something more boisterous.

The ill fit was palpable, but no one mentioned it until Morris did.

“Can we get some Carole King on?” she asked. It wasn’t a question.