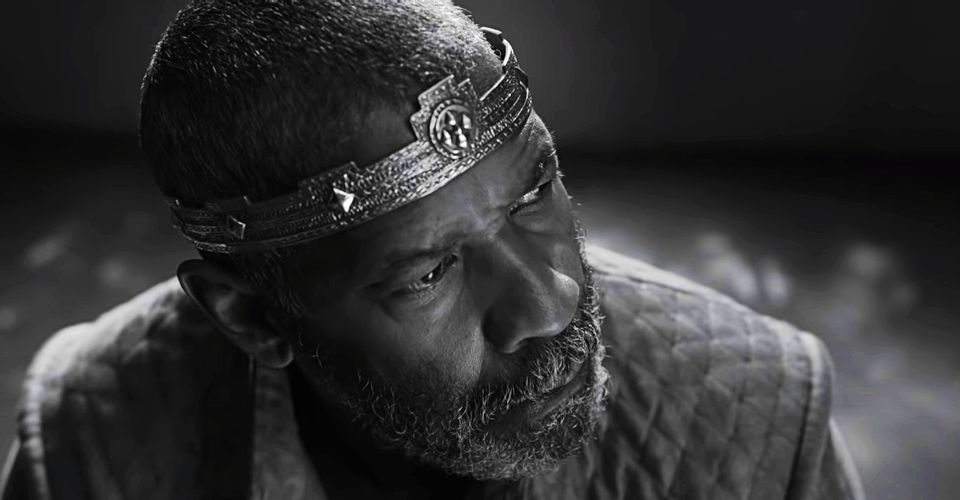 In a sharp essay at the Weird Fiction Review, critic Matthew Pridham makes the case for placing William Shakespeare’s Macbeth into the horror genre of fiction. Beginning with Titus Andronicus, Pridham argues, Shakespeare was fascinated by ways to “show humanity at its worst. These visions depended on depictions of cruelty, agony and alterity.” Pridham then quotes Shakespeare scholar Harold Bloom, who argued that some Shakespeare is so gothic and bloody and occult that it is “the Shakespearian equivalent of what we respond to in Stephen King and in much cinema.” Witches, murder, hallucinations, ghosts—Macbeth has all the elements of the horror genre.

In its newest film adaptation, the Scottish play also has another influence: film noir, the postwar style of filming that featured crimes, shadowy, morally compromised characters—including nasty, duplicitous women known as femme fatales—and often violent, bloody endings. Directed by Joel Coen in a rich black-and-white that seems to have come from the 1950s, Macbeth uses the sharp angles, intense close-ups, and geometric lighting of noir to tell the story of the ambitious 11th-century Scottish warrior who killed his own king in order to take the throne. Macbeth’s mind unravels as he tries to control the fallout from his evil act. He is militarily defeated, then beheaded and replaced on the throne. It’s like a medieval precursor to Double Indemnity or Body Heat.

It also has a lot in common with All the President’s Men. When thinking of modern, Washington-based political thrillers, the mind often conjures images of Congress, the White House, and contests over power, but what is arguably the best D.C. political movie, All the President’s Men, is pure noir. Many scenes in the film are absolutely saturated in shadow. The Watergate burgers are like the ever-shrinking loyalists to Macbeth, who in this case is Richard Nixon.

Macbeth is brilliantly played in the new film by Denzel Washington. A proud Scottish general, Macbeth is encouraged and outdone in his ambition by his wife, Lady Macbeth (a strong Frances McDormand). After the King, Duncan, hears the news that his best generals, Macbeth and Banquo, have defeated two invading armies, Macbeth is named the thane of Cawdor. Yet—as is the case with most politicians—it’s not good enough. Macbeth has heard a witches’ prophecy that he himself will be king and becomes possessed by reckless ambition. The Macbeths plot to murder Duncan in his sleep so that Macbeth himself can gain the throne. The sets on this Macbeth are very spare, like a modernist stage mounting of the play. There is an intentional artificiality to the sets, which ironically intensifies the realism. Just as the more abstract film noir settings can tap into an archetypical consciousness with sharp lines separating good and evil, Macbeth seems to live in a world outside of any particular time but deep within the human soul and its primal knowledge about evil.

At first, Macbeth has doubts about the plot, but when he expresses them, he is taunted, belittled, and ridiculed by his power-hungry wife. Lady Macbeth taunts her husband, telling him he’s not a man unless he murders the king: “When you durst do it, then you were a man; And to be more than what you were, you would be so much more the man.” When, after the regicide, Macbeth begins to imagine he is seeing ghosts, Lady Macbeth attacks: “You do unbend your noble strength, to think so brainsickly of things.” Then she calls him a coward: “My hands are of your color, but I shame to wear a heart so white.”

In film noir, bad guys are often women: Phyllis Dietrichson in Double Indemnity, Kathie Moffat in Out of the Past, Gilda Mundson in Gilda, Brigid O’Shaughnessy in The Maltese Falcon. The 1960 noir Gun Crazy was originally titled Deadly is the Femme Fatale. These women are not the sinless saints of modern #MeToo movies. They are brilliant, conniving, sarcastic, and sometimes downright evil. In other words, much more like real people.

This is an especially necessary tonic given the current “Mary Sue” issue in Hollywood. A Mary Sue is a female character in film who has no flaws or weaknesses. It is a problem in the Marvel superhero movies, particularly the film Captain Marvel, so much so that the Marvel Cinematic Universe, or MCU, has been dubbed by some critics the “M-SHE-U.” The most glaring example in recent years was Rey, the young female hero of the new Star Wars movies, who was so adroit at every task she was presented that it made the films dull. Earlier in the Star Wars saga, Luke Skywalker himself lost a hand in a bloody battle he loses. Rey never struggled with such failures. Making a female protagonist a Mary Sue is ironically infantilizing, rendering the character more innocent and virtuous than any normal adult.

Although written five centuries earlier, many of Shakespeare’s female characters are strong-willed, witty, and able to match language with their male counterparts—yet they are also imperfect, flawed, and fully human. Considering the atmosphere of Elizabethan England, when women were much more restricted than they are today, it’s remarkable how complex these female characters are. There is Rosalind from As You Like It, who dominates the play and surpasses the male characters in terms of intelligence. Or Beatrice in Much Ado About Nothing, who won’t marry because she doesn’t think anyone can measure up to her, and who verbally spars with her lover Benedick throughout the play. (The film version of this play also features Denzel Washington as Don Pedro.)

In the new Macbeth, Frances McDormand’s Lady Macbeth is sneaky, conniving, and ultimately evil. Yet she also shows affection and love for her husband. She is after power, of course, but McDormand also plays the role of a fearless partner to a man whom she wants to achieve the crown that he is worth. She is, as played here, more than one-dimensional.

Still, as good as Frances McDormand is, in this Macbeth, it is Denzel Washington who is the center of the action. One of the most charismatic movie stars of all time and one of our greatest actors, Washington shrewdly underplays in the lead role. Some critics have not liked that, arguing that Macbeth is a scene-eating part. Yet as he has shown in films like Training Day and Fences, Washington is fantastic at conveying an outwardly calm demeanor while a spiritual and psychological volcano slowly builds to eruption underneath. He is absolutely magnetic here, equal parts child, monster, and modern politician. Washington’s understated delivery of the “life is a tale told by an idiot, full of sound and fury and signifying nothing” soliloquy conveys the dread of someone who has sold his soul for a chance at power—who, like characters in most noir and horror films, has listened to bad advice from occult sources. It’s the despair of someone being dragged into hell.

Such stories will always be necessary, but they are rarely told today.