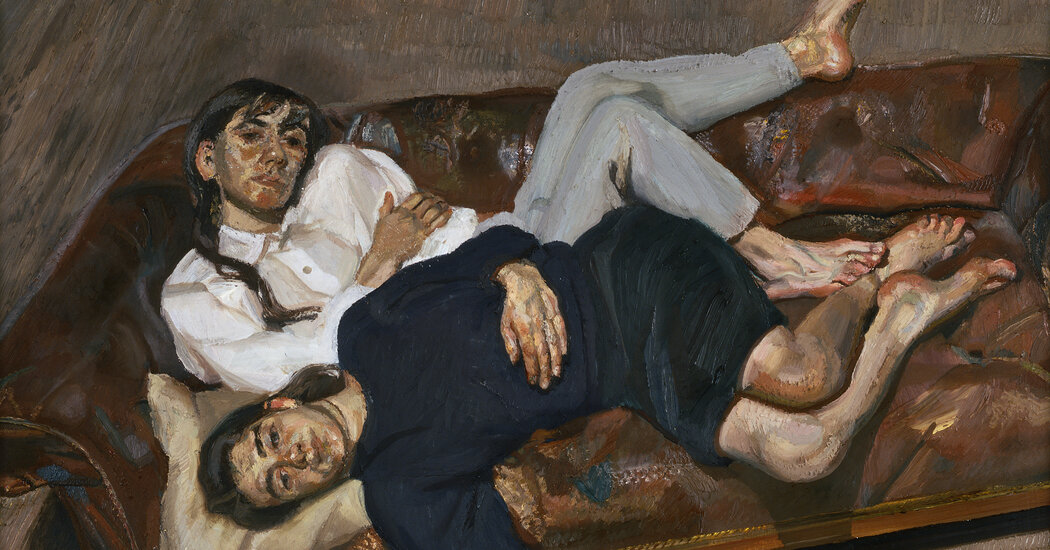 LONDON — When the National Gallery staged a show of Gauguin portraits in 2019, it took pains to highlight aspects of the artist’s personal life: The writing on the entrance wall stated that he had “repeatedly entered into sexual relations with young girls, ‘marrying’ two of them and fathering children.” These aspects had barely been mentioned in previous Gauguin shows, and the museum was making amends.

The National Gallery has just opened an exhibition of work by the British artist Lucian Freud to mark the centenary of his birth. And it has chosen to take the opposite course.

Rather than delve into the biography of Freud — who had countless lovers and at least 14 children, some of whom posed naked for paintings that are in the show — the museum avoids focusing on his life, which has been abundantly chronicled in books and the media. Addressing claims that Freud overpowered his models, the exhibition catalog notes that people posed willingly for him for months, and rebuts charges that misogyny and voyeurism lie at the heart of his art.

Freud’s celebrity as an artist has “overshadowed his work,” the exhibition curator Daniel F. Herrmann writes in the catalog. “For a long time, biography has been the main lens through which his art has been assessed.”

People’s views of Freud’s art have been colored by “his fame, his name, his rambunctious and difficult life — difficult as in complicated,” Herrmann said in an interview at the museum. It was time to start “really looking at the paintings.”

There are 63 works in the exhibition, spanning seven decades. Freud (the grandson of Sigmund Freud) moved to England with his family in 1933 to escape Nazi persecution and became one of Britain’s foremost painters. He died in 2011, age 88.

Inside the World of Lucian Freud

Lucian Freud recast the art of portraiture and offered a new approach to figurative art with stark and revealing paintings of friends and intimates.

The painter’s personal life is briefly summed up on the first gallery wall. He was “resolutely unattached to the point of self-proclaimed ‘selfishness,’” it says, and “rejected anything that might interfere with his independence, including monogamy in his relationships or traditional roles of parenting.”

The primacy of art over all aspects of Freud’s life quickly becomes clear. Everyone in his entourage is fodder for the canvas.

On a wall by itself, “Large Interior, Paddington” (1968-69) shows a much younger daughter: a sad-looking, semi-naked little girl lying in an almost fetal position, one hand between her tightly closed legs.

In the catalog, Mr. Herrmann describes posing for Freud as a product of mutual consent. The process, he explains, sometimes involved hundreds of hours of sitting, as well as food, conversation and conviviality, and was a tacit “contract” between the artist and the sitter.

Freud’s underage child would not have been in a position to offer her consent, or to enter into such a contract. His older daughters, on the other hand, were.

One of them, Rose Boyt, described the experience of posing naked for her father when she was about 18, on the occasion of a 2019 exhibition of photographs she took of him in his studio at in 2019. In the catalog for the show, at Ordovas Gallery in London, she recalled sitting for three or four nights a week — often until dawn — and having difficulty getting Freud to stop painting so that she could take breaks.

“How did I feel about sitting? Angry and exhilarated, outraged by the terms and conditions, honored to have been chosen,” she wrote. “Just to spend time with him was inspirational.”

One memorable presence in the National Gallery exhibition is Sue Tilley. She was an unemployment benefits supervisor in the 1990s when Freud painted her in four works now considered among his best, including “Benefits Supervisor Sleeping” (1995), which sold at auction in 2008 for $33.6 million, then a record for a work by a living artist.

Two such works are in the show, including “Evening in the Studio” (1993): an interior scene with a young woman sewing, a whippet snoozing and a large naked figure — Tilley — splayed across the floor with her legs apart.

When the feminist art historian Linda Nochlin first saw it at the Metropolitan Museum of Art, she pronounced it “truly horrible.”

The artist “lets us know in no uncertain terms what he thinks of women who are no longer ‘girls’ and have the temerity to take their clothes off in front of him,” she wrote in a 1994 Artforum review. “In Freud’s simple-minded taxonomy, an old woman, or a fat woman, can only be grotesque.”

In an interview, Tilley recalled that Freud chose her pose, and she held it during nightly sittings over a nine-month period. She still dislikes the result, but it was paid work, to supplement her salary, she said, and “a painting by a fantastic artist.”

Freud was very strict with models: no hair dye, no makeup or nail polish, and no tans. “His mission was to paint human flesh and bodies in the best way he possibly could,” Tilley explained. Asked to rate the experience, she gave it “about a nine-and-a-half out of ten,” and said it had afforded her “lots of exciting opportunities in life that I would never have had before,” such as exhibitions of her own art and a fashion collaboration with Fendi.

Pilar Ordovas — the gallerist who hosted Boyt’s photography show — said she thought it was “a very simplistic” way of analyzing Freud’s work to say, “‘Oh, now it’s #MeToo, so let’s look at how he painted women.’”

“We’re looking at art through social issues of today, and I think it’s actually a one-dimensional reading,” said the gallerist, who met Freud when she was working at Christie’s and saw him regularly until his death: for breakfast, or lunch, and when his works came up in auctions or exhibitions that she collaborated on.

Martin Gayford, a British author and critic who posed for Freud’s portrait “Man With a Blue Scarf” (2004) and wrote a book about it, said misogyny was an unfair criticism of Freud, because he depicted men just as harshly, and “regarded himself as a feminist.”

He was “trying to see things truthfully, as they really are,” said Gayford, who recently coedited a compilation of Freud’s letters.

The exhibition is staged a few rooms away from some of the world’s finest old master paintings, and on the very spot where a Raphael retrospective was held. It is as if Freud himself were entering the canon and leaving his tumultuous reputation behind.

Herrmann, the curator, said Freud was very often described as the painter with “the cruel eye or the unrelenting gaze. There’s a language that suggests a certain amount of oppression.” He said he hoped that visitors to the exhibition would encounter “lots of different questions that haven’t been asked before.”

“It’s a wonderful opportunity,” he added, “to reassess how we have been thinking about Freud so far.”

Lucian Freud: New Perspectives
Through Jan. 22, 2023, at the National Gallery, in London; nationalgallery.org.