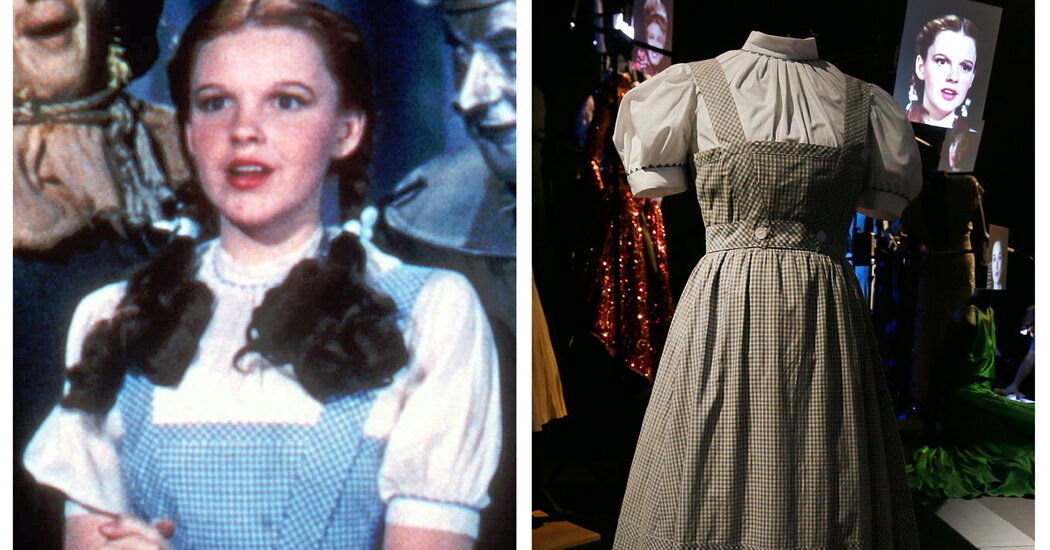 In an indelible scene from “The Wizard of Oz,” the vivid green Wicked Witch held a frightened Dorothy captive by threatening harm to her dog Toto if she did not give up her ruby-red slippers.

The scene was memorable not only for the bright red of Dorothy’s shoes, but also for her striking white-and-blue gingham pinafore dress — one of several that the teenage Judy Garland wore in one of the first major movies filmed in Technicolor, in 1939.

“The dress was a legend, but no one had seen it since the late 1980s,’’ Jacqueline Leary-Warsaw, the dean of the school of music, drama and art at the Catholic University of America in Washington, D.C., said on Friday. A priest who headed the drama department had been given the dress in 1973, but the university lost track of it.

Now the university hopes to auction it off for at least $1.2 million, with the money going to pay for a new film program. It goes on display on Saturday at Bonhams New York, 580 Madison Avenue in Manhattan, where the public can see it through April 29. Then, on May 24, it will be presented at the “Bonhams Classic Hollywood: Film and Television” auction in Los Angeles, Bonhams announced this week.

Garland wore several versions of the fragile blue-and-white dress, but only one other — used elsewhere in the movie — is known to still exist. Julien’s Auctions sold it for $480,000 in 2012. Bonhams sold the same dress again for nearly $1.6 million in 2015. The auction house also sold the Cowardly Lion costume worn by actor Bert Lahr for more than $3 million the previous year.

This second dress was found by chance last year, in a shoe box, inside a bag, sitting on top of some faculty mailboxes. It had been “a legend around the drama department,” Dean Leary-Warsaw said, but no one really knew if the story was true.

The tale was that a friend of Garland’s, Mercedes McCambridge, who was then an actress and artist in residence at the university, had given it to the school’s former head of drama, Father Gilbert Hartke, in 1973.

Photographs existed of it from that time, but the dress was “tucked away” in the 1980s and the university apparently lost track of it, the dean said.

That changed last year when Matt Ripa, a lecturer and operations manager at the drama school, was cleaning up in preparation for renovations of the Hartke Theater and found the bag on top of the mailboxes.

“I opened the bag and inside the bag was an old shoe box and inside of the shoe box, I saw the blue-and-white gingham dress,” Mr. Ripa recalled on Friday. “And I knew exactly what it was.”

He told a co-worker to grab some latex gloves, and he took some photos of the dress, which he said he had heard about since he was hired in 2014.

“It was one of those tall tales,’’ he said. “You heard stories from former students and faculty members about Father Hartke being gifted this dress,” adding “I had never laid eyes on it.”

After he folded the dress and placed it back into the box, he took it to campus archivists. They reached out to the Smithsonian’s National Museum of American History to help with authentication, Dean Leary-Warsaw said. She noted that the museum has the famous ruby slippers.

When she read about the find last year, Helen Hall, director of popular culture at Bonhams in Los Angeles, said on Thursday that she was astounded and immediately reached out to the university.

“These costumes are exceptionally rare and the collecting community thought that all extant dresses had been accounted for,’’ Hall said. “For one to surface over 80 years after the release of the film is incredible.”

The dress includes a fitted bodice, a high-necked blouse and a full skirt, with a fabric label inside inscribed “Judy Garland 4223.” Bonhams says the dress has been matched to the scene where Dorothy faces the Wicked Witch of the West in her castle.

In addition to paying for the new film program, the proceeds of the auction will be used to endow a faculty chair position in Father Hartke’s name, Dean Leary-Warsaw said.

“We love the dress, but it has never been displayed or shared broadly over the past 50 years and we hope now it will be,’’ she added. “And, maybe this will inspire others who learn about it to check their own closets and offices for hidden treasures.”

Monkeypox is a dangerous disease threat — but has one key difference from Covid, epidemic coalition says

Health officer uses a thermal head to detect a monkeypox virus on arriving passengers at Soekarno-Hatta International Airport in Tangerang near Jakarta, Indonesia on May 15, 2019. Jepayona Delita |…