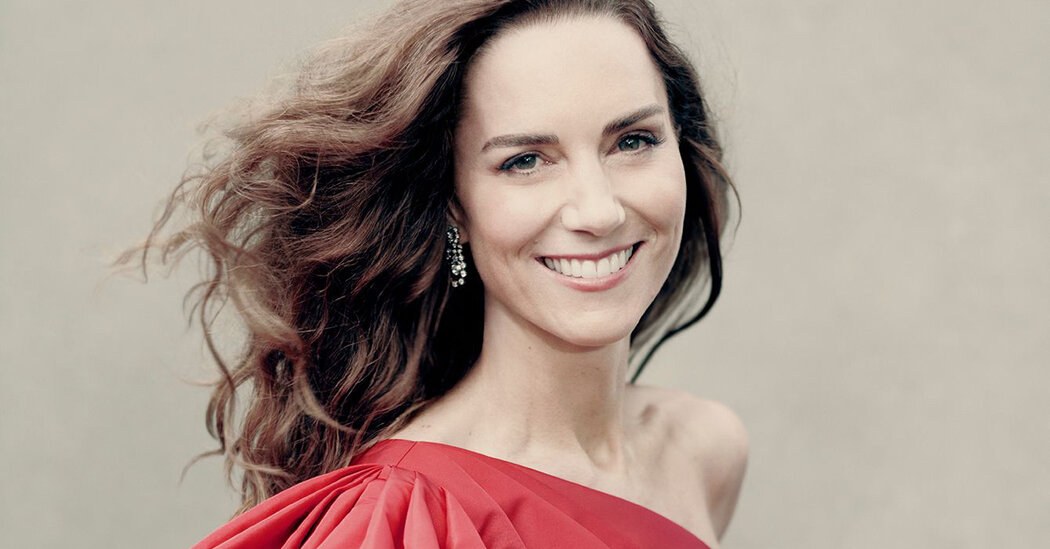 Catherine, Duchess of Cambridge, the commoner-turned-royal formerly known as Kate Middleton, wife of Prince William, mother of a future king, has turned 40. In honor of the event, three new portraits have been unveiled to the world, to go on display in three locations before becoming part of the permanent collection of London’s National Portrait Gallery, there to remain for posterity.

Taken by Paolo Roversi, the Vogue photographer known for his soft-focus time-out-of-time style and high romanticism, the Catherine portraits show the duchess in three different Alexander McQueen gowns — a choice that not only ticks the box of wearing British, but also continues Catherine’s relationship with Sarah Burton, the designer who made her wedding gown. According to British Vogue, the dresses, custom-made for the duchess, were created from fabric left over from previous McQueen collections, adding a frisson of sustainability to the shoot.

Two of the pictures are black and white: In one she is sitting in profile looking gracefully into the distance and wearing an off-the-shoulder gown with bows trailing from shoulders; in the other, she is in a ruffled one-shoulder top, facing the camera and grinning. In the third portrait, which is in color, she is in a red taffeta dress with a giant ’80s-worthy puffed sleeve, hands in her pockets, laughing.

In all, Catherine’s hair is loose, slightly tousled and windblown. Her makeup is minimal and her earrings, which came from the collections of her mother-in-law, Princess Diana, and her grandmother-in-law, Queen Elizabeth II, maximal, like the clothes. Her sapphire engagement ring is on full display. As portraits, they are neither aggressively modern nor stiffly old-fashioned, though in their composition they seem made for a mood board. She is exceedingly casual about her glamour.

Since the portraits appeared, they have been greeted generally with swoons, categorized as “dreamy” (Vanity Fair) and “dazzling” (USA Today). And they are unquestionably very pretty. But they are also a lot more.

They are the latest salvo in a narrative about the evolution of the House of Windsor that has become increasingly fraught with the departure of Meghan Markle and Prince Harry to California, their Oprah Winfrey tell-all and the looming shadow of Prince Harry’s memoir. They are a balm on the roiled seas of royalty; a decorous embrace of the requirements of joining “the Firm” bathed in the sepia tones of fairy-tale escapism, rather than a rejection. Not to mention a reclaiming of the spotlight.

And they are a stark contrast with the most recent Meghan and Harry photograph: the determinedly laid-back, old-jeans-and-bare-feet California-cool family snap that was the Sussexes’ Christmas card and that seemed like a direct riposte to the stultifying formality and strictures of the life they left behind. Look how happy we are now that we can be the real us!

In the three Roversi portraits, Catherine’s clothes and poses seem to make reference to royal portraits past, whether Princess Margaret as captured by Cecil Beaton in 1949 at age 19, Princess Diana caught by Mario Testino or the queen herself with her hands in her pockets on the cover of a 2019 book. Yet they also recall princesses of the Disney hive mind. Looking at them, it’s not hard to imagine Catherine waltzing away with a candelabra or some animated mice, skirts swirling.

In them, she is playing the part of the consort of the heir to the throne, an avatar of fantasy and someone who can bring it down to earth. It’s a delicate balancing act.

The effect is to connect the past to the present; to preserve the continuum while giving it a gentle gloss of contemporary values. To offer, with a little shot of pleasure, a justification for the continued existence of the job, and a case for the relevance of the second generation that will inherit it.