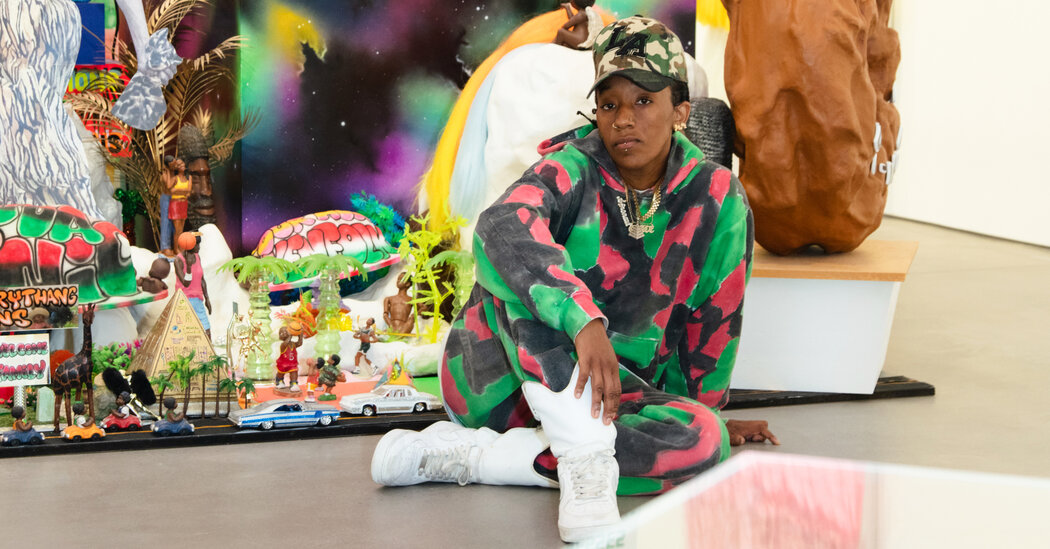 Just about every day around dawn, the artist Lauren Halsey heads out into South Central Los Angeles to collect things.

She gathers whatever items catch her eye along the way and takes photos on her phone. Those finds, together with the ephemera she has saved since her teenage years of making collages (magazine clippings, church figurines, shiny foil palm trees, miniature cars, aquarium plants), fill every corner of Halsey’s Los Angeles studio and gradually make their way into her artwork.

Now the latest iterations of those creations are on view at David Kordansky’s new gallery in Chelsea in a show that opened Friday, the artist’s first major solo exhibition in New York City.

“I’m documenting intersections that I need to return to or follow up on,” Halsey said in a recent interview at the gallery, where she was installing the show. “I’ve got to archive this thing or this person or this place or this spirit. Some days are easier than others — I find a business card. Other days I find a whole Sphinx. Or I find a figurine that rocks my world.”

“I’m an obsessive collector of objects, of images — scanning the streets,” she added. “I’ve been collecting as long as I could breathe.”

Dressed in a camouflage baseball cap, a purple fleece jacket and white high tops, Halsey exudes a low-key yet focused energy. You can see why she wakes up early and stays up late — “I have so much to get done” — and why a work is only finished when a deadline forces her to stop. “I can just keep going,” Halsey said. “I can keep adding layers.”

Through her installations Halsey is honoring the community that nurtured and inspired her — not only her mother, a teacher, or her father, an accountant, but the church, the convenience stores, her bus route, her relatives and community centers. She is also documenting a particular segment of society, elevating an urban vernacular that often gets devalued or ignored.

At a time when many Black artists are being recognized for figurative art, Halsey has been making large-scale sculptures and reliefs. And while her installations may allude to economic hardship, gentrification or gang violence, they convey an explosive sense of joy.

“She’s not trying to unpack notions of racism, she’s just trying to celebrate Blackness,” said the artist Charles Gaines, who taught Halsey when she was an undergraduate at the California Institute of the Arts. “She’s trying to bring into the realm of art things that are thought to be low culture, things that are victimized by a certain stereotype.”

This year, she was selected by the Metropolitan Museum of Art in New York for its prestigious roof garden commission, but it has been postponed until next spring because of supply-chain issues. (The roof will instead be used this summer as a place to sit and have snacks, with local D.J.s hosting dance parties on weekend nights.)

Halsey has perhaps become known as much for her activism as for her art, namely the community center in Los Angeles she started that became an important food pantry during the pandemic and her policy of making sure some of her art sells to collectors of color.

“Lauren is a builder — a builder of art, a builder of objects but also a builder of community,” said Thelma Golden, the director of the Studio Museum, where Halsey did a residency in 2014. “In that really potent combination is where her deep significance lies.”

For the Kordansky show, Halsey has created expansive sculptures populated by her collectibles in the palette of her neighborhood: hot pink, orange, green, yellow; painted boxes inspired by local signs and symbols; and what she calls grottos, including one with a functioning waterfall that she eventually wants to bring back home for children to enjoy.

The neighborhood is clearly the fuel behind Halsey’s work, namely the collage of symbols she described as its own form of placemaking, such as advertisements for batteries or weaves.

“All these things demystify what’s in the store,” Halsey said. “It’s important to archive not just the business name, but the painterly decisions they make to communicate to the neighborhood how they’re organizing the minimarket.”

She is paying tribute to the unsung workers in local organizations making a difference in people’s lives every day, calling them her “collaborators, the most genius community leader role models.” Halsey mentions the Sisters of Watts, for example, which offers after-school programs, and Vanessa’s Positive Energy, which offers dance lessons.

“Folks are doing the work — from providing Easter baskets to food to karate to tickets to the sports games to all the education support,” she said. “The issue is the infrastructure that makes it so hard to do the work. But the work is being done.”

“They are total pillars for me — they’re monuments within themselves,” she added. “I work closely with them. I’m lucky.”

The people who have populated her life find their way into her work, like her best friend’s mother from Mississippi or Franco Gaskin, a.k.a. “Franco the Great” or the “Picasso of Harlem”; she used to pass him on her way into the Studio Museum.

She described these personal references as inside jokes — “Oh, that reminds me of Sister Jenkins, oh, that’s Sister Fritz, oh, that’s Brother Washington,” Halsey said. “I get to go on these tangents over and over again.”

“I just felt she had the tenacity and the resilience and the guts to deal with the institution the way Doris Salcedo dealt with the Tate; she took on the institution and everything it stands for,” said Sheena Wagstaff, the Met’s chairwoman of modern and contemporary art. “That is what I felt Lauren had the capability of doing — poking it, probing it.”

Born in Los Angeles in 1987, Halsey initially wanted to be a professional basketball player and dreamed of playing for the University of Tennessee coach Pat Summitt as a Lady Vol. But she didn’t get recruited and, having enjoyed making stage sets for church plays, began taking architecture classes at a community college in Torrance, Calif. She then spent about a year studying architecture at California College of the Arts, but grew frustrated with the studio courses’ formulaic nature and pie-in-the sky plans.

“I can go crazy and make Disneyland, but that’s just not reality or where I’m from,” she said, “or else I would have seen it.”

Halsey transferred to CalArts in Santa Clarita, where she earned her bachelor of fine arts in 2012 before getting her master’s at Yale University in 2014. Upon seeing Halsey’s work at CalArts, Golden recalled, “My first reaction was one of utter awe.”

“She was forming a deep and profound vocabulary,” Golden added. “It was rooted in her biography, her sense of place, her sense of identity. Even in that first viewing it was clear to me it was about so much more.”

In 2018, Halsey was featured in the Hammer’s “Made in LA” biennial, where Kordansky was wowed by her work. “Lauren is one of the most important contemporary artists to come out of Los Angeles, California, in the last decade,” Kordansky said. “She’s documenting her place of birth, her community and place of origin but she’s doing it through this extraordinary vision of Pedro Bell, who made all of the early Parliament-Funkadelic records. The fantastical and the visionary are brushing up against the real.”

Somehow, Halsey has been able to reconcile her commercial success with the more challenged world she came from — in large part by giving back. Her Summaeverythang community center, which offers organic produce to residents of Watts and South Central Los Angeles, aims to “develop Black and Brown empowerment,” the website says, “personal, political, economic, and sociocultural.”

“It would be crazy for me to make this work about South Central that exists within a marketplace and not recirculate or recycle the rewards of that work to the neighborhood and to the people who need to benefit from it the most,” she said. “I can accomplish a lot in a sculpture, but that’s not a tutoring program, that’s not a food program.”

She also said she does not see her neighborhood through “the lens of darkness or constant trauma.” Rather, Halsey said, she sees its beauty and its humanity: the fertile ground she continues to draw from as an artist.

Halsey counts among her greatest influences the artists Betye Saar, Overton Loyd, Mike Kelley, Dominique Moody and Mark Bradford. Ultimately, she said, art for her is about getting “to the depths or the bones of what I care about,” what she said the singer and artist George Clinton calls “going for your funk.”

But don’t ask her to explain exactly what funk means. “I wouldn’t define it, because once you define it, it’s dead — you boxed it in, you flattened it,” Halsey said. “It’s an energy, it’s a life force, it’s something that I’m chasing every day.”

Everybody has a personal Elvis. He is there for us all, lodged in the collective unconscious, one of few humans who can legitimately be termed an icon, although it is…

At the Met, Protest and Poetry About Water

Schiaparelli, The Mother of Strange Fashion